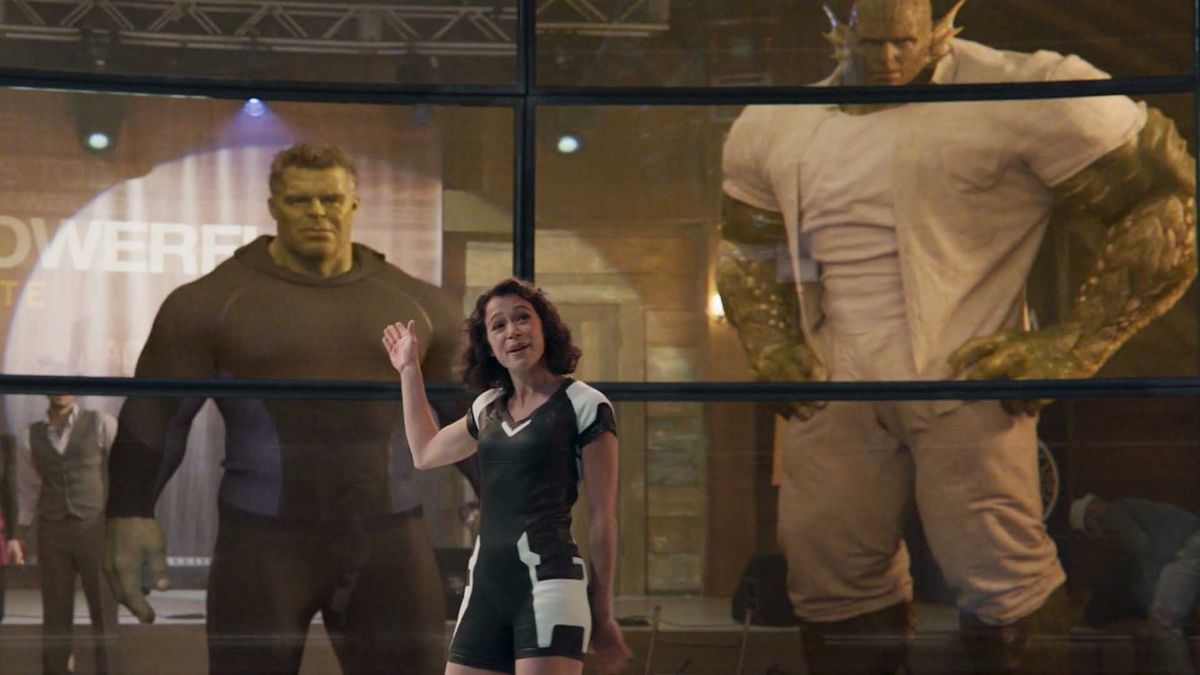 It’s the season finale of She-Hulk, and as you might expect, all things come to a head for Jen. As you might also expect, the showrunners take quite the unexpected turn and turn the MCU on its head. If you were looking forward to a formulaic, classic Marvel story ending – you haven’t been paying attention.

Where We Last Left Off…

In the last episode, She-Hulk went a little crazy at the Southern California Lawyer Awards when the internet troll group, the Inteligencia, hijacked the ceremony to air all of her dirty laundry on a giant screen. She-Hulk destroyed the screen and chased down a man in black who was filming her. Credits roll as we see SWAT aiming their guns at her.

The episode opens with Jen in a very familiar containment cell. It’s the one that Emil Blonsky, aka the Abomination, has been held in. When her friends/coworkers Nikki and Mallory come to visit, they have very different agendas. Jen wants to strategize on how to take down the Inteligencia, whereas Mallory points out that she is locked up and needs to work on her defense for Hulking Out. Mallory explains that she worked out a plea deal for Jen. She can go free but has to wear an ankle monitor.

It’s Not Easy Being Green

Free from custody, Jen falls from grace. She gets canned at work, and we see the rare moment when Jen is not in She-Hulk form at the office. This is only to clear out her things. She hears reporters outside of her apartment trying to get a word from her. On the news, an anonymous neighbor says they feared for their life with Jen in the building. Next thing you know, Jen has to move out of her apartment and moves back in with her parents.

She Won’t Just Lick Her Wounds

At her parents’ home, Jen spreads out and starts to work on bringing down the Inteligencia. With Nikki by her side, she gripes that Inteligencia is owned by multiple offshore shell companies, and it is going to be very difficult to find them and sue those responsible for the invasion of privacy. There’s a fun moment where Jen’s mom embarrasses her by sharing a video with Nikki that she found of Jen in high school dancing around with her friends. Nikki promptly asks Jen’s mom to send her the video.

Jen lies on her childhood bed, looking up at the ceiling – lost. In a fourth wall break, she says, ‘this isn’t even a reluctance superhero movie. I’m just getting screwed.” She texts Emil Blonsky to ask if she could take him up on his offer for her to stay at his compound for a while. Emil doesn’t answer, but Jen decides it’s okay to go anyways.

Nikki takes it upon herself to infiltrate the Inteligencia. She poses as a bro on the site and shares the video of Jen from high school, pretending to want to embarrass her. She gets a message from the head of Intelligencia, the HulkKing, who invites her to a She-Hulk bashing event.

Nikki enlists their lawyer friend, Pug – the one who introduced them to Luke Jacobson, to act as an Inteligencia bro and go to the event. Nikki drops Pug off at the event and ‘wires’ him with a Bluetooth headset. In the event, Pug mingles with a sea of bros, all bashing not just She-Hulk, but Lady Thor and other female heroes. This is clearly a dig at critics of the show.

With help from Nikki whispering in his ear, Pug blends in by claiming that Jen only got her powers because of nepotism and that she doesn’t deserve the Hulk powers. His rant catches the ear of Todd. Todd explains that not only did he create Inteligencia, but he is the HulkKing, and he was running the event.

The Guest of Honor

At Emil’s compound, Jen is greeted by Wrecker, who listens to her unload her problems. When Wrecker explains that Emil is at a private event down at the lodge, Jen decides she needs to go see him.

Unwittingly, Jen walks into the Inteligencia rally that happened to be at Emil’s compound. Todd had hired the Abomination as the guest speaker. Jen walks into to see Emil in Abomination form, which goes against his parole orders. When Todd and the others see Jen, they lash out at her, and Todd explains that he managed to get ahold of her blood. He then injects himself with her blood in front of everyone so that he can have Hulk powers

Todd immediately starts to transform into Todd-Hulk. This disappoints Jen, who thinks that this is a lame twist. Then Titania shows up, which only confuses Jen. Finally, the Hulk arrives amidst the chaos to defend her. At this point, Jen gets mad and breaks the fourth wall to say that this is a lazy finale. She asks the audience if we are okay with this.

That’s when the screen cuts out to the Disney+ menu. Viewers are led to think that something went wrong with the stream. Nope – it’s part of the show. She-Hulk then jumps out of her tv show and swings through the Disney+ menu down to Avengers Assembled.

She-Hulk walks through a Hollywood lot and in through a door that reads She-Hulk Production. Here, she addresses the She-Hulk writer’s table to complain that the ending is not what she wants. The writers explain that it’s the ending that Kevin wants. Kevin Feige, we assume.

She-Hulk demands to speak with Kevin, the writers refuse to give up his whereabouts. So She-Hulk pushes through them and through the Marvel Studios, fighting off personnel as she makes her way up to see Kevin.

Finally, She-Hulk breaks into a room where she is met with an orb-like robot dangling from the ceiling. The robot reveals itself to be K.E.V.I.N or Knowledge Enhanced Visual Interconnectivity Nexus. KEVIN asks She-Hulk. to transform back to Jennifer because she is very expensive, and the visual effects team has moved on to a different project. (Insert Black Panther drums)

Jen pleads her case with KEVIN on why the ending should be different. It is a lawyer show, after all. She explains that all of the MCU features are often too formulaic and that Todd injecting himself with Hulk blood (which she accuses of being suspiciously like Super Soldier Serum) distracts from the real story. the real story is how her whole life went sideways when she got her powers. KEVIN asks what she would like to change.

Jen and KEVIN agree to erase the Todd-Hulk part. Jen also insists that Hulk swooping down to save her doesn’t make sense. KEVIN argues that the Hulk was going to reveal juicy teasers about the MCU, but Jen cuts him off, and they agree to erase that part from the finale. Regarding Emil Blonsky, Jen just wants him to be held accountable for his actions.

Jen also takes the opportunity to criticize the MCU for its Daddy Issues and asks KEVIN when we’ll get to see the X-Men while winking to the camera. KEVIN interrupts her to say she’s ruined his algorithm. Jen jokes that that’s what Hulks do – smashes. She smashes crappy endings and sometimes Matt Murdock – another wink to the camera.

Back to the Show

She-Hulk returns to her show to see Todd in cuffs. With Titania filming and waiting for another She-HUlk smash, She-Hulk changes back to Jen only to tell Todd that she’ll see him in court. Daredevil drops from the sky (another request for KEVIN), and Jen says he missed the climax, but she’s happy to see him.

Jen and Matt Murdock, aka Daredevil, sit for a family picnic and Jen’s parent’s home. Jen’s parents grill Matt about his profession and how much money he makes, netting their daughter’s suitor.

That’s when the Hulk shows up and introduces the family to his son Skaar. Skaar is a brooding Hulk teenager.

The show ends with She-Hulk walking into court. She explains to a reporter that all the Todds of the world look out because she’s coming for them in both the legal and superhero sense.

Emil Blonsky sits in his containment cell. Suddenly, Wong appears and helps him escape to Kamar-Taj, with the two talking about wifi and open fridge policies as the credits roll. That wraps up the first season of She-Hulk: Attorney at Law! Thanks for watching along with us.