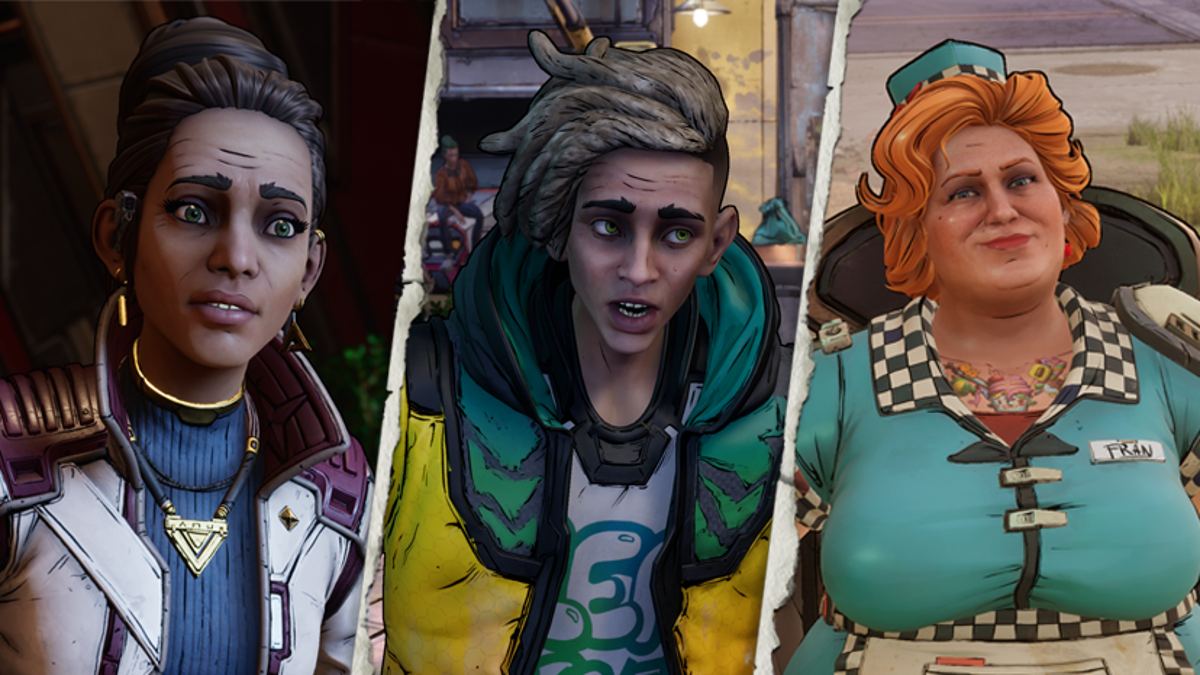 After a long wait, the New Tales from the Borderlands game is finally here, bringing with it a cast of new (with some old surprises) and interesting characters. This amazing new cast would be nothing without the voices behind them, though, so we wanted to show a little appreciation for all of their hard work by detailing the stars behind each one. So, here’s a list of every known actor and actress that make up the roster of New Tales from the Borderlands.

Diego Stredel is the voice of the character with the most swag in New Tales from the Borderlands, as well as the one with the least common sense, Octavio Wallace-Dhar. Of the three protagonists, he’s arguably the goofiest (though Fran does have her moments), and the actor does a great job of portraying this.

Stredel is best known for his work playing Alejandro Ruiz in the Imperfects, Benny in Madam Reaper, and Doug in Broken. New Tales from the Borderlands is his first video game credit.

While relatively new to the acting and voice acting industry, getting her start back in 2019 in The Outer Worlds as Junlei Tennyson, Michelle Rambharose not only lends her voice to New Tales from the Borderlands, she’s also one of its stars. The actress is responsible for Anu in the game, the brilliant yet awkward scientist with a bleeding heart.

Alongside her work in New Tales From the Borderlands and Outer Worlds, Rambharose is also best known for playing side roles in movies like Best Sellers, Workin’ Moms, and The Bold Type.

Everyone’s favorite crude and always-aroused Pansexual, Francine “Fran” Miscowicz is played by none other than Lucia Frangione. She’s well known in the entertainment industry, as she’s an internationally produced, award-winning actor and author with twenty-five stage plays to her name.

Frangione uses those skills to put on a hilarious performance as Fran, delivering plenty of comedy, wit, and dry humor while voicing the character.

Outside of the main protagonists, LOU13 is obviously the star of the show, as his dry, literal humor and lovable nature is such a treat. Yet, none of this would be nearly as funny if it weren’t for the personality and tone that actor Temapare Hodson delivered when voicing the role.

Surprisingly, Hodson is a relatively new voice actor, as he only has one other role credited to him before playing LOU13 in New Tales from the Borderlands, and that is as Hurricane Harrigan in the PAW Patrol television series.

If LOU13 is the best happy robot in New Tales from the Borderlands, Brock is, without a doubt, the best evil robot. This talking gun works for the Tediore company and just really likes to shoot people. He’s played by Erik Gow, a veteran actor who has been around since 2007.

Gow is best known for playing Mr. Parker in DC’s Legend of Tomorrow, and Charlie Beckett in Christmas Takes Flight. His role as Brock in New Tales from the Borderland is his first-ever video game credit.

Now that we’ve got the good and evil robots out of the way, it’s time for the most neutral one, Timm-E. Serving as that assistant to Rhys Strongfork at Atlas, Timm-E is programmed to do whatever his boss says, but in the most cheerful way possible, and boy does actor Christian Lagasse does a great job of conveying a happy tone, even while giving bad news.

Does Rhys Strongfork sound a little different to anybody else? If you have that question, then don’t worry, you aren’t losing your mind, as the character features Ray Chase in the role instead of Troy Baker, who turned down returning.

While it might seem like a big deal, it’s pretty easy to get over, as the actor does a solid job getting down Rhys’ nuances for the short time he’s in the game. This makes complete sense, as Chase is a veteran voice actor that’s appeared in dozens of different acting roles since starting in 1995, including Noctis Lucis Caelum in Final Fantasy XV, Ryomen Sukuna in Jujutsu Kaisen, and B. Mitch Reed in Licorice Pizza.

Unlike Baker, Fiona’s voice actor, Laura Bailey, did indeed return to her role in the sequel, making a brief appearance as Fiona, the female lead protagonist of Tales from the Borderlands. If you’ve ever played a video game before, then there is no doubt that you’ve heard this actress’s voice, as she’s been in just about everything over the past two decades.

Bailey is best known for her role as Mary Jane Watson in Marvel’s Spider-Man, Kait Diaz in Gears 5, and Abby in The Last of Us: Part II.

While we don’t get to see nearly as much of the character as she is deserved, Marguerite Hanna puts her all into her brief performance as Stapleface, the now reformed psycho who helps Anu survive her harsh introduction to the world when she arrives from space.

Hanna is an up-and-comer in the entertainment scene, with only two credits to her name outside of New Tales from the Borderlands, as Saleswoman 2 in i.o.u.r.l. and Ashley in Reginald the Vampire.

The big bad of New Tales from the Borderlands, Susan Coldwell’s cold, yet authoritative voice is done by renowned actress Samanta Ferris, who has been around in the entertainment industry via various films, TV shows, and video games since 1995.

Ferris is best known for her roles as Dr. Raully in Stargate SG-1, Rhoda Morrison in Devil in Ohio, and Sally Po in the Mobile Suit Gundam Wing series. New Tales from the Borderlands is her third such video game role, previously lending her voice to two CSI games and SSX on Tour.