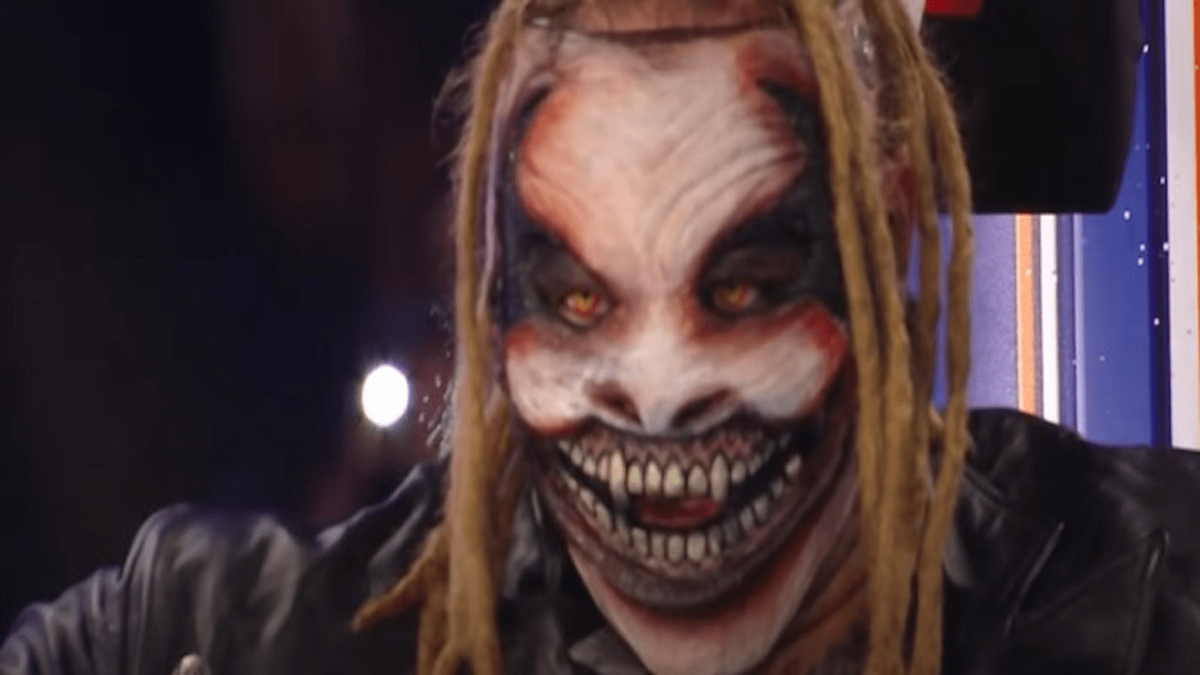 Bray Wyatt made his return to WWE at the Extreme Rules pay-per-view last weekend to a euphoric crowd reaction after being released from the company last year. It remains to be seen how Wyatt’s return will be executed going forward but the dark and supernatural elements associated with him seem to be fully intact. During his haunting return, Wyatt debuted a sinister new mask that seems to be a key part of his look going forward. Wyatt’s run in WWE has seen him and his stablemates adopt many masked appearances to varying degrees of creepiness over the years. Here’s our breakdown of every mask that has been featured in Bray Wyatt’s Career in WWE.

Bray Wyatt is best known for his time as the southern leader of the deranged Wyatt family which terrorized WWE for years. Wyatt was regularly seen with both of his followers Luke Harper and Erick Rowan. Of all the members of the Wyatt family, Rowan can be said to have the most disturbing appearance, portraying himself as a boiler suit-wearing mindless brute, with a terrifying sheep mask to boot. The sheep mask became synonymous with the Wyatt family, and a symbol for Bray to show that his followers were his flock. This was cemented when Wyatt led a whole choir of children in sheep masks in a haunting rendition of ‘He’s Got The Whole World In His Hands’ in the build-up to his clash with John Cena at WrestleMania 30.

It was later revealed that the most striking symbol of the Wyatt family was in fact down to a series of coincidences. Speaking to Sports Illustrated, Erick Rowan revealed that the reason he opted for a boiler suit was that Luke Harper was already wearing jeans as part of his look. Aiming for his character to have a distinct look from Harper’s Rowan, chose the boiler suit as he didn’t want to wrestle in trunks. The sheep mask was simply bought from a Halloween store by Bray Wyatt, Dusty Rhodes advised Rowan against wearing a mask at the time as he had a unique face.

“You are the man in the woods.”

In 2019, Bray Wyatt took the wrestling world by storm with the reveal of the Firefly Funhouse. This allowed Wyatt to totally repackage his character as a deranged Mr. Rogers-style presenter in a twisted children’s TV show in the same vein as the hit YouTube series Don’t Hug Me I’m Scared.

Fans quickly caught on that there was something sinister afoot, and after weeks of build-up Wyatt revealed his monstrous darker half, The Fiend. Wyatt and The Fiend existed as two separate entities with the latter serving as a supernatural threat that would target Wyatt’s old rivals on the WWE roster. The Fiend’s unique design and character were also foreshadowed as far back as 2015 when Bray was still leading the Wyatt Family.

In the YouTube spin-off series, Superstar Ghost Stories, Wyatt tells of his encounter with the man in the woods growing up in Louisana. Wyatt describes the man as being pale-faced with thin yellow hair and cat-like eyes, this would be incorporated into The Fiend’s design.

Wyatt ends his story by revealing that his sister, Abigail, told him that he is the man in the woods. This implies that either The Fiend is a spirit that has possessed Bray or has always been a part of him since he was a child. Regardless of whichever is true, it’s an example of Wyatt’s creativity and capacity for long-term storytelling.

Bray would reveal this look at Fastlane 2021 following a feud with Randy Orton. Wyatt would target Orton in a revenge bid after he burned down the family compound but suffered a brutal defeat in a Firefly Inferno match at TLC 2020. The Fiend was set alight by Orton at the end of the match and disappeared from TV for almost three months.

With help from Alexa Bliss, The Fiend was eventually revived and looked even more monstrous than ever before. This variation of The Fiend was shortlived however as his mask would be healed prior to his rematch with Orton at Wrestlemania 37.

It really is a friendship that will never ever end as the Firefly Funhouse cast are back with a creepy new look.

The Firefly Funhouse puppets served as Bray’s loyal co-stars but were frequently abused, maimed, and killed by Wyatt before appearing in the next episode unharmed. Each of the funhouse puppets acts as a throwback to Bray Wyatt’s past. Huskus the Pigboy for instance is a nod to Wyatt’s unsuccessful debut as Husky Harris in 2010.

The live-action versions of the puppets which debuted at Extreme Rules last weekend seem far more intimidating and sinister. Bray’s sidekick Ramblin’ Rabbit has gotten a major Donnie Darko-style makeover that is the stuff of nightmares. Fans have also picked up on some easter eggs. Wyatt has seemingly honored the memory of Luke Harper who passed away in 2020 by having the Sister Abigail actress don the same mask as Harper when he was one half of the Bludgeoning Brothers tag team.

Many have theorized that the Firefly Funhouse cast will make up the ranks of Wyatt’s new faction The Wyatt 6 which has been teased on Twitter.

Bray’s new look at Extreme Rules saw him clad in all black – a stark contrast to his deep South cult leader gimmick and even more so to his Funhouse persona. The new mask is first seen in a pre-recorded distorted video package where Bray asks the audience ‘Who killed the world? We did.”

Bray’s appearance on stage gave us a proper look at the mask which seems heavily inspired by The Grabber, the villain in Scott Derrickson’s supernatural thriller, The Black Phone. The mask worn by Wyatt was designed Jason Barker, a VFX artist on The Black Phone who has designed masks for the heavy metal band Slipknot and provided the design of The Fiend’s mask.

It remains to be seen how Wyatt’s new mask will fit into his new storyline and repackaged gimmick but it’s safe to say that it’s an exciting time to be a fan of professional wrestling.

That’s everything we know about Bray Wyatt’s masks in WWE. Be sure to check out the rest of our wrestling coverage including our breakdown of MJF’s potential babyface turn in All Elite Wrestling.