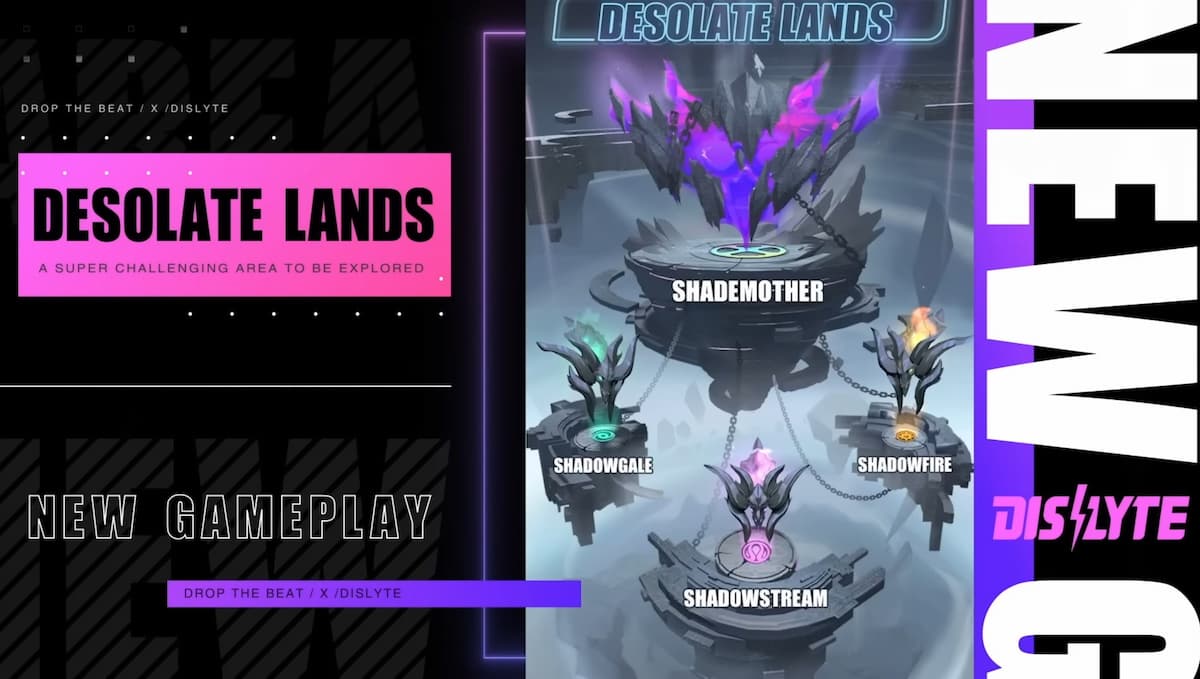 A new player in the gacha market, Dislyte was the subject of controversy within its first few weeks of launch. The game was pretty hostile towards rerolling, it had a ludicrous pity system for its first proper event, and most importantly, the endgame content was just boring.

After spending a couple months with the game, I quickly found myself slowing down and getting less excited to log in to play. The endgame content consists of little else aside from grinding for Relics to perfect your character builds, and even that was soul-crushing, as you were subject to the whims of RNG. With the new Desolate Lands mode, however, we’re finally starting to see a much-needed shakeup in Dislyte’s endgame.

While it’s not the proper co-op raid mode that most players might have been hoping for, Desolate Lands does two important things: first, it gives players more control in Relic farming, and secondly, it’s a challenging bit of PvE content that actually requires strategy and smart team-building.

The three bosses in Desolate Lands drop Boost Stones, which can be used to improve the quality of specific sub-stats on your Relics. What this means is that once you’ve finally farmed the perfect Relic with all the main and sub-stats you want, you no longer have to hope and pray that the correct sub-stats get enhanced as you’re upgrading them. The Boost Stones let you pick the sub-stats you want to enhance, cutting out a rather significant chunk of RNG from the upgrading process.

Don’t get me wrong; it’s still a massive pain to try to farm a full set of perfect Relics for your entire team, and farming Boost Stones is very time-consuming as well. However, it’s still a big step in the right direction, especially for players who really want to min-max everything in this game. It’ll drastically raise the ceiling of high level PvP, while also rewarding the average player who decides to put in a little more effort into organizing their Relics.

Desolate Lands is also quickly proving to be a much more enjoyable mode than the Temporal Tower, which was the only form of endgame content we had in Dislyte prior to the Bloody Hunt update. The problem with Temporal Tower was that the rewards started to feel insignificant over time, and the opposing teams you had to go up against were often ridiculously cheesy compositions that you could virtually only beat with one fixed strategy.

On the flip side, while Desolate Lands does feature important mechanics that you need to play around, it also allows for much more flexible team compositions and strategies. Granted, you do still need Clara for at least one of these fights, which can be frustrating considering how difficult it is to pull Legendary Espers in Dislyte. At this point, not having Clara on your team feels like you’re at a distinct disadvantage, and I do feel that the other support Espers might need a bit of a buff to keep up.

All that aside, the Desolate Lands bosses challenge players with coming up with effective team compositions to get around their mechanics. You might need heavy AoE attackers in one fight, but prioritize AP manipulators and controllers in another. Or maybe you need proper cleansers in one fight, and single-target DPS specialists in others.

This mode requires players to have a good understanding of all their Espers’ abilities, as well as the knowledge to put together an effective team for each fight. It encourages build variety, rather than just sticking with the same few Espers you used to power through the story mode weeks ago.

Dislyte still needs plenty of work when it comes to delivering on engaging endgame content and proper character balances, but Desolate Lands is quickly proving to be a solid step in the right direction.