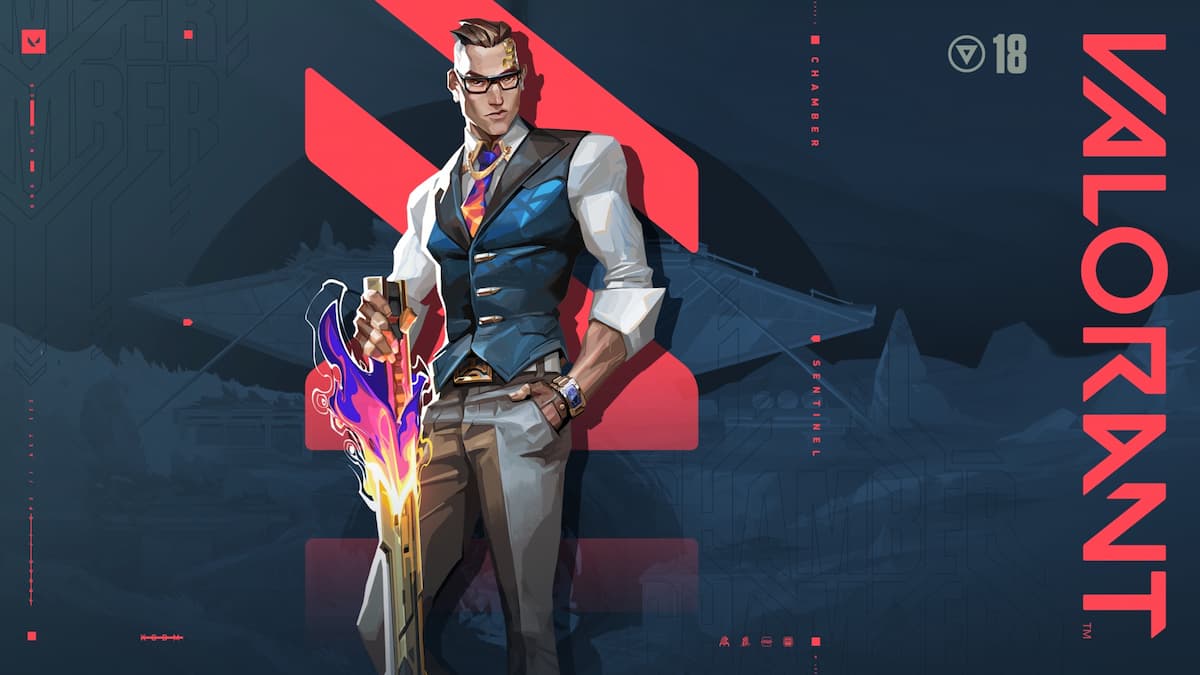 Chamber has proven incredibly popular since joining Valorant’s roster last year. Unlike many other Agents in the game, his utility is unique in that it is almost exclusively designed around pure gunplay. This is especially unusual given that he’s actually intended to fill the defensive, sentinel role. Where other trap-heavy Agents such as Killjoy and Cypher use utility to lock down sites, Chamber is envisioned as a sentinel who holds space by out-aiming his opponents.

It’s actually a very interesting concept and one that has proven to work well in practice. So much so, in fact, that Chamber’s pick rate has been through the roof across both professional and ranked play.

In pro esports games, his utility is considered highly valuable not just because of its offensive firepower but its passive econ boost — when everyone else is saving, Chamber can prove a difference-maker with his Headhunter and Tour de Force, and then he has access to a huge pool of money for the next round given that he spent virtually nothing in the previous.

In ranked, well… players love tapping heads, which is Chamber’s specialty — especially when they’re free of any obligation to use utility to help their teammates as other Agents are.

The net result is that every other sentinel in the game had up until recently seen less use in professional play, while in ranked Chamber had (and still is) become a sort of go-to pick for ego-peeking ranked demons.

Riot Games had to act, and act it did, except the nerf it issued has been controversial. Why? Because instead of nerfing Chamber’s firepower, Riot removed the one aspect of his kit that many felt made truly made him a sentinel: his Trademark trips, which activate when an enemy approaches and slow them considerably if not destroyed. They have unlimited range and are extremely effective for flank-watching and/or slowing choke points.

For a month now since the patch, Chamber only has a single trip, which massively reduces his ability to perform conventional sentinel duties and generally help his team beyond popping off with his big, shiny, golden guns.

It’s caused an uproar, not just from casual ranked players but professionals, too. Why, people have wondered, did Riot not nerf the extremely powerful Headhunter, which is essentially a Guardian, for a few hundred credits? What about the silly operator that fires as fast as a Marshall? How is Chamber able to teleport every 20 seconds?

So you’re telling me a round in Valorant is 100 seconds long, planting the bomb adds 45 seconds so this allows chamber to TP up to 7 TIMES in a round. nerf pls.

Players are beside themselves, wondering how the trip, the one defensive, sentinel-like piece of utility, was the aspect of his kit that was nerfed. That isn’t why Chamber is such a popular Agent, after all, right?

The thing is that Riot’s Chamber nerf actually does make perfect sense and was the correct action to take to meet properly fulfill his intended role. If you consider that he was designed as a sentinel who holds space with firepower (as explained by Riot in the patch notes), the reduction in the number of trips available to him has only leaned him further into that design.

The problem with Chamber prior to his nerf wasn’t that he was too good at his role; it was that he was simultaneously performing a role that he was never intended for: flank-watching, and denying space with utility.

Consider the result of the Chamber nerf in professional play. Killjoy is back, and Cypher has also made a return (even if he still needs a buff). Professional teams are now faced with making a tough decision when creating their Agent compositions for different maps: Do they go with a trap-heavy sentinel capable of locking down areas of the map and holding the flank, or do they give that up and play a more aggressive defensive style with an Agent who suits a player capable of popping off?

There’s a tradeoff with choosing Chamber following the buff, and that’s exactly what you want within a game meta. You want to encourage different Agent compositions by balancing their capabilities and making lots of combinations viable.

Ok, so I’ve praised Riot Games’ decision-making, and the effectiveness of the Chamber nerf at the professional level. Now it’s time for a reality check: nobody in ranked plays Valorant properly, and nobody cares about choosing optimal Agent compositions for a given map. I know this because I play Valorant scrims, take part in minor leagues and tournaments, and occasionally torture myself by playing ranked in Immortal lobbies.

If you didn’t already know, let me assure you that the ranked Valorant experience is rarely played with even a tenth of the strategy of a professional game (or a try-hard team like mine who attempts to play the game like the pros).

The issue is that even following the nerf, Chamber is still a ranked demon’s instalock of choice, and removing one trip has only made him more unbearable to play alongside in ranked play. Even when Chamber had two trips, half the players who used Chamber in ranked never bought them and never felt even slightly obliged to put one in a useful position for their teammates. Now there’s only one. Now I’m relying on my average instalock Chamber to “keep map control and defend space,” as Riot puts it. Yeah, not happening. Every round is as predictable as the last — 3,2,1, over-peek, and die.

I find myself wishing we had a Killjoy or Cypher a lot of the time. But who the hell plays those Agents? Boring, am I right? Pew, pew Chamber is much more fun!

I’m kidding, of course. I think both of those sentinels can be incredibly fun to play, but that’s definitely a minority opinion and one that’s reflected in Chamber’s ranked pickrate: 57% versus 23.2% for Killjoy and a dismal 11.3% for Cypher (that’s only a percent higher than poor old Phoenix, who I wrote about the other week as needing a buff ASAP!).

What to Do About ‘The Great Chamber Problem’

So, despite a nerf, which I really do believe has been successful in helping Chamber meet his intended role and bring other sentinels back into the spotlight, there’s still an issue: the change is effective at the professional level, but more or less useless in ranked. And to think, professional esports comprises a tiny percentage of Valorant’s overall player base, while ranked is obviously the vast majority. Which is more important? Which should be given priority here?

At its core, the problem feels as though it lies in Chamber’s design, which, as I described earlier, is inventive and clever but only if we’re assuming everyone is choosing Agents according to what is actually optimal for each map. But again, that isn’t reality. Killjoy might be meta on Ascent, but I could play 10 ranked Immortal games today on the map, and I’m almost certain all of them would feature a Chamber.

In the end, then, the obvious fix does seem as though it might be to make the nerfs to his gunplay that everyone wants. Perhaps the Tour de Force should have a slower rate of fire or fewer bullets? Maybe the Headhunter shouldn’t hit for 160 at all ranges? It’s hard to say what would actually make sense, and whether all but the harshest of nerfs would prove effective. Maybe the fix is to heavily buff the other sentinels? But would ranked players even care? I’m not so sure.

I don’t envy Riot’s development team in making the call, but it’s clear Chamber will remain an everpresent force in Valorant ranked until something is done.