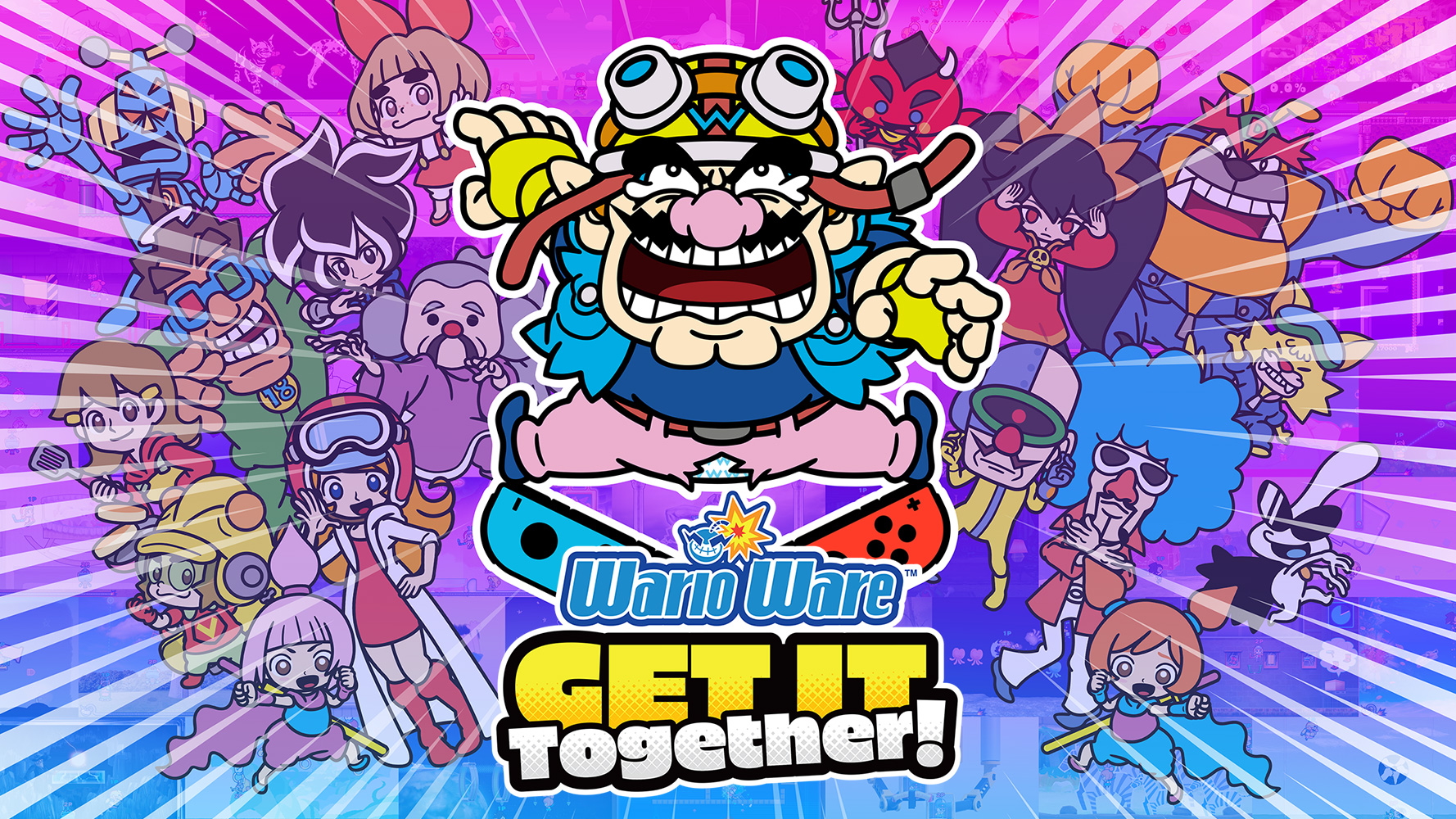 WarioWare: Get It Together! on Nintendo Switch

Veterans of the WarioWare series know exactly what to expect when it comes to each new entry in the franchise, and the latest game, WarioWare: Get It Together!, is no different. If you’ve played any WarioWare game before, you’re probably already anticipating the fast-paced wackiness of this new title.

Newcomers to WarioWare might be reading reviews like this one to try and figure what the heck this series is all about. Microgames with toilet humor? It definitely doesn’t seem like a typical video game, and that’s because it’s not.

WarioWare takes you through various levels that first showcase a character through a quirky cutscene, and then they throw you into a series of microgames that test your reaction time and ability to follow directions.

There is a very quick instruction before you must complete the task in roughly four to five seconds. The pace gets faster and faster, so you must stay on your toes, and every level has a boss round that corresponds to that level’s theme.

Typically, each WarioWare game has a gimmick that showcases the tech of the console it’s on.

WarioWare: Twisted! has gyroscopic capabilities in the Game Boy Advance cartridge to tilt the game left and right, WarioWare: Touched! utilizes the DS touch screen so players could tap their way through the microgames, WarioWare: Smooth Moves features the Wii Remote’s motion controls in creative ways, and so on.

I always thought that the Switch would be an exciting console for a new WarioWare game. After all, it blends so many of Nintendo’s best console gimmicks into one device: it has motion controls with the Joy-Con, gyroscope with the Pro Controller and in handheld mode, and the ability to play both on the go and on your TV. There could be so many microgame possibilities to showcase all of these features.

So when I learned that WarioWare: Get It Together! takes a different route by using the series’ characters instead of the Switch’s hardware in creative ways, I was a bit surprised. It felt like a missed opportunity, but it also made sense; Nintendo would want to make sure the game is fully playable no matter what type of Switch you have.

I admit that although I initially had reservations about it, the gimmick of each character having their own abilities works fairly well in WarioWare: Get It Together. At the beginning of the game, you start off with only Wario, who can hover in any direction with his jetpack and dash left or right.

Very quickly, you unlock more characters, each with their own way to play. For example, Cricket can leap high into the air, Orbulon vacuums up objects into his spaceship, Mona rides around non-stop on her scooter and uses her boomerang, and 5-Volt can teleport anywhere on the screen.

You can pick three to five characters you’ve unlocked to randomly rotate between during each level. During the main story, one of those slots is locked to that particular level’s main character, who is introduced with a cute cutscene like they are in previous WarioWare games.

All of the microgames can be completed with any of the characters, so it really doesn’t matter who you choose. However, if you’re like me, you’ll probably end up gravitating towards the same three or four characters on every level. Some of them are just universally easier to use than others on any microgame thrown at you.

Selecting difficult-to-use characters, such as 16-Volt (who does not move on his own and can only shoot discs), can make some of the microgames more challenging, but you’re given four lives on each level, so a mistake or two won’t matter.

In fact, WarioWare: Get It Together! is made even easier and more accessible to all with the addition of an in-game currency called Wario Coins. They can be used as “continues” to give you all four lives back if you run out. Completing a level for the first time awards 1,000 coins, and it only requires 100 to continue a level without losing progress.

If you’re really stuck on how to complete a microgame with a certain character, you can practice freely in the Play-O-Pedia, which documents all of the games you’ve seen on every level.

For completionists, there are hundreds of missions you can work towards for Wario Coins, such as clearing microgames under specific conditions or throwing all of the names and job titles off the screen in the credits.

I enjoyed the story mode in WarioWare: Get It Together!, and although I used mostly the same characters each time, it was fun to try out each newcomer in previous levels to see how their special ability could be used. I was pleased to see that just like in older WarioWare games, there was additional content after the “story” had been completed.

As always, there’s a Nintendo-themed level, and every time this is the level that is my absolute favorite to play. If you’re a big fan of both Switch games and retro Nintendo games, you’ll have a blast playing each of these microgames and recognizing where each of them originates.

The plot of Wario chasing bugs throughout his game isn’t the quirkiest the series has seen, but it’s cute and entertaining to follow. There are plenty of familiar faces from the franchise that you’ll encounter along the way, each of who plays a role in helping Wario with his problem.

There are a few other modes you’ll find in WarioWare: Get It Together! that you can play after you’re done with the main story.

One of these is the Variety Pack, which is home to multiplayer games. You can team up with one other person in the story mode if you choose, but the Variety Pack has 10 additional modes, most of which can be played with two to four players.

The majority of these Variety Pack games aren’t particularly fun beyond playing them once to check them out. They’re labeled as party games, but most are just slightly different takes on completing the same microgames in different ways to compete with your opponent.

One example is a game of air hockey, and the person who scores a goal can play a microgame to score a point while the other person tries to prevent them from successfully completing the microgame.

My favorite Variety Pack game is one in which two to four players compete in microgames, and whoever completes it first can place a flag on a board to create triangles. The person who is able to create the largest triangle by the end is the winner.

There’s even a Variety Pack mode that is a Super Smash Bros. clone, though the character choices are just far too unbalanced for it to be fair or fun (anyone who picks Ashley or Orbulon is basically playing on easy mode).

I don’t think WarioWare: Get It Together! is a great party game, strictly speaking, but there are likely to be one or two of the multiplayer games that you and a friend or significant other would have fun laughing through together. You’ll probably have more fun playing with someone else through the main story mode, honestly.

The second extra mode is called Wario Cup. This is a special challenge mode that rotates objectives on a weekly basis, such as time trials and score attacks. You can turn on rankings to see where you size up worldwide and with friends.

Unfortunately, there does not seem to be a way to challenge players or friends online in microgames. In my opinion, this would have given WarioWare: Get It Together! longer legs to extend my enjoyment of the game, especially since the premise of the game seems to be playing together.

The only other way to connect with friends is by playing via local wireless with two Switch systems. It’s disappointing that in 2021 there is no way to face off against my friends online in WarioWare microgames.

The last bit of fun that I had with WarioWare: Get It Together! was spending my Wario Coins in the Emporium. You can exchange coins for “Prezzies” of different rarities that you can gift to each of the characters to increase their level and unlock different color customizations for them. It takes a ton of coins to unlock everything, which had me grinding in the story mode to collect more coins so I could make Ashley a pretty pastel color.

WarioWare: Get It Together! is exactly what you’d expect from a WarioWare game, for better or for worse. I did hope for a little bit more from this Switch title; WarioWare: Gold for the 3DS seemed to have better value with 100 more microgames, full voice acting, and a lower price tag. The Switch game just feels like it’s missing something.

However, WarioWare: Get It Together! is simply fun. It’s an entertaining game to play in short bursts when you have some downtime or when you’re in the mood for something a little zanier.

For those new to the series, keep in mind that these games aren’t about the number of levels or length of time it takes to complete the story. There is fun in replaying each of the levels to get the highest score possible and unlock all of the microgames. For returning fans, well, you basically know what to expect. It’s just more of the WarioWare we love.

WarioWare: Get It Together!