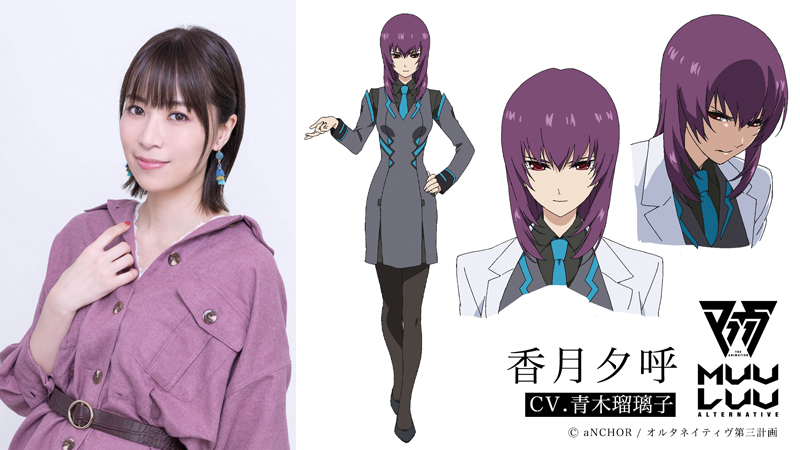 Today, following a premiere screening of the Muv-Luv Alternative anime in Tokyo Avex Pictures revealed the character design and voice actors for a few key characters.

Yuuko Kouzuki is voiced by Ruriko Aoki, whom you may know as Riina Tada in The Idolmaster Cinderella Girls, Dido and Sirius in Azur Lane, and Tresa Corzone in Octopath Traveler,

Marimo Jinguuji is voiced by Sayumi Watanabe, known as Birmingham from Azur Lane, and Freezing Astaroth from Combatants Will Be Dispatched!.

Kasumi Yashiro is voiced by Kanon Takao, who lent her voice to Noelle in Genshin Impact and Hermit Mio in Edens Zero.

The star player of the cast is likely Norio Wakamoto, who reprises his previous role as commander Paul Radhabinod. He’s known for a gazillion of relevant roles including Oskar von Reuenthal in Legend of the Galactic Heroes, Cell in Dragon Ball Z, Dracula in the Castlevania series, M. Bison in the Street Fighter series,

The star player of the cast is likely Norio Wakamoto, who plays commander Paul Radhabinod. He’s known for a gazillion of relevant roles including Oskar von Reuenthal in Legend of the Galactic Heroes, Cell in Dragon Ball Z, Dracula in the Castlevania series, M. Bison in the Street Fighter series, and Xemnas in the Kingdom Hearts series.

As a bonus, we also learn that Kotobukiya is going to release a brand new, anime-inspired plastic model kit of the Type-97 Fubuki.

If you’d like to take a look at the anime, which will air officially on October 6, you can also watch the latest trailer and reveal, and the previous trailer.