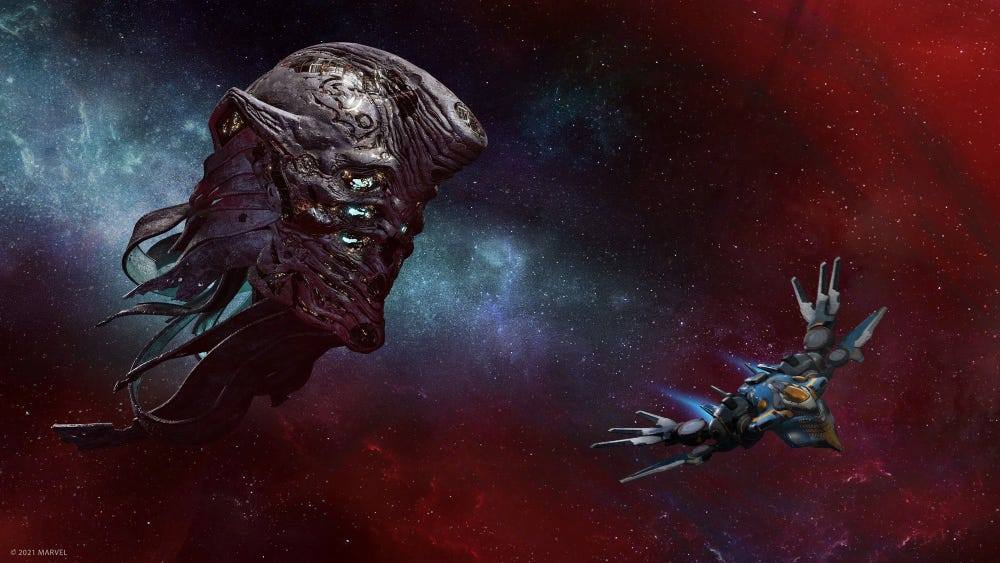 Ever since Marvel’s Guardians of the Galaxy was revealed at the Square Enix Presents E3 2021 showcase, fans have been wondering what exactly the game will do to help it stand out when compared to other Marvel video games and its MCU movie counterpart. So far, Eidos Montreal has answered a lot of those questions, releasing plenty of trailers and information regarding the upcoming third-person, single-player, story-driven adventure.

We know that players will take the role of Star-Lord, aka Peter Quill, and that they’ll have the ability to lead the Guardians with unique action prompts that direct the AI-controlled companions to execute special moves. It’s also been no secret that music will play a large role in the game, as it’ll feature licensed tracks and a Star-Lord album.

Despite everything that has been released promoting the game so far, though, the question of the game’s story, setting, and worldbuilding is still a bit of a mystery. That was until a recent preview event revealed a lot of important information regarding the game’s direction, including how big of a role Peter Quill’s ship, the Milano will play in Marvel’s Guardians of the Galaxy.

In what he calls the “Milano Moments” Eidos-Montreal creative director Steven Gallagher had the following to say regarding the importance of the ship and how they want players to feel at home when exploring it.

The Milano moments are a really important part of the Marvel’s Guardians of the Galaxy experience. The Milano represents the home of the Guardians.

And throughout the adventures, they go to different locations and each time they are going to fly away, go to other locations, but they will spend time in the Milano. The player will have opportunities to take as much time as you want or as little time as you want to really explore the Milano and explore different stories with your Guardians.

In the Milano, you can go into different rooms of the different characters and there is a lot of show don’t tell; a lot of visual props that will speak to the identity of all of The Guardians. We also have collectibles that can be found by exploring different places you go in the galaxy that will show up in the rooms of characters they are connected to.

Alongside the collectibles that can be picked up along the way, players will also be able to throw on music, interact with other Guardians, and learn bits of lore by exploring the Milano. This isn’t limited to a few interactions either, as conversations and unlockables help the Milano grow as much as the Guardians do as the narrative progresses, making the ship feel like one of the crew.

Marvel’s Guardians of the Galaxy is coming for PS5, PS4, Xbox Series X|S, Xbox One, and PC on Oct. 26, 2021. It’ll also come to Nintendo Switch via cloud. For more information on the game, be sure to check out our hands-on preview event coverage, with goes into depth about the music, combat, and narrative you can expect from the game.