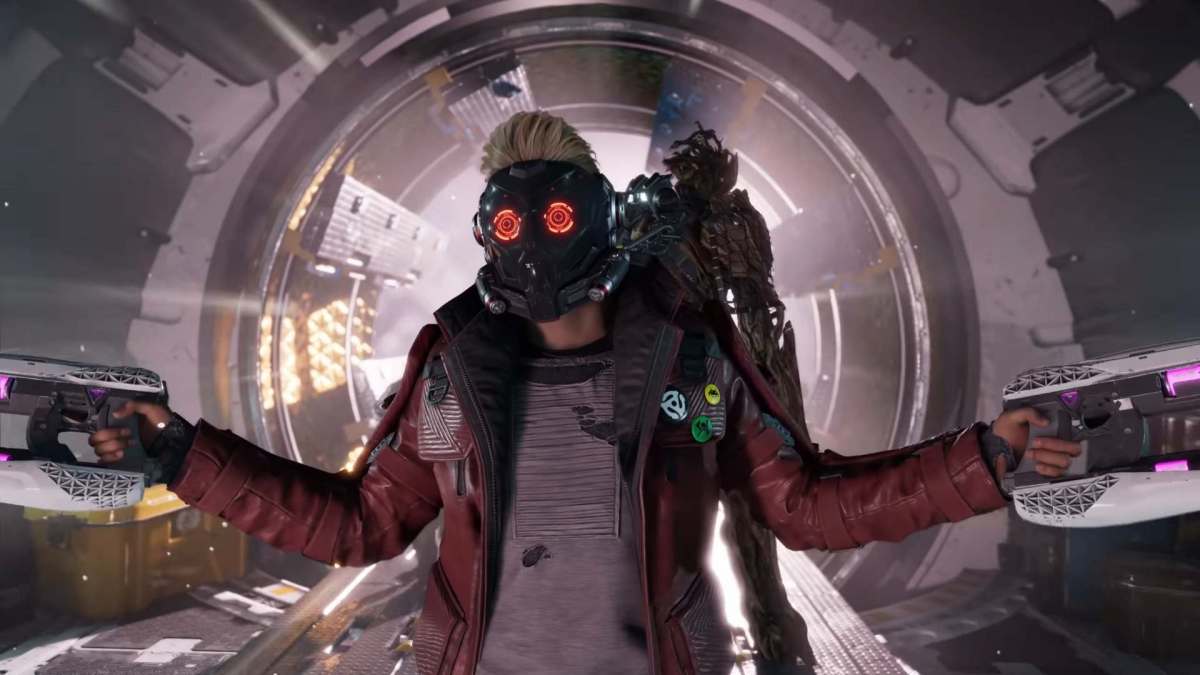 Marvel’s Guardians of the Galaxy definitely has a chip on its shoulder when it releases next month. Not only does it have to live up to the performances and reputation of its MCU movie counterpart, but it also must bear the weight of the struggles that came alongside developer Eidos Montreal’s recent Marvel’s Avengers game.

Thankfully, unlike Marvel’s Avengers, Marvel’s Guardians of the Galaxy is a single-player-focused title. That means that instead of pushing a Game as a Service experience, there is much more time put into crafting a unique narrative and atmosphere to go alongside the chaotic gameplay.

At least, that is how it felt during the roughly hour and a half playtime I had with the game recently. As it is about four hours into Marvel’s Guardians of the Galaxy, this preview build actually starts out pretty slow.

At this point in the story, The Guardians have arrived at a Nova Corps ship in order to pay a massive fine that was given to them early in the game.

The goal of this section is to speak with someone from Nova Corps, pay their fine, and send them on their way.

Before any of that could even happen, though, I found myself sucked in by the starting hub area of the game, the Guardian’s ship, The Milano.

Anyone who has seen the movies knows just how awesome this ship is, as it boasts plenty of cool rooms and living spaces that really make it feel like home, something that is clear while exploring it in the game. According to Eidos-Montreal creative director Steven Gallagher, that homely feeling is intentional.

In the Q&A section of the preview, Gallagher states, “The player will have opportunities to take as much time as you want or as little time as you want to really explore the Milano and explore different stories with your Guardians.”

I found this rung true even before hearing his quote, as I spent about 30 minutes talking to teammates and exploring the unique items in their quarters. Whether it was the ring in Gamora’s room or the pen Groot created for a troublesome purple Llama in the cargo hold, just about everything on the Milano came with an interesting story that was picked up along the way.

While this might seem like a minor addition to some, this focus on building the world and characters of Marvel’s Guardians of the Galaxy really got me in the mood for the action that was to come. Even four hours into the game, I felt like a true Guardian.

A little while after exiting the Milano and exploring the Nova Corps ship, it is revealed that something weird is going on. Not only is there an unguarded prisoner – whom I may or may not have accidentally spaced by pressing the wrong button – but pretty much the entire ship was empty.

When I was given the opportunity to interact with a member of the Nova Corps via a helmet transmission, I decided something was fishy with the whole situation and chose the option of not speaking. As it turns out, doing so was the right call, as a second playthrough revealed that this choice actually mattered.

Since I chose not to speak the first time around, I was able to see the Nova Corps members killing their own people, allowing me to get the drop on them. Choosing the other option means that they come to you, taking away the element of surprise.

Either way, you do end up engaging with them, with results in some pretty insane, fast-paced combat, regardless of the difficulty you choose. While I was mainly controlling Peter Quill, aka Star-Lord, firing his dual-wielding guns, freezing enemies, and boosting around, the combat of Marvel’s Guardians of the Galaxy is considerably nuanced.

As the leader of the Guardians, it is Quill’s job to get them to work as a team. This means directing them on who to attack using special moves, motivating them by making the right call when you huddle up, and reviving them when they are down.

While this may not sound too complicated at first glance, Marvel’s Guardians of the Galaxy requires you to factor in enemy types and situations when it comes to directing your teammates. While Gamora may deal the most damage, some enemies require Groot’s binding abilities to either open them up to attacks or give you room to breathe.

There are a lot of moving parts to the game’s combat that really do require you to pay attention to what is going on. If you don’t, it is pretty easy to find yourself with a game over.

While a few game-overs certainly happened to me during the preview, I eventually got the hang of commanding everyone and managed to get us back to the ship. It was here that Quill, Drax, Groot, and Gamora had to take care of enemies and help Rocket free the ship.

Though this may sound like just another task of clearing out an area to some, I loved this fight, as Rocket threw on some tunes over the Milano’s loudspeakers to result in an amazing end to the preview.

Overall, I was pleasantly surprised by the preview I played for Marvel’s Guardians of the Galaxy. In under two hours, the game managed to make me feel like a Guardian and a leader while also letting me fight with some dope music to help get me in the mood.

Anyone on the fence about Marvel’s Guardians of the Galaxy should give it a shot when it comes out on Oct. 26, as it looks like it will be one wild ride.