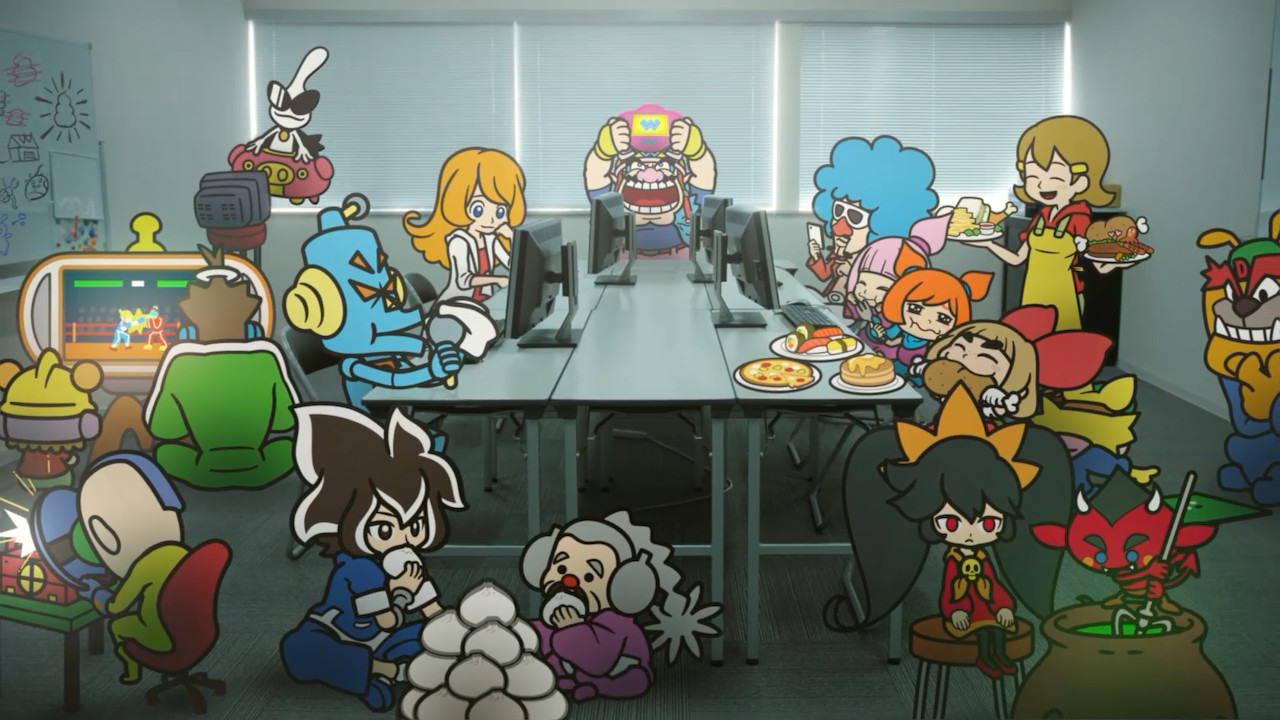 It was a bit of an unexpected but quite welcome surprise for Nintendo to drop a demo for WarioWare: Get It Together! on the Switch eShop last night. The demo provides a small but ultimately satisfying taste into what to expect from the latest in the WarioWare series.

Upon opening it up, I was greeted by a gorgeously crafted cutscene where Wario triumphantly announcing the completion of his latest game. When the rest of the WarioWare Inc. crew gather around to see the game in action, Wario is befuddled by it not functioning. The handheld he holds soon reveals a creepy pair of smiling lips on its screen, quickly transporting the entire cast into its game world. Thus, the micro-game mayhem begins!

For those unfamiliar with the WarioWare series, it involves playing insanely quick mini-games that last on average about five seconds each. Each micro-game has a goal that you’re tasked with completing before time runs out. It’s also important to note that these games are unabashedly silly in all the right ways.

For instance, some of the micro-games in WarioWare: Get It Together! include quickly needing to tweeze the hairs from a statue’s armpits, keeping a ball in the air without it touching the ground, or shooing a series of flies away from a birthday cake off the screen, to name just a few.

The other objective of WarioWare games is to play through as many of these micro-games in a row until you lose all of your lives. You lose a life each time you fail a micro-game’s goal. Lose four lives, and it’s game over, with the game recording your session’s high score.

Of course, there’s a catch with playing through so many micro-games in rapid succession, one after the other. As you play through more and more micro-games, the games speed up, offering less time to complete each game’s goal, as well as making the goals harder to complete.

In later versions of the micro-games, you’ll have to contend with more difficult challenges, like keeping an oblong shape in the air that is by no means easy to handle. Worse yet, you might have to deal with two balls at once for one heck of a juggling act.

WarioWare: Get It Together! separates itself from the rest of the franchise, avoiding being a derivative entry in the series by having you control different characters within each micro-game. Each character, a member of the WarioWare Inc. crew, has a unique utility to them.

The big man in charge himself, Wario, sports a jetpack that lets him fly around freely and performs a charge attack. Meanwhile, Cricket is a character who can’t fly but can make high jumps into the air. Each new character you get introduced to has you play a quick and helpful tutorial level, showing off their simple controls and enjoyable abilities.

As you can imagine, some characters are more suited for specific micro-games than others. Mona’s ability to have the player control the direction and spin of her boomerang makes the micro-game where you need to spin a windmill’s blades quite easy. Alternatively, a micro-game where Mona must stay out of the path of lasers is more difficult due to her always being on the move, never being able to stay in one place.

The demo contains about 10-15 micro-games of a promised batch for the final version of the game of 200 total. In the demo, you simply play through as many micro-games as you can before you lose all of your lives. The demo can be played with three characters on your team or an option to choose all six demo characters (the final version of the game will offer many, many more). Each option has its own high score leaderboard.

There is also a two-player mode on offer in the demo that I was able to play locally. You might think having two players working on the same goals would be easier, but in the case of my co-op partner and I, we learned that communication, while key, isn’t something that comes easy, especially as things get more difficult in later levels. Understandably, we also learned that panic takes precedence over communication when you only have five seconds to complete a given micro-game.

When Nintendo originally announced WarioWare: Get It Together during its E3 Direct showcase this past June, I didn’t find myself too excited. However, after playing the demo, seeing the substantial changes made to the formula, and enjoying the heck out of my time with the game thus far has turned me from “I’ll wait and see” to “I must play the final version!” Then again, that was probably the reason the demo was released in the first place, to get folks like me off the fence.

WarioWare: Get It Together! launches on the Nintendo Switch on Sept. 10, 2021.