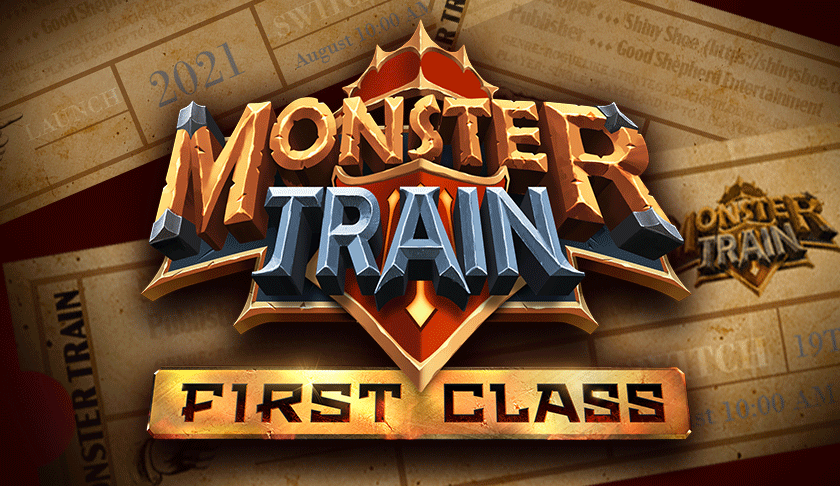 Monster Train is a deck-building rogue-lite game that was originally released on PC last year but has since made its way to the Nintendo Switch. Dubbed Monster Train: First Class, the Switch version comes with The Last Divinity DLC, which adds a new boss, clan, and several other variables that help mix up your runs. Being able to take a strategic deck-building rogue-lite game with you on the Switch sounds like a recipe for success, and yeah, Monster Train totally fits the bill.

While I was initially tempted to dismiss it as a Slay the Spire clone –why play any other deck-building rogue-lite when you already have Slay the Spire?– Monster Train: First Class quickly made me eat my words by introducing two core mechanics that separate it from Mega Crit’s excellent game.

Instead of playing as a single character with established perks and drawbacks, you get to pick cards from various different Clans in the game. You’ll pick one Clan to start with at the beginning of each run, but you’ll be able to build your deck with cards from the other Clans to help round everything out. Different Clans specialize in different areas; the Hellhorne Clan is much more focused on damage output, while Awoken cards are more oriented towards defense. The new Wurmik Clan includes a new currency for players to experiment with, and helps to augment cards, so it’s up to you to figure out the best synergies within a deck.

The second core mechanic that helps Monster Train stand out is the battle arena itself.

Your objective is to stop the angels from invading your train and getting to the top carriage to destroy your Pyre. The carriage is made up of three different levels, with enemies entering from the bottom level at each turn. If they survive that turn, they get to progress to the next level, so you’ll want to take them out as quickly as possible to prevent them from reaching your Pyre.

This adds a layer of strategy to Monster Train that requires you to think through your own unit placement carefully. It might seem like a good idea to place all your good cards on the bottom level, but will that be enough to take out all the enemies on the first turn? Are you confident enough that you can afford to leave the other levels defenseless for now?

Then there are the boss fights, which feel so exciting and exhilarating during your first few runs. Each boss comes with a unique mechanic that makes them feel utterly terrifying; special shoutout to a particular early game boss that has the ability to cycle through all the different levels of the train, and cannot be harmed until you’ve eliminated all other enemies on that level.

And of course, with each run, you’re consistently improving your relations with whichever Clan you’ve aligned with, and you’re steadily unlocking new and more powerful cards that can strengthen your deck for the next run. Battles can go by quickly, which makes Monster Train: First Class a great fit for the Switch. It’s easy to just jump into the game for a quick battle during your commute, put the Switch to sleep, then pick it up again when you have 15 minutes to spare.

It seems a bit too obvious and maybe even a little tiresome to say, but Monster Train truly does excel as a handheld game you can bring with you on the go. While it’s certainly easy to sink hours and hours into it in one sitting, it’s also just as satisfying to know that you can keep tweaking your deck and powering through battles while on the go or whenever you have time for it.

Monster Train: First Class feels great to play on the Switch, and with this and Slay the Spire (and Loop Hero looming in the distance), the Switch has further cemented itself as my favorite system to play these quick rogue-lites on.