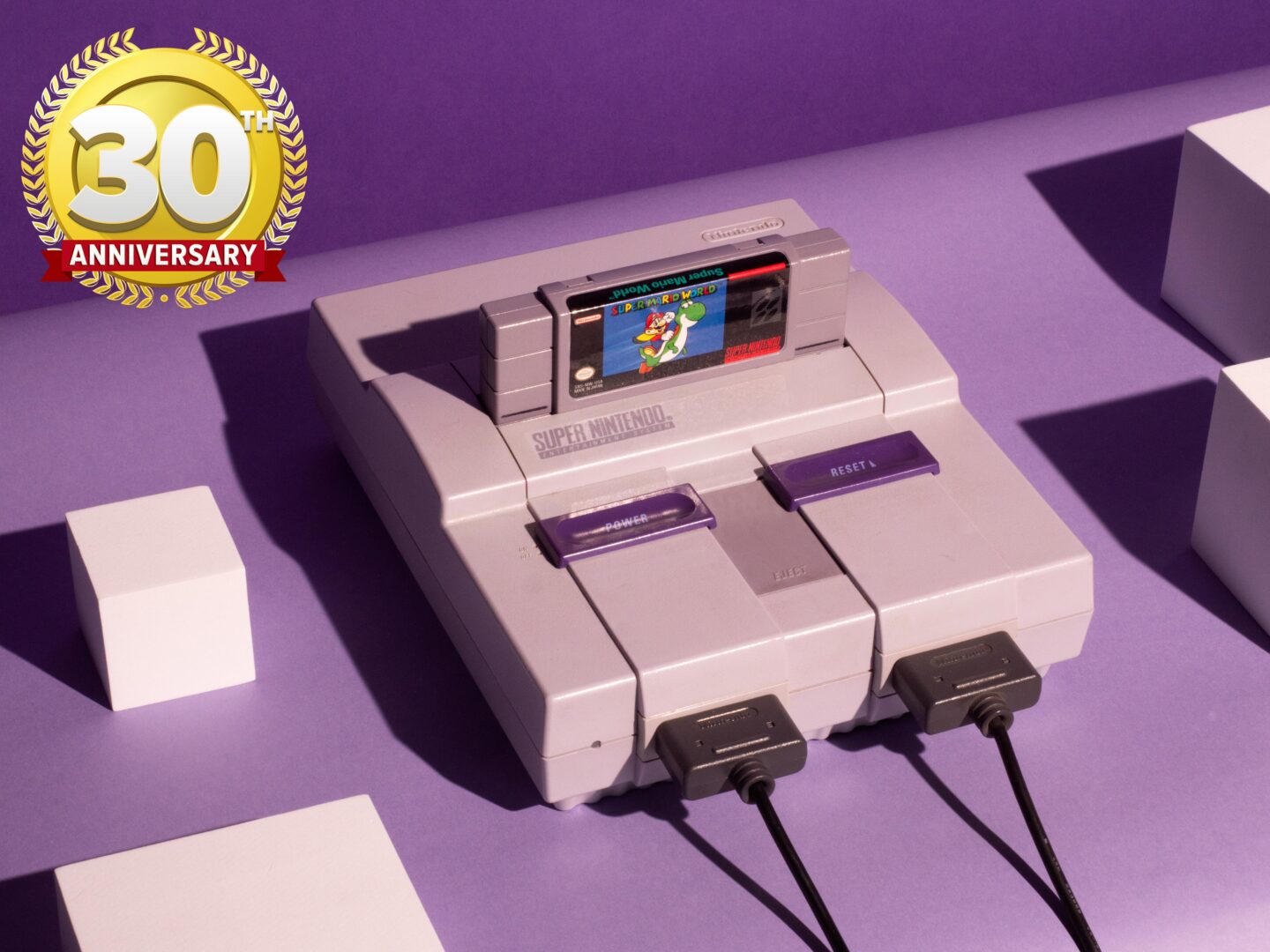 Yesterday marked the 30th anniversary of the Super Nintendo’s launch in North America. It was on Aug. 23, 1991 that the 16-bit wonder, AKA the SNES, took the continent by storm with an exciting series of launch games new and existing franchises including Super Mario World, F-Zero, Pilotwings, Gradius III, and last but not least, SimCity. The rest, as they say, is history.

The Super Nintendo saw a pantheon of amazing games in its 5+ years as Nintendo’s primary home console. Old standbys like the aforementioned Mario, as well as series like The Legend of Zelda, Final Fantasy, Dragon Quest, Kirby, Metroid, and more saw stellar new entries.

Additionally, the SNES saw the debut of plenty of new franchises, many of which stand strong (relatively speaking) to this day. We have compiled a list of seven such franchises that saw their humble beginnings and starts on the Super Nintendo.

One of the first and arguably best spin-offs featuring Mario and the rest of the Mushroom Kingdom gang started on the Super Nintendo. Nowadays the Mario Kart series has seen itself releasing on pretty much every major Nintendo platform, and has also experienced massive sales success. Seriously, Mario Kart 8 Deluxe still burns rubber on sales charts around the world, and that was a launch window title for the Switch!

Before the series saw itself with features like kart customization and anti-gravity sections, the series simply began with Super Mario Kart, launching just over a year after the Super Nintendo’s original North American launch. Super Mario Kart was a racing game like never seen before with a collection of eight Mushroom Kingdom characters to get behind the steering wheel with, items to use in races, exciting tracks such as Mario Circuit, Bowser’s Castle, and Rainbow Road, as well as two-player split-screen racing.

A major selling point was racing not only with (or against) a friend or family member, but also duking it out with them in the massively enjoyable Battle Mode. This mode would be seen in every future mainline Mario Kart game in some form or another.

While looking rather crude-looking nowadays, the use of Mode 7 graphics to produce a 3D-like appearance to races and tracks was a gamechanger and something insanely impressive back in 1992. Super Mario Kart was a stellar debut for a franchise that has only gotten better and more enjoyable since with recent titles like the aforementioned Mario Kart 8 Deluxe and Mario Kart Tour on mobile devices.

Whereas Super Mario Kart was a more beginner-friendly racer in both difficulty and appearance, SNES launch title F-Zero was decidedly less so, focusing on intense speeds, as well as more intricate, serpentine, and challenging, high-speed circuits.

A technical juggernaut at launch, F-Zero was the first game on the SNES to incorporate Mode 7 graphics, offering a quasi-3D approach to its visuals, making players feel like they were racing in a three-dimensional space. Of course, one couldn’t let the smooth and silky visuals distract them for too long, as there were races to win and ships to hopefully not crash, immediately costing a player a continue.

F-Zero not only debuted as a franchise on the SNES, but it also laid the foundation of the futuristic racing game sub-genre. Future titles like F-Zero X on the Nintendo 64 would add full-fledged 3D to the series, while F-Zero GX on the GameCube would be more of an evolution to the series, sporting breathtaking visuals on top of insane speeds.

In modern times, F-Zero is a franchise that Nintendo has on hiatus, apparently waiting for the perfect innovation for it to be deemed suitable to return. Meanwhile, F-Zero fans like us are simply kept waiting in general for the series to finally return to prominence.

A spin-off of the Donkey Kong series (which also celebrated a special anniversary this year), 1994’s Donkey Kong Country was developed by Rareware, the folks previously behind games like Battletoads, Jetpac, and Sabre Wulf.

Rareware used pre-rendered graphics to great effect, making the characters of Donkey Kong Country look 3D, as well as providing gorgeous, jaw-dropping 2D environments to run, jump, and roll around in. David Wise’s glorious soundtrack accentuated the platforming action splendidly, ambient during some levels and being absolute bops during others.

Fortunately, there was more to the game than just its attractive visual style, as the gameplay was downright excellently executed as well. Playing as both Donkey Kong and Diddy Kong felt great with the former feeling like he had a proper amount of heft to him while Diddy felt light on his feet. This would affect gameplay as well. DK could easily take out larger Kremlings while Diddy Kong would simply bounce off of them, unable to defeat them.

Since Microsoft’s purchase of Rare, the more than capable Retro Studios of Metroid Prime fame (including the upcoming Metroid Prime 4) has crafted two more games in the series, picking up where Rare left off: Donkey Kong Country Returns on Wii and 3DS, and Donkey Kong Country: Tropical Freeze for Wii U and Switch. While there’s been another extended absence of a new DKC game since, it’s lovely that the quality of the series between developers did not diminish.

Releasing in North America in 1995 as a numbered sequel to Super Mario World, Yoshi’s Island served as a dramatic departure to the main Mario platformers seen prior to the game. For one, it starred Yoshi and had an infant Mario in a supporting role, along for a literal ride to help rescue Baby Luigi from the clutches of Baby Bowser and Kamek.

Levels were much more about exploration than in mainline Mario games. The objective was still similar: reach the goal, but this time around players could do plenty of optional exploring for collectables in the form of 20 red coins and five smiley flowers. This is all the while avoiding taking damage, as when this happened, Baby Mario would eject from Yoshi’s saddle, crying relentlessly until saved. If the countdown to rescue him reached zero, Kamek’s forces would nab Baby Mario, and the player would lose a life.

Like Wario Land: Super Mario Land 3 (which would be a vehicle for Wario to star in his own series without the SML branding), with Super Mario World 2: Yoshi’s Island, the Yoshi series would take on a personality and identity of its own. Yoshi would see himself star in a multitude of new entries of varying qualities with and without Baby Mario, such as Yoshi’s Island DS, New Yoshi’s Island, and Yoshi’s Island games in all but name, Yoshi’s Woolly World and Yoshi’s Crafted World.

Another 16-bit platforming franchise that spawned off another, Mega Man X was a more serious, no-nonsense action-platformer that was a spin-off of none other than the Mega Man games from the NES. The series took a bold new direction for Mega Man’s debut on the Super Nintendo, offering intense action, new moves to make X a much more mobile and capable robot (or Reploid in this case), and a darker story.

Mega Man X saw multiple changes to the standard Mega Man formula. For one, players could return to past stages to nab missing collectables like health-increasing Heart Tanks, health-restoring Energy Tanks, and discover move-enabling capsules left behind by Dr. Light. Not only were these helpful in battle in a pinch, but also a great way to expand the longevity and replay value of the game for completionists.

X also featured Mavericks to battle instead of Robot Masters. Instead of humanoid bosses like Elec Man or Top Man, X generally battled animal-themed bosses like Launch Octopus and Storm Eagle, for example.

The Mega Man X series would see three games released on the SNES, and like the Donkey Kong Country series, each one would release pretty much on an annual basis. The series would switch over primarily to the PlayStation from X4 onwards. X7 would experiment (decidedly poorly) with full 3D gameplay, while Mega Man X8 returned to a more 2.5D focus. While Mega Man X as a series isn’t one that is as consistent as the classic Mega Man games, its highs are some of the best in Mega Man series history.

Another series that debuted on the Super Nintendo is one that no doubt was inspired by rivals Final Fantasy and Dragon Quest, then produced and developed by Squaresoft and Enix respectively. It only made sense for Capcom to enter the RPG arena with a series of its own.

Enter Breath of Fire. The original game was coincidentally enough published by Squaresoft. Future entries would be taken care of solely by Capcom. While the original Breath of Fire was a simplistic, basic RPG, it did resonate with plenty of players with its engaging world, presentation, story, characters, and battles which featured hero Ryu’s ability to transform into one of many dragons.

Breath of Fire II would follow Ryu’s exploits against a corrupt church, while laying the foundation for future installments which would leave Nintendo and release on PlayStation consoles. Breath of Fire III and IV sported 3D environments with impressive and stunning sprites, making for a marvelous mix and visual package.

Since the last Breath of Fire game that released on a home console, Breath of Fire: Dragon Quarter for the PlayStation 2 in 2003, the Breath of Fire series has pretty much been on an indefinite hiatus. Capcom attempted to bring the series back with an ill-fated, Japanese-only mobile game, even titling it Breath of Fire 6, but it failed to generate much interest or financial success. For now, the series is one that is currently and unfortunately on Capcom’s backburner.