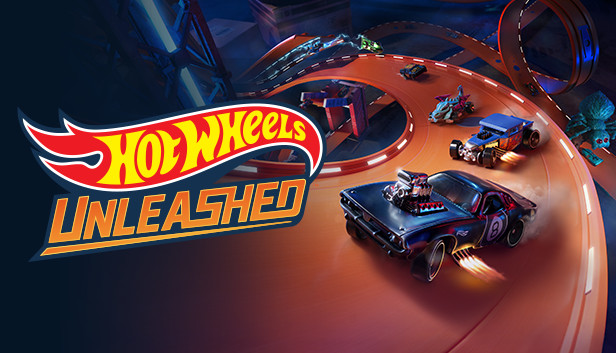 I’m not exactly the most hardcore racing fan around, but even I couldn’t resist when I was offered the opportunity to check out a preview build of Hot Wheels Unleashed on Steam. While I’ve never had the fortune of owning my own Hot Wheels cars as a kid, I always found myself drawn to just how cool and blocky they looked. They were the coolest racing toy cars around, and Hot Wheels Unleashed brings that toy-like charm to life in video game form.

The preview build only featured a limited number of tracks and cars to play around with, but it was more than enough to give a good taste of the game. The environments are extremely varied even from this limited selection, ranging from college campuses to skate parks and skyscrapers. The bubblegum colored tracks wrap around them beautifully, creating a very childish-looking yet simultaneously charming-looking environment for the races.

It certainly helps that your race cars are literally Hot Wheels toy cars. They’re absolutely tiny compared to the objects around them, which just adds to the lovely toy-like nature of the game.

As an arcade racer, the various cars in Hot Wheels Unleashed felt good to control. Of course, each car comes with varying braking speeds and handling stats, but the arcadey feel of the game makes it a total blast to play. It almost reminded me of something like Rocket League in a way, especially when you drive off platforms and go bouncing up into the air.

You have to be delicate with how you control the car, as one wrong move can easily cause you to spin out of control and land on the wrong side of the track. And yeah, if that happens, you’ve pretty much lost the entire race. Even with the AI difficulty set to medium, I still felt like I really had to concentrate to stand a chance of winning the race.

That’s an aspect of the game that can feel frustrating to newcomers who just want a couple of wins under their belt, but despite that, it was still a blast to watch your tiny car flip through the air as you completely lose control of your car and, subsequently, your entire life.

Your boost meter fills up insanely quickly, and with just a tap of a button, you can send your little car speeding through the tracks at breakneck speed. This also causes you to lose control of the car very easily, so it’s best used on straight paths and not on a track filled with curves and twists.

The tracks themselves are also filled with boost pads so there are plenty of opportunities to drive at a much faster speed, making this game a pretty frenetic and fast-paced arcade racer. The Rocket League-esque bounciness and the high nitro speeds can severely impact your car’s handling in a very negative way, and considering that most of the cars don’t really have high handling to begin with, this can be a bit of an annoyance.

This is just a preview build, though, so I expect there’ll be more vehicles to choose from in the final release, with more varied stats.

I came away from Hot Wheels Unleashed feeling pretty psyched, despite not being all that experienced in the racing genre. The imagery of tiny diecast cars zooming around beautiful varied backgrounds brings a smile to my face, and I can see this one being a great party game to play with friends once it’s out.