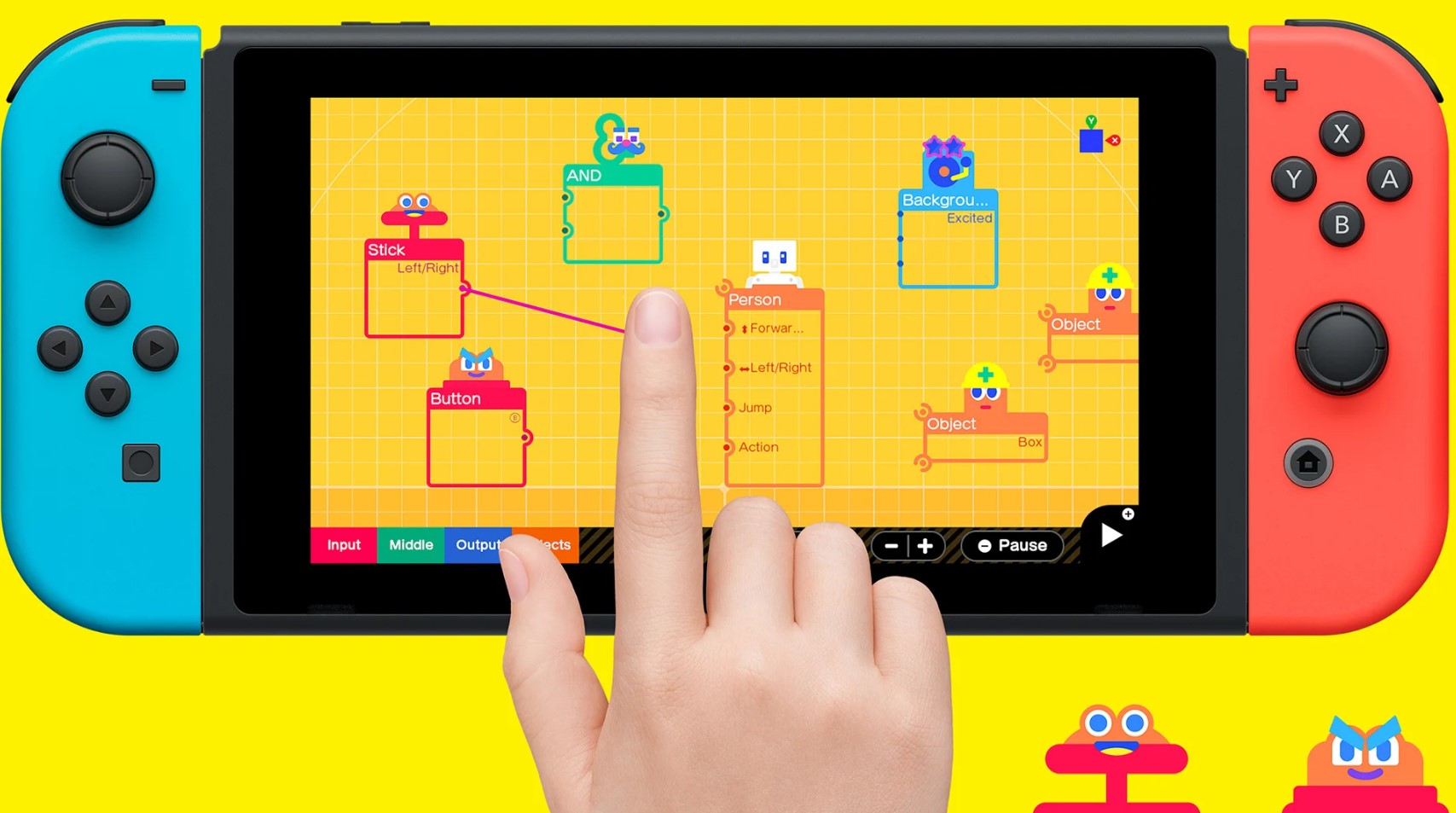 When it comes to game design, few come close to the folks over at Nintendo. Throughout the years, the Japanese gaming giant has given us plenty of awesome experiences, and have influenced even more game designers looking to make their mark on the industry. With Game Builder Garage, the gates are opened even wider, as Nintendo unleashes a potent and accessible video game development software on the Nintendo Switch.

This is not exactly the first time that Nintendo has allowed players to go wild with their own creations. The likes of Super Mario Maker, its sequel, and the Nintendo Labo VR Kit offered varying tastes of game development. However, they all pale in comparison when stacked up against the capabilities of Game Builder Garage.

Instead of keeping creators in a lane that is restricted by genre, Game Builder Garage gives players the keys to a world full of possibilities. Do you want to make platformers? You most certainly can. Perhaps a shooter or even a puzzle game is more your wheelhouse, that can be done as well. Whatever game type you can think of, it is highly likely that you can make it possible in this environment. The only caveat is that you have to figure out the logic to make everything work in unison to make your vision come alive.

Of course, being on the Nintendo Switch, creations will all be able to take advantage of the different functions on the console. Touchscreen controls, motion controls, and even the IR camera can be utilized to enhance your work. Perhaps more importantly, just like all of the other game editors, you will not be presented with something that is rough on the eyes or even in function. Nintendo is still keen to put a stamp of quality on everything, even if it is your own crazy venture using Game Builder Garage.

To help creators on their way, Nintendo has chosen to present the programing in Game Builder Garage in a visual manner that is more easily understood. Instead of letters and numbers, you will be using the Nodon, creatures that take the place of code. To create objects or to establish a logic chain, you just need to add the appropriate Nodon. Soon, you will be putting together complicated strings of Nodon before you know it.

Made for All Ages

From an accessibility point of view, this allows Game Builder Garage to be more than just for the enthusiast. As long as you have spent some time learning the ropes, chances are, you will be able to create something of your own. The tutorials available are some of the best around, guiding players through the journey of learning programing and coding through the Nodons.

The seven interactive tutorials are necessarily stuffed with content, with each running for about an hour or so. It might be too long for some, but it is absolutely necessary to allow players to harness the capabilities of the software. Step by step, you will be eased into more complex creations, going from adding and linking objects, all the way to creating 3D spaces that require camera work or even setting off a chain of events.

Just to make sure your skills are up to snuff, Game Builder Garage has also placed certain assessments between the tutorials. Consider it like a game development pop quiz, where you can put your newly learned knowledge to the test. These are not just boring tests either, Nintendo is challenging your understanding of the language and logic with fun challenges that make learning an enjoyable affair.

Once you have solidified your foundations, you can jump right into free programming mode to let your creativity run wild. As someone who much rather enjoy the creations of others than to do it myself, it was still fun to be able to put together a racing game in less than an hour. There is no doubt about the potential that lies here, especially when coupled with the power Nintendo is placing in creators’ hands. It definitely won’t be too long before we see some amazing creations take the world by storm, all made possible by Game Builder Garage.

Unfortunately, for all its merits and amazing features, Game Builder Garage is not immune to certain issues. For one, creating elaborate experiences will likely test your patience. Sure, you can make things easier by plugging in a USB mouse to help with editing, but the workspace is not exactly expansive. Things can get messy and cluttered in no time. While the Nodons are an excellent avenue of visual learning, perhaps a text-based alternative could be provided in due time.

The online features of Game Builder Garage also take a knock thanks to Nintendo’s continued reticence in the space. If you want to play the creations of others, you must first be friends. Otherwise, you are marooned on your own island of creativity. To make things even worse, there is no community or a hub that allows Game Builder Garage players to seek each other out. Restricting you to just creations of friends is bad enough, but to not bring players together in celebration of original creations just does not make sense.

As a first step into game development, Game Builder Garage represents a fun and engaging way of dipping your toes. It is not overly convoluted, and is approachable when it comes to creating polished experiences with a little bit of work. The software educates, guides, and makes the creator’s enjoyment a key part of the process. If only Nintendo would fix the online and community gaps, then it will truly be a playground of creativity.