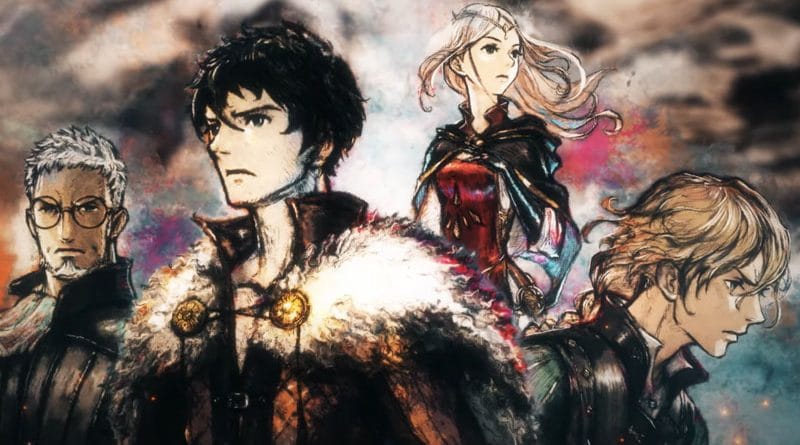 Given the success and critical acclaim of Octopath Traveler, it was no surprise that Square Enix would eventually tease yet another 2D-HD style game that embodied the essence of the old-school JRPGs of yesteryear. Despite some of its shortcomings, Octopath Traveler was lauded for its beautiful graphics and nostalgic pixel art. If Octopath was a homage to Final Fantasy VI, then it’s clear that Project Triangle Strategy is meant to be a nostalgic throwback to Final Fantasy Tactics.

Clumsy title aside, Project Triangle Strategy is pretty much a spiritual successor to the original FF Tactics. Right from the get-go, the world is filled with political strife and tension, and the debut demo now available on the Switch wastes no time in kicking things off with a treasonous betrayal and an exciting escape from a medieval castle.

Graphically, it’s just as gorgeous as you’d expect. The pixel art sprites are cute, detailed, and well-animated, and the backdrops are similarly beautiful. Just like Octopath Traveler, Triangle Strategy also features a thin layer of fog spread across its backdrop if you look carefully, and it’s what lends the game its wistful, nostalgic vibe.

And gameplay-wise, it’s nearly identical to FF Tactics, but heavily modernized for a new audience. Careful positioning is key here, just like in any SRPG, though you have to be aware of which direction your characters are facing as they can take critical damage when struck from the back. Level height differences matter as some abilities can only be executed from higher ground, and in some cases, attacking from up high can also deal more damage.

While the UI does initially appear rather cluttered at first glance, all the important information you need is laid out in front of you, and after a few minutes in my first battle, I started to find it to be quite intuitive as well.

And once you’ve taken all your actions and you’re ready to end your turn, you choose the direction you want your character to face, and you’re all set.

Decisions are final, however, and if you’re just coming off the recent Fire Emblem: Three Houses, adjusting to Triangle Strategy might take some getting used to as there’s no way to undo an action if you’ve accidentally pressed the wrong button.

Thankfully, movement grids are properly laid out in front of you, with purple colored tiles indicating the danger zone where your character could potentially be attacked if you move them there.

The classes you start off with are basic enough: you have a mounted knight, a soldier, a support mage who buffs, a healer, two mages, an archer, a tank, and a spy and scout. The last two classes take a little while for you to warm to, but I quickly found myself becoming quite fond of the spy.

Armed with an ability to go invisible for two turns, the spy can easily sneak up on enemies and hit them with a slumbering strike that has a chance of putting them to sleep. The rest of your troops would then be able to advance and take them out without much resistance.

There’s plenty of depth to the mages as well, with them being able to cast ice and fire spells to set the ground ablaze or freeze it. Thankfully, your units won’t be damaged by friendly fire, and I expect there will be more terrain effects to be aware of in the full game.

New to Project Triangle Strategy are ability points, which take the place of mana and MP. Whereas most RPGs would require you to expend some sort of resource to cast a spell, Triangle Strategy makes use of ability points instead, indicated by a small yellow diamond next to your character’s name, not dissimilar to Octopath Traveler’s own Boost Points.

You rack up points quickly if you get through your turns without using any abilities, which is certainly a wise move, as the higher tier abilities will require more points. For instance, a single-target heal would cost you one point, while an AoE heal around your caster would cost two points.

It becomes a mini risk vs. reward system, not unlike what we’ve seen in Octopath Traveler and even Bravely Default, though the stakes in that game are much higher, and it provides a nice twist to the SRPG formula.

Outside of combat, the kinds of activities I could take part in within the demo were limited, but gave me a taste of what I could expect in the full game nonetheless.

There’s an encampment where you can stock up on healing items and other consumables, and there are also other areas to explore on the world map that can lead to more story cutscenes and potential side battles.

Perhaps the biggest point of intrigue with Triangle Strategy is its Scales of Conviction system. In between every major battle, it seems that your main cast of characters will gather as a council to deliberate over what to do next.

In the demo, we were forced to make the tough decision of whether to hand a prince over to the enemy to avoid devastating bloodshed, or to stand our ground to fight.

Most members were in favor of handing him over to protect the citizens, but it’s possible to wander around town for a bit to talk to your townspeople and gather information that might sway the council. With new info in hand, you can then try to persuade your fellow council members to see things your way.

Even as the player, though, you can only cast a single vote, and you will be beholden to whatever the majority decides and the story goes on from there. It’s easily the most interesting mechanic in Project Triangle Strategy, and I’m eager to see how players will be able to shape the story this way.

The fact of the matter is, as beloved as Final Fantasy Tactics was and still is, it’s just not an easy game to play in 2021. Outdated graphics and the clunky UI, along with the poorly explained tutorials, make the original Tactics a difficult game to recommend to new players, unless you’re truly invested in the world of Ivalice or the Final Fantasy series as a whole. And we mean truly invested.

Project Triangle Strategy, then, is the game that SRPG fans have been waiting for. While the Fire Emblem series has certainly dominated the genre for a bit in recent years, those seeking the vibe and more rigid gameplay style of Tactics have been left wanting, until now.

I’ll certainly never go back Final Fantasy Tactics again, but the little updates and modernizations in Project Triangle Strategy already have me hooked.