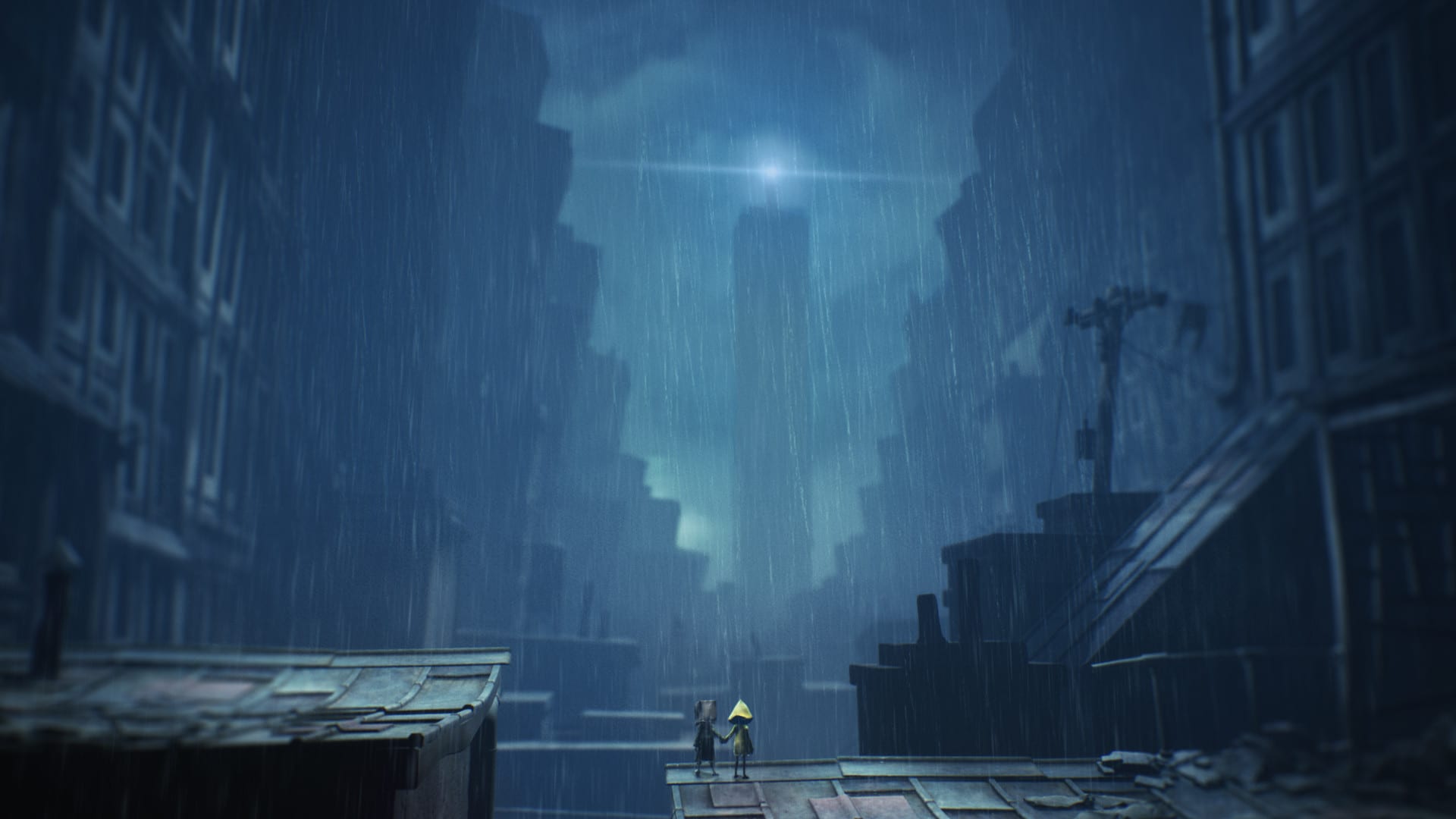 Ever since playing the preview back in November, Little Nightmares II has been one of my most highly anticipated games of 2021 –which is quite the accomplishment considering how much of a huge coward I am. There was just something about how the game structured its bite-sized gameplay and ambiance, as it somehow managed to evoke an odd combination of excitement and dread that left me craving more.

Litte Nightmares II begins shortly after the events of the original, though it contains a few key differences in regards to its stories, characters, and gameplay. One fundamental change is that players no longer control Six, the first installment’s protagonist –though she is in the game as a computer-controlled helper.

This time around, the story starts with Mono: a scrawny boy who hides his face with a light brown paper bag hat. Little is known about the boy’s past at first, though he seems caring enough when introduced, going out of his way to rescue Six when he finds her trapped in a basement.

While hesitant to join him at first, Six eventually warms up to Mono, resulting in the two joining hands and setting off to try and survive the harsh world Little Nightmares II throws at them. This journey sees them venture through an eerie setting, working together to solve puzzles and survive the multitude of different enemies strewn throughout the Pale City.

Just like in the first game, Little Nightmares II is at its best when you’re tasked with either hiding or running from the larger than life bosses that make up each section. Every single chase sequence had me on the edge of my seat, as they did a masterful job designing the levels so that the timing was pinpoint precise.

There were so many instances in the game where I thought I was going to get caught and die, only for Mono and Six to escape by the skin of their teeth and transition to a new section of the level. This tension carries on throughout pretty much the entire game, as I was always prepared to be ready to run or hide if necessary.

While a good part of this stress is due to how the gameplay is structured, the Pale City’s ambiance plays a massive role in the fear you’ll feel while playing, too. Whether it is the well-lit chaos of the school filled with tormented Wooden children, the pitch-black mannequin hospital, or the silhouettes of the cityscape, it is hard to ignore how terrifyingly beautiful Little Nightmares II’s setting is.

Even when it doesn’t play a part in the gameplay, the haunting scenery on display throughout each of the five chapters that make up the game is just an amazing backdrop. Despite my fears, I found myself stopping and taking in the sites –and snapping a ridiculous amount of screenshots– at least once a level. It’s hard not to appreciate the scope this massive world conveys compared to these tiny creatures, showing how truly scary it must be for them.

Another pretty big change to Little Nightmares II is found with the introduction of combat. Instead of just being able to run away and hide from your enemies, some sections allow Mono to fight back.

More often than not, combat is as simple as swinging the heavy weapon Mono carries to one-shot your enemies. Some instances do require a bit of timing and strategy, though, as you run into higher quantities and quality of enemies the further you progress in the game.

While it is a neat idea, overall the combat fell flat, as swinging the weapons felt far too weighty. Yes, that adds to the immersion of skinny Mono swinging a human-sized hammer, but that didn’t make the tedium of being slightly off when attacking feel any less annoying when it led to my death multiple times.

Thankfully combat doesn’t make up a big section of the gameplay outside of the chase sequences, so it doesn’t take away from the overall enjoyment.

On the other hand, puzzles in Little Nightmares II are even more brilliant this time around, revolving around everything from surveying your environment to performing physics-based tasks. Thanks to the ability to use Six for help, Mono is able to accomplish a lot more than she was able to do by herself in the first game.

The only thing that could possibly have made puzzles better would have been co-op. Getting to explore and solve the mysteries of Pale City with a friend could have been like a more terrifying version of Unravel 2.

With that said, Little Nightmares II is an amazing single-player experience. Everything that was great about the original is even better in this sequel.

Chase sequences and the overall ambiance are as bone-chilling and thrilling as ever, while puzzles are even more challenging and satisfying to complete thanks to the tragic duo of Mono and Six. Even if you aren’t a horror fan, I’d highly recommend you play Little Nightmares II, as it currently sits as my favorite game of 2021 so far.