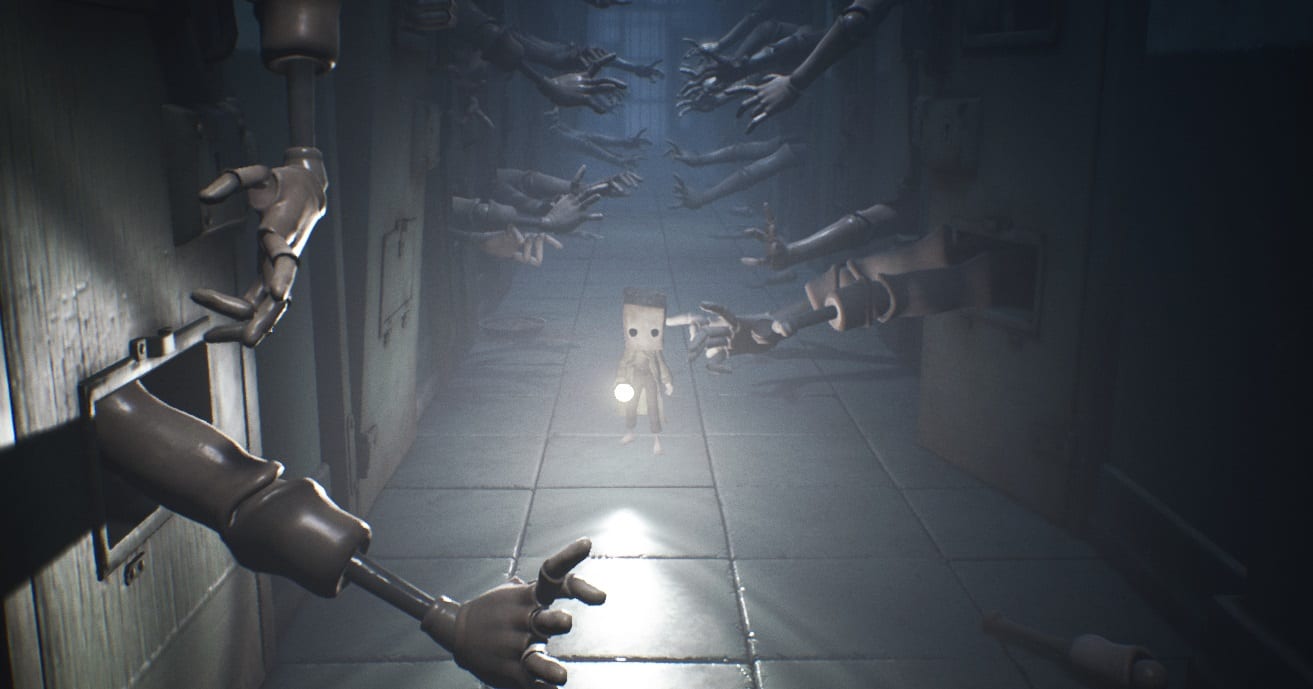 The easiest way to turn cute and compact into absolutely terrifying is to combine mannequins and an abandoned hospital. Twinfinite had the eerie pleasure of experiencing this while checking out an early demo of Little Nightmares II this week.

Just after the first game, Little Nightmares II sees the original protagonist, Six, escape from the Maw and meet up with a boy named Mono. Together, they must navigate a decaying city, filled to the brim with deformed, tv-addicted citizens, creepy mannequins, and so many more terrifying antagonists.

The demo starts by tasking the two characters to find batteries to activate an elevator that’ll help them progress the Pale City. While they’re both together, Mono is actually the only controllable character, at least in this section.

While she does help by boosting Mono over certain spots and grabbing items here and there, Six pretty much stands around sadly, waiting for you to find the battery and return.

While this is likely due to the leftover trauma Six feels after the first game, I hoped there would be a little more teamwork elements integrated into the puzzles than there were.

Instead, Mono must traverse to a few different rooms by himself, running from and battling creepy hands and light-hating mannequins while climbing and traversing through vents. You can definitely tell that the boy with the paper bag over his head is more aggressive than Six from the little bit the demo shows off.

Mono can pick up objects and swing them, adding more combat and another layer of puzzle solving to the game this time around. He also possesses a flashlight that he can turn on and off, serving to illuminate more than the lighter did in the first game, which helps out a lot with puzzles and navigation.

The hospital section, in particular, relied heavily on the flashlight, as the environment features mannequins that’ll one-hit-kill Mono if they aren’t illuminated by light. While it doesn’t reinvent the wheel, this mechanic created some frightening situations.

There is one area where Mono has to make it from one end of the room to another with about 10 mannequins chasing him. The hard part is that you don’t know which ones come to life until you get close to them.

Hopefully, Little Nightmares II doesn’t lean on the mechanic too much, as the movement is a little sensitive, especially when maneuvering Mono simultaneously. Even if it does, though, the timing and hair-raising ambiance Tarsier Studios has come up with yet again is definitely on-par with the first title.

There were at least three different instances of true shock in the demo alone that happened to me while playing. The game is more than jump scares, using its gameplay, setting, and situations to instill a feeling of genuine fear amidst its puzzle-solving elements.

If you loved the first installment, there is no doubt that Little Nightmares II is going to impress you as well. Be sure to keep an eye out for the upcoming puzzle-platformer horror adventure game when it releases on current and next-gen consoles and PC on Feb. 11, 2021.