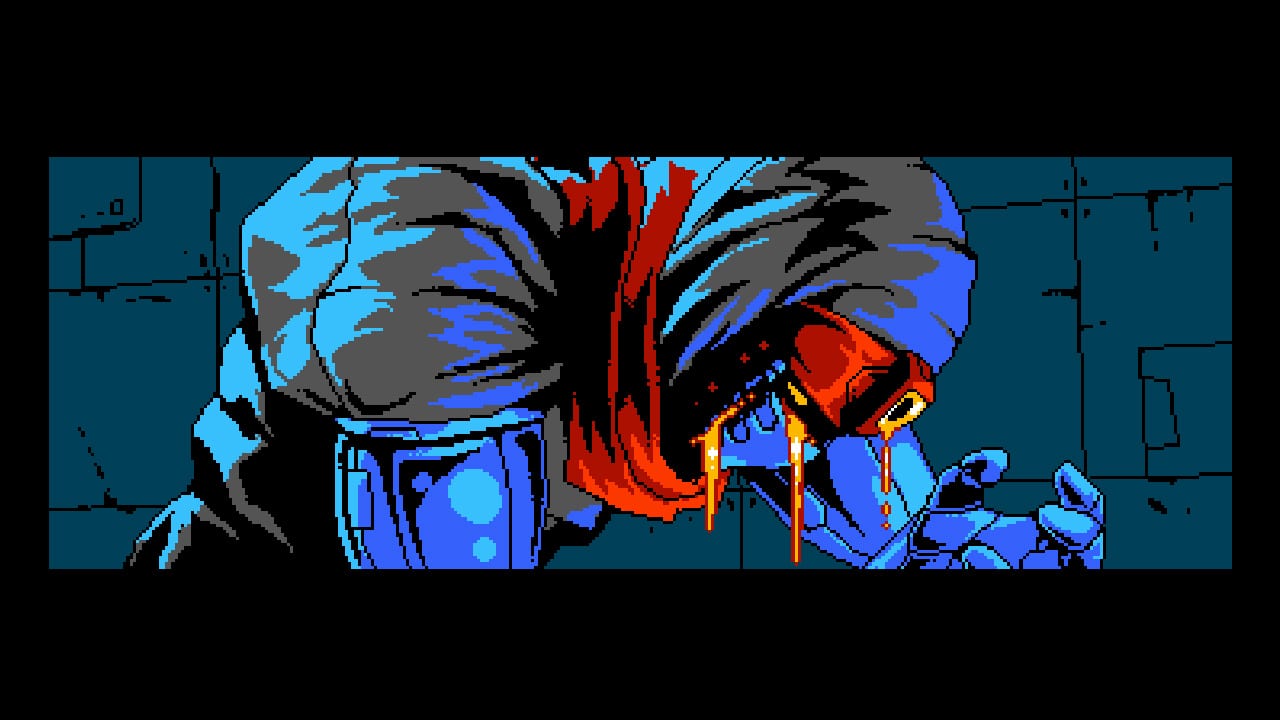 Author’s Note: We have edited an error in the review below that only mentioned Jake Kaufman as the composer of the game’s soundtrack. Enrique Martin is the composer and Jake Kaufman is the producer. We’re sorry to Martin and all involved and we regret that this error was published.

It’s extremely clear when a game developer is just trying to cash in on nostalgia. And there’s always a little bit of trepidation when a new game dev comes right out and mentions major classic games as an inspiration. Rest assured, Cyber Shadow charts a path all its own and never looks back.

However, that doesn’t necessarily mean that the trail it blazes is one without bumps, pits, or swerves. Considering the fact that developer Mechanical Head Studios is essentially just one person (Aarne Hunziker), it’s an impressive game that could have used a little more oversight.

Right from the start, you start to see signs that something is off in terms of the pacing. Cyber Shadow begins with a massive explosion presumably destroying the protagonist, Shadow. Your little robot buddy, L-Gion, wakes you up from stasis and you’re off on your vague quest to do something.

It’s not until a few stages and boss fights in that there’s suddenly a massive exposition dump that explains the events leading up to the explosion at the start and why you need to stop the antagonist, Dr. Progen.

There are some terminals to read and L-Gion drops in every once in a while in between. Otherwise, this one scene is where most of the story gets explained to you.

There are also a few flashbacks following the big story dump to give Shadow and his master a more solid backstory. But none of it goes deep enough to make you care about anyone involved.

On top of the odd pacing is a mostly bland story. The good guy runs through a bunch of trials to regain lost power and destroy the big baddie at the top of a tower. I will concede that the story is coherent and the writing isn’t bad by any means.

Still, nothing exceptionally interesting happened that kept me wanting to know what was going to happen next.

But the one bright spot of the story has to do with a former member of Shadow’s ninja clan known as Apparitor. He gives up everything that makes him human and aligns himself with the villainous Dr. Progen. As Shadow’s foil, this naturally makes Apparitor an interesting character.

Because of that, it becomes much easier to relate to Apparitor. Despite being corrupted by Dr. Progren, this former man is still exceptionally human in his devotion to his master.

Although the story is mostly forgetful, the gameplay — mainly the boss fights — will stick with me for a while. You start out with a simple slash attack and build on top of that foundation with eight different moves that use up your Spirit meter — Cyber Shadow’s equivalent to a magic meter.

Shurikens, a midair downward strike, a dash strike, and a rising slash that launches fireballs upwards are just the beginning of the fun.

There are also multiple extremely enjoyable items you can pick up throughout levels or at checkpoints. These power-ups can extend your range, give you a shield that doubles as a projectile, turn enemy projectiles into SP for your Spirit meter, and more.

And I would be remiss to not mention the aptly named Swag Blade. This large shuriken orbits Shadow and can even be launched into enemies by hitting it. Clearing screens of enemies with this item feels so good. But all of these items are balanced out by their ability to be destroyed if you get hit too many times.

And the checkpoints you can get these items from are a little game on their own. In order to get items from checkpoints, you need to drop some of the game’s currency into them. Each checkpoint has a single item it gives out, but it’s usually only a small cost of 20 to 50 to permanently unlock it at that specific location.

Speaking of bosses, these guys pack one heck of a punch. The checkpoint before a boss fight usually equips you with an item that will aid in the battle, but even then you’ll be in for a tough fight.

One of the most memorable boss fights pits you against a giant robot dragon named Mekadragon. Since the battle takes place over water, you need to knock enemies into the reservoir to act as platforms while dodging Mekadragon unexpectedly diving at you from all directions, not to mention its fire breath. And you can’t just take to swimming or you’ll eventually get fried when Mekadragon electrifies the water.

This goes for all bosses in the game as well as Mekadragon. Figuring out patterns, learning when to counterattack, and testing out what attack to use next is extremely rewarding. With such a large arsenal available, I can only assume I barely scratched the surface of what is possible in every boss fight. A boss rush mode would be a fantastic addition in a future update.

Besides bosses, there are also thuroughly difficult shrine challenges. There are a few shrines scattered throughout Cyber Shadow’s levels that each culminate in a battle or movement-based challenge. While not technically bosses, they’re just as rewarding to complete.

Unfortunately, I can’t say the same for the individual levels. Don’t get me wrong, there are small sections here and there that are absolutely brilliant with acrobatics that feel fantastic to pull off. But those are few and far between in what feels like a rush just to get to the more exciting boss fights.

It’s a shame because the bones for ridiculously fun and free movement are there. But most of the screens feel cramped and limiting. This also hinders the room for exploration. There are secrets to be discovered, but the cramped layout keeps you in a mindset of wanting to press on instead of exploring.

That’s truly unfortunate because this game has absolutely stunning art that you could be taking in while exploring. For a game that’s looking to emulate an 8-bit look, it’s extremely sharp. Every environment feels alive with the crisp enemy sprites inhabiting them.

And all the while, a rock-solid chiptune soundtrack composed by Enrique Martin and produced Shovel Knight’s composer, Jake Kaufman, sets the stage. Where the story lacks feel, the score more than makes up for it with tracks that exude emotion and get you in the mood to take on a giant robotic dragon.

All in all, Yacht Club Games‘ return to the role of publisher for other developer’s games is a bit of a mixed bag. Cyber Shadow delivers good action platforming, stunning art, great music, and incredible boss fights. Regrettably, the story, pacing, and exploration all drag it down.

In the end, the positives are strong enough to make Cyber Shadow a fun adventure for indie platformers fans, NES Ninja Gaiden fans, or even gamers who just like tons of challenging boss fights.