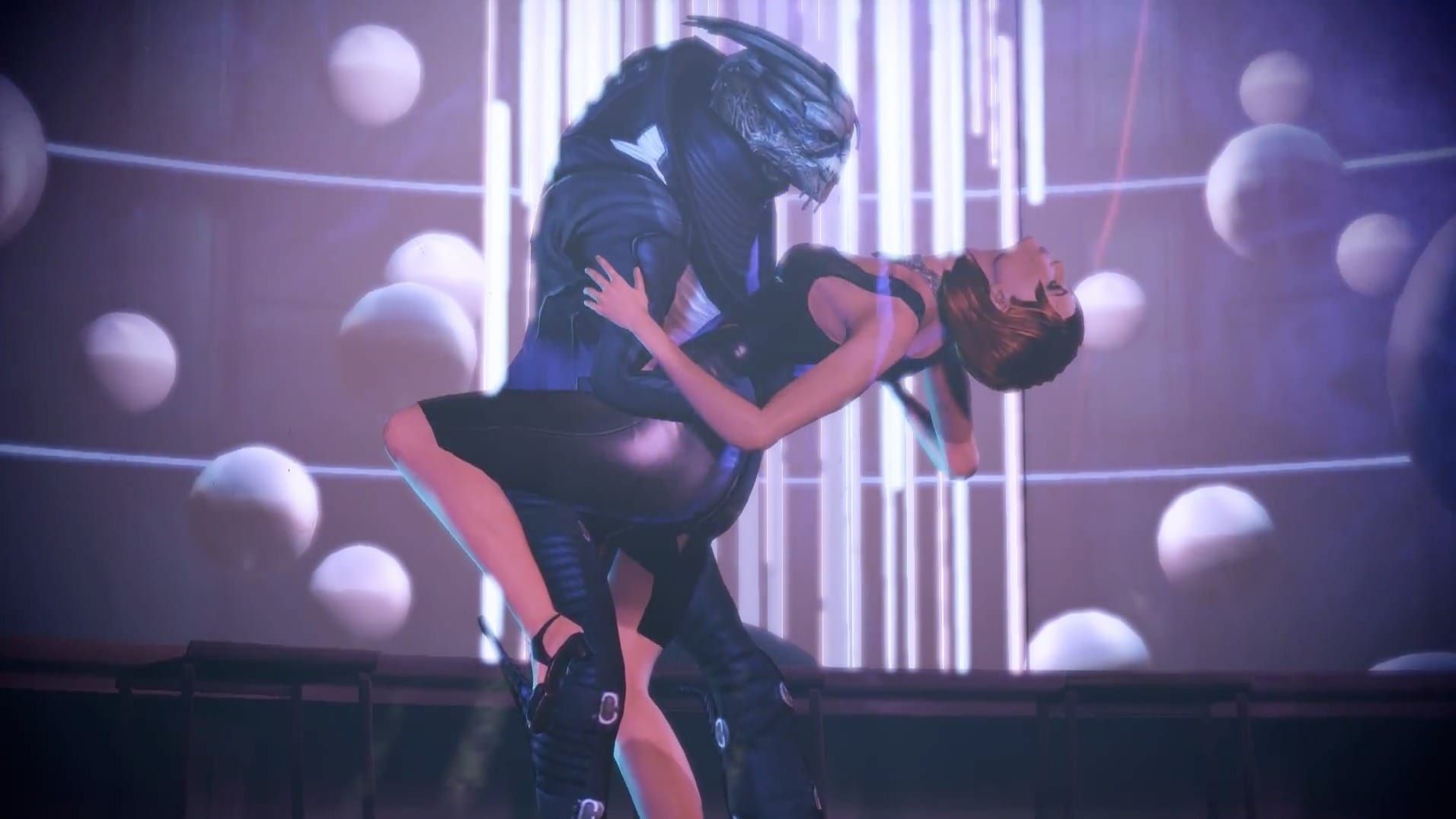 Please note that there will be considerable spoilers for Mass Effect, Mass Effect 2, and Mass Effect 3 stories and romances inside! Read at your own caution.

Miranda Lawson is one of the most interesting characters to come out of Mass Effect 2, but you have to work for it to fully understand why.

On the surface, her character simply seems like she’s been added as eye candy. She wears tight clothing, is supermodel attractive, and has a different air about her overall.

Her personality is also cold and calculating. Everything she does at first seems to be in service of the human-survivalist paramilitary group Cerberus.

Through romancing her, though, you come to understand her tragic past. She seems like she is perfect because she was literally made that way by her father.

The wealthy egomaniac was obsessed with perfection to the point where he controlled both her lifestyle and how she looked, using his own genetic template to create her. Cerberus allowed her to escape his torment, giving her a place to make more of her own choices.

Miranda’s ties to her father and Cerberus are explored even further during the events of Mass Effect 3. Not only does she leave Cerberus, but there is also a mission where you can help her confront her father.

It always bums me out that she gets the short end of the stick when it comes to many of these romances, as she only gets a significant amount of time devoted to her in Mass Effect 2. Still, it is exciting that’ll we’ll get to peel back the layers of her character and explore the meaning behind beauty being skin deep again in the Legendary Edition.

Of all of the FemShep only romances, Garrus is hands down the best.

This usually cool, calm, and collected Turian turns into an awkward goof you can’t help but love when you decide to romance for the first time during the second game in the series.

From bad dancing to lines like “So… your, uh, hair looks good. And your waist is… very supportive,” it is impossible not to love him.

The relationship has plenty of layers to it as well, evolving from an important friendship to a fully fleshed out romance that explores respect, concurring a racial divide, and vulnerability across the series.

It’s amazing to see the two complete each other, especially when Garrus confides in Shepard about feeling lonely and wanting “something to go right.”

Just because Liara is the player’s first real romantic option with another species in Mass Effect, it doesn’t make her any less of a good choice, regardless of the sex of your Shepard.

Alongside being witty, kind, and a hell of a powerful biotic, Liara offers a ton of insight into the universe –thanks to the fact that she is 106 years young.

Liara also has the benefit of being one of the few romantic options that is around throughout the entirety of the series. Her continued inclusion throughout makes for a lot of nuances to her and Shepard’s relationship.

The couple can either stay together throughout, break up partway through, and even back together at the end. Shepard can even bring up the possibility of having little blue babies and settling down, causing Liara to open up about how much she worries about losing them again.

When you first meet Tali in Mass Effect, she’s a quirky, bashful genius on her Pilgrimage to bring something of value back to her people, the Quarian. By the second installment, she is no longer inexperienced, as her experiences throughout the first game’s events turn her into quite the badass.

Alongside her growth as a fighter, Tali also opens up a lot more as a person in the Mass Effect 2, even allowing the male version of Shepard to persue a romance with her. If he does, she adorable reverts back to her schoolgirl like attitude from the first game here and there, simply unable to contain how much she loves Shepard.

What’s interesting about this romance is that there are literal complications when it comes to making it work. Due to quarians’ weak immune system and dextro-amino acid chirality, physical acts of affection are dangerous and possibly deadly.

Despite this, Shepard and Tali can make it work, defying the odds and creating an adorable triumph of a love story as a result.

My main hope is that the Legendary Edition does more than simply pick a woman’s stock image phone from google, add an alien filter to it, and say that this is what Tali looks like under the mask.

Like Miranda, Jack is another underappreciated romance that simply doesn’t get enough love.

Jack is the embodiment of terrifying when you first meet her, as she’s a notorious criminal who has murdered, pirated, and kidnapped people across the galaxy with her powerful biotics.

She’s so dangerous that she was kept in cryogenic stasis after being caught.

After a while with the crew of the Normandy, Jack bonds and lets her prickly walls fall down. You find out that she was abducted and experimented on by Cerberus, forcing her to become a biotic, treating her terribly all the while.

You can eventually choose to have feisty intercourse with her, which is a delight in and of itself. The real payoff comes from talking to her down the line, though, as you can choose to pursue a deeper connection with her and get Jack to open up to you completely.

The scene where she breaks down into tears while Shepard holds her is still amongst one of the most heartwarming moments in the entire series.

While it is hard to imagine anyone not picking Garrus as the one true FemShep romance, Thane Krios is definitely a worthy choice.

Regardless of whether you’re playing as male or female, Thane becomes the most interesting character in the game when he’s introduced in Mass Effect 2. He’s got a unique look, a distinct personality, and is one hell of an assassin.

After getting into a relationship with him, Thane opens up about his disease and troubles with his son. While you get to hear about this if your just friends as well, conversations are much deeper when you’re actually romantically involved.

Thane even calls you his siha, which means “One of the warrior-angels of the goddess Arashu. Fierce in wrath. A tenacious protector.”

“Time for me is short, siha, but any I have is yours to take.”

While the romance ends painfully, as Thane dies at the hands of an assassin in Mass Effect 3, he thanks Shepard for giving him a reason to want to live.

The tearful bow on this sad romance culminates during the Citadel DLC, as Thane has a special recorded message for Shepard, telling her that they will meet again across the sea.