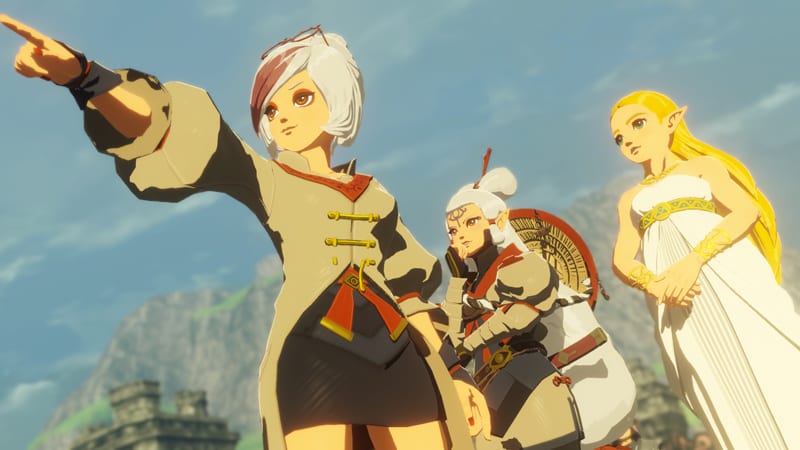 Today Koei Tecmo released a sizable batch of screenshots and artwork of the upcoming Musou-style game Hyrule Warriors: Age of Calamity, which will serve as a prequel to The Legend of Zelda: Breath of the Wild.

First of all, we get to take a look at several characters who will appear in the game, including the King of Hyrule Rhoam Bosphoramus Hyrule (and Zelda’s father), Robbie, Purah, Hestu, and Master Kohga.

We also take a look at the Guardians and at quite a few gameplay abilities.

Ice Maker lets you freeze enemies while Electric Rod lets you electrocute them. We can find Koroks in the grass and use Magnet Catch to literally catch iron weapons in mid-air and throw them back at enemies.

Lastly, the screenshots show off ability to change equipment and weapons.

Below you can read an official description if you’re not familiar with the game.

“Join the struggle that brought Hyrule to its knees. Learn more about Zelda, the four Champions, the King of Hyrule and more through dramatic cutscenes as they try to save the kingdom from Calamity. The Hyrule Warriors: Age of Calamity game is the only way to firsthand see what happened 100 years ago.

Battle hordes of Hyrule’s most formidable foes –
From barbaric Bokoblins to towering Lynels, Ganon’s troops have emerged in droves. Playable heroes like Link, Zelda and more must use their distinct abilities to carve through hundreds of enemies to save Hyrule from the impending Calamity.”

If you want to see more, you can check out the original announcement trailer, the first screenshots, the first gameplay, and more, the latest promotion video, and the previous trailer.