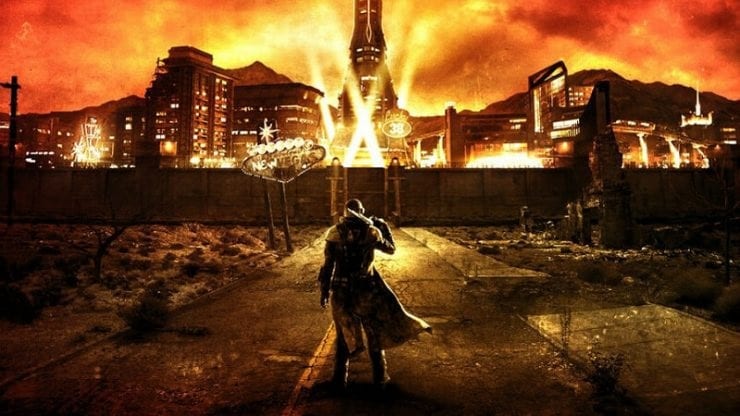 When it comes to games that one wouldn’t expect to age well, Fallout: New Vegas would be at the top of the list.

A spin-off from the main series of games and developed by Obsidian Entertainment instead of Bethesda, New Vegas was far from an optimized experience. It was littered with bugs, ranging from enemies falling through the world to the game completely crashing.

It had graphical issues that could leave environments looking like muddy smears, and its framerate could drop into the single digits if too much was happening on screen at once.

Needless to say, these elements made the game a nightmare for some to play upon release, and turned many off from the game in years since. As the years have gone on though, many have stood up to defend it as an unpolished gem, pointing to undeniable strengths that can be found by those willing to give it a chance.

And honestly, they’re right. Even with all of these issues, and even ten years after its initial release, Fallout: New Vegas’ flaws are balanced out by strengths that arguably make it the best modern entry in the series.

Where the other modern titles are content to offer the standard Bethesda experience, New Vegas tries to be something more. It takes the general gameplay loop and refines it, offering all of the factors fans loved from Fallout 3 like looting, shooting and perks, and refines them.

A lot of this is thanks to how Obsidian approached the game’s perks. While many of fans’ favorites from Fallout 3 make a return and are just as useful as ever, there are many more which help players cater to their exact playstyle.

Those who enjoy donning heavy armor and tanking damage can get perks that allow them to do so more easily. Those inclined to stealth can find perks that buff their light armor and sneaking skills, and those who want to sew chaos with their words can nab perks related to convincing and manipulating others with ease.

Some even allow you to shape your character’s personality, giving them special dialogue options related to everything from their skillset to their sexual orientation.

It’s a welcome departure from Fallout 3’s perks, where some were clearly better than others and didn’t have much bearing on the overall game.

Not only that, but they play into another of Fallout: New Vegas’ biggest strengths: the main character is much closer to a blank slate.

They aren’t a former soldier who lost their wife and child to an unknown faction, or the former resident of a vault on the hunt for their father. They’re just an unfortunate courier who nearly died delivering a package in the post-nuclear war Mojave Wasteland, and who has no obligation to pursue anyone or anything if they don’t want to.

Which is great because choice is integral to Fallout: New Vegas’ world in a way it never was in Fallout 3 and Fallout 4. Who players choose to interact with, and how they interact with them, directly impacts where players can go, who they can ally themselves with and what endings they earn.

Choosing to be an upstanding citizen who sides with the New California Republic can lead to thriving settlements dotted across the state, albeit with taxes applied to all purchases. Being a ruthless killer who allies themselves with the Caesar’s Legion, meanwhile, can lead to more scattered settlements who give you whatever you want out of fear for their lives.

Players can even choose not to side with anyone. They can be a wildcard, playing every side until the final stage of the game where they take control of everything and everyone.

This weight to the choices you make extends to side missions as well. Choosing to side with a town’s residents in their fight to beat back scavengers; save an Elvis-inspired ruler of the outskirts of New Vegas; or kill the shadowy ruler of the strip can have lasting consequences to the rest of your game, and impact whether certain factions or companions will view you as an ally or a threat.

It’s honestly astounding just how much Obsidian makes it feel like what players do in the game matters, and in a way it makes New Vegas feel like the kind of RPG experience both Fallout 3 and Fallout 4 were striving for.

Which brings us to Fallout: New Vegas’ strongest aspect: Its main story matters, and is one players will want to complete. Instead of being this ever-present obligation in the background, it feels like something players want to be a part of, and that they’re properly rewarded for completing.

Ticking off each stage of the main mission line doesn’t just check a box and net you experience. It opens up portions of the map, allows you to interact with more factions and expands upon the ways you can interact with the world.

And that’s to say nothing of the characters you can meet as a result. Benny, Mr. House, Yes Man, Caesar and the like are all undeniably interesting characters, and make the effort of completing main quests to reach them feel well worth the trouble.

As a result, it feels like there’s more of an end game than in Fallout 3 or 4, where one simply plays until they get bored. There’s a definitive ending which leaves the player feeling accomplished by the journey’s end, and like all of the time they’ve spent in the world wasn’t wasted.

This all serves to make Fallout: New Vegas all the more frustrating as a complete package. It has all of these strengths, all of these elements which help it stand out as the best in the series, that are overshadowed by an avalanche of bugs and performance issues.

This doesn’t look to be a fact that will change anytime soon either. There’s never been any hint of a current or next-gen remake for the game, leaving fans to mod Fallout 4 in an attempt to bring the game into the modern age.

All the same though, it’s hard to deny that there is and always will be something special about Fallout: New Vegas. For all of its flaws, it managed to improve upon the Fallout series’ framework in ways mainline entries still struggle with.

It’s still a struggle well worth enduring whether you’re a longtime fan or just discovering the series, and likely still will be 10 more years down the line.