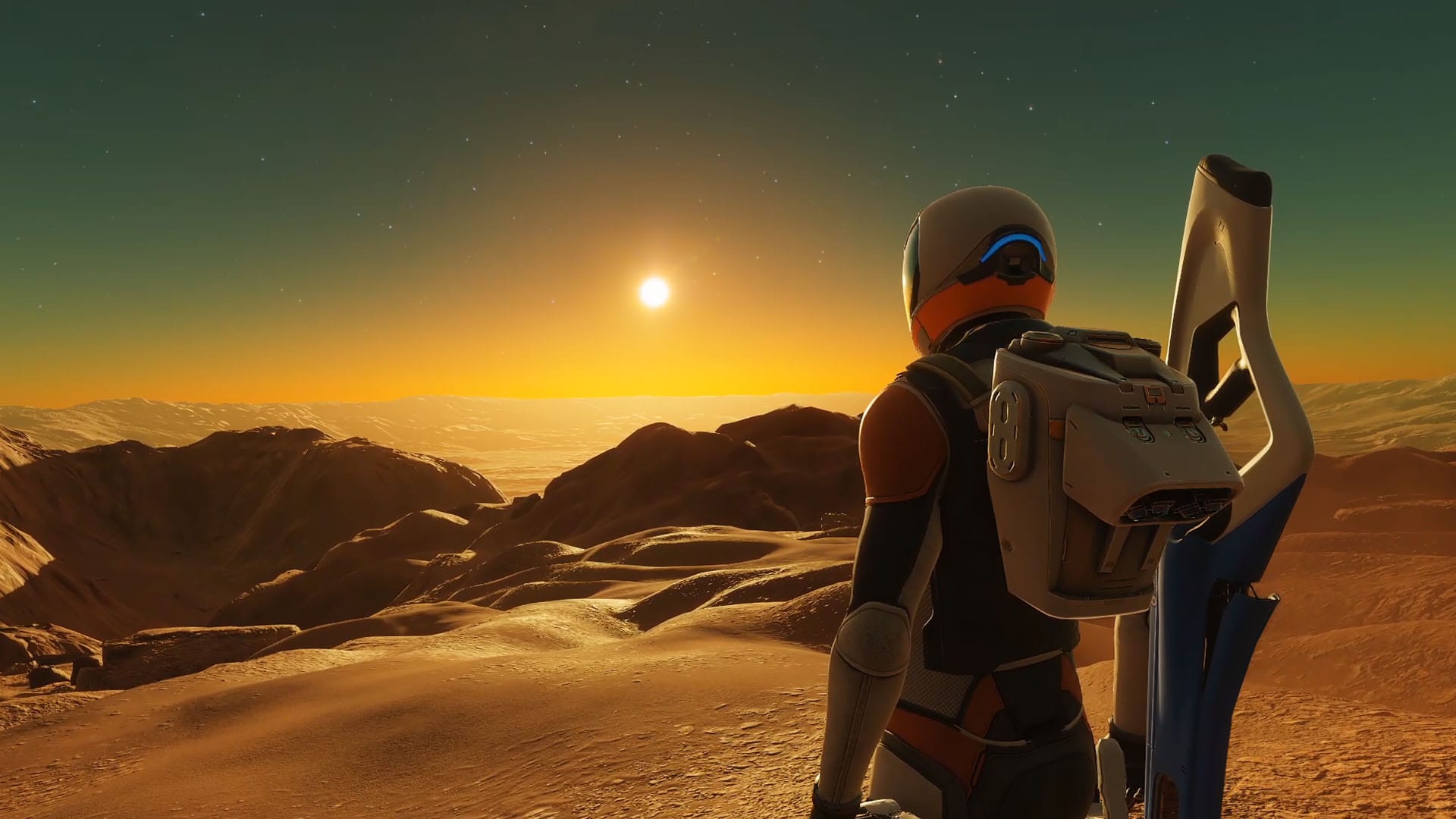 Elite Dangerous is marching towards another major expansion titled “Odyssey,” due out in 2021. It will add full on-foot exploration of many planets in the game’s Elite Universe.

This is obviously a significant change for a title that has, for the most part, kept players in the comfort of their ship. Recently, Twinfinite had the opportunity to speak with Gareth Hughes, principal designer of Elite Dangerous: Odyssey, as well as its art director, Jonathan Bottone, to learn more about the upcoming release.

Ed McGlone, Twinfinite: So one thing a lot of fans are wondering is the level of detail on the planets? Will there be things like settlements and landmarks on the surface to make it interesting to explore?

Gareth Hughes, Principal Designer of Elite Dangerous: Odyssey: We’re planning to have a variety of activities that players can engage in on planet surfaces; from settlements, down to what we call points of interest which we call transient elements that can kind of spawn in and out which allows us to fill the surface up a little bit.

Whereas our fixed points are the settlements and planet ports. Planet ports are ports, as you see in the game already, they are a big sort of draw for a lot of players.

A lot of commerce happens there… trading. This is where you buy your new gear, it’s where you’ll upgrade that gear. It creates a social space where for the first time players will be able to get out on foot and socialize in a safe space… which is quite a novelty for Elite [laughs].

Then, on the slightly smaller scale, we have what we call settlements but actually these are quite big. They range from fairly large industrial kind of endeavors, down to military bases, and to small outposts, almost like little villages right on the frontiers of space.

If you want to, you can engage with a faction that owns a settlement that happens to be at war, maybe a big conflict zone. Maybe you end up having a proper battle where you can help them win and therefore help them within that system.

Jonathan Bottone, Art Director of Elite Dangerous: Odyssey: [It’s also about] traveling to those destinations and making it a rich environment and experience in itself, just actually getting there. So traveling there and exploring that location before you even go to some of these points of interest… there’s gameplay there around you.

Ed: How do you expect the chance to go boots on the ground will change the core gameplay loop of the game?

Our design philosophy was to identify what our player base loves about Elite and distill that down and make sure that those game loops and things that people love engaging with are represented on foot as gameplay loops that they recognize but are obviously presented in a way that is appropriate for foot gameplay.

It’s more a continuation or an expansion with this layering across the top of the existing game rather than something that is compartmentalized and stands apart.

Bottone: The design team did an amazing job of interweaving and building on the existing systems that were already there to unlock this extra potential that Elite has.

Ed: Well let me rephrase then. How will it enhance the existing gameplay, and make it an even more complete experience?

Hughes: So I think it gives more intimacy to the game. Let’s take the combat. Ship combat is really cool in Elite, right? It’s kind of flight simmy, but it’s not too simmy, and it’s just really exciting and fun to engage with.

But it is over quite long distances and it has its own tempo and pace. When moving on foot, the combat is going to feel different. It’s going to have slightly more urgency and intensity, perhaps.

With exploration rather than looking for planetary bodies… – sure, you’re going to do that in your ship and scan them – but right now if I land and I start to explore on foot, what am I going to find at that more granular level? So, I think it allows players to go from where they were and zoom in on the game on the parts that they really enjoy.

Bottone: It makes you more vulnerable to the environment of the game as well. You’ve been in a cage of the ship, and now you’re kind of able to be inches from the void, it means that you’re really going to have to take in what you’re doing in a completely different way.

Hughes: John touched there on almost a survival element, and I think that’s very much something that we’re playing on. You’re not a superman, you’re a man in a suit in the vacuum. There’s inherent risk just being outside of your ship.

We have navigation…but you might go too far and the journey back can be really intense! Am I going to make it? Or am I going to suffocate in my suit a hundred meters away? So there are some really cool, intimate, and intense moments that come from the foot gameplay.

Ed: Will there be changes made to the atmospheric and planetary surface flight dynamics?

Ed: Looking into the future and for the longevity of Elite Dangerous, are there any plans to port to PS5 or Xbox Series X?

Bottone: As for the platforms and where we’re headed, I’ll tell you that we’re looking at PC, Xbox and PS4, as far as what we’re pushing it to, it’s not currently planned for PS5 or the Xbox Series X. We’re continuing to evaluate.

Hughes: When we deal with those platforms, we want it to be special.

Elite Dangerous: Odyssey will release on PS4, Xbox One and PC in 2021.