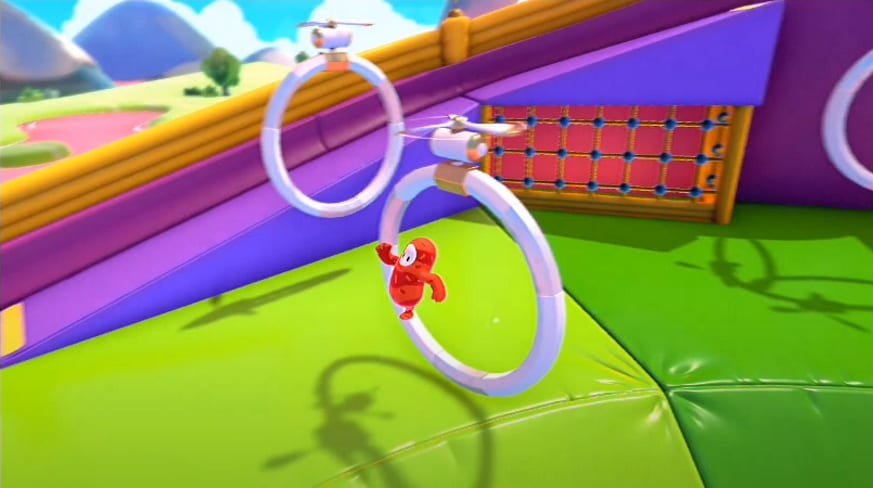 Fall Guys is taking the world by storm. The concept is simple: compete against 59 other players in a series of minigames. Players are eliminated in each round until only one person remains and takes the crown.

There are 24 different minigames in total, though you’ll typically play about four or five each game. From races to team battles, not all challenges are created equally. We’ve ranked the top 10 best minigames you can play in Fall Guys.

Gate Crash is very straightforward, and while some people might find that boring, it is one of the few minigames that can be completed consistently once you get the hang of it.

The gates rise and fall in a pattern, so this challenge is all about the timing. For the most part, you don’t have to worry too much about what the other players are doing here. Just keep your eye on a gate as you’re running and time your jumps properly.

The part of Gate Crash that sets it apart from being too repetitive is the final jump at the end. It requires a lot of careful timing to run down the hill and jump while the gate is open; most people run aimlessly and end up falling. If you master this challenge, you’re certain to get ahead easily.

Generally, the Tail Tag-related minigames in Fall Guys are simply not enjoyable to play. Both the regular single player and team Tail Tags are incredibly chaotic, and since the grabbing mechanics aren’t fine-tuned, it’s more frustrating than fun.

Royal Fumble, on the other hand, is a bit better. Since it’s limited to the final round, there’s much less chaos to deal with, and you can instead focus on the objective of having the tail when the clock runs out. This allows you to form a strategy instead of running around aimlessly, hoping for the best.

If you have the tail, it’s a bit easier to avoid the other players when there are fewer of them. If you’re chasing, you can plan to cut the person off if you can keep them in your sight. Either way, it definitely makes for a heart-racing final round.

Many of the team games in Fall Guys rely heavily on the other players, which can make them not so fun when your teammates aren’t the best. Hoopsie Daisy is one of the few in which you don’t have to rely on them too much.

The premise couldn’t be any simpler: jump through the hoops that appear on the map to score points for your team. Some of the hoops are right out in the open, and others require narrow dives to reach.

The best strategy is to find a spot away from other people and wait for hoops to spawn nearby. It’s better to wait for guaranteed hoops than to run around and lose one because three other people jumped for it. A single person can easily rack up enough points for their team to make it past this round.

Like Hoopsie Daisy, you don’t have to rely too much on your teammates here. One player from each team starts as “infected,” or “jinxed,” and the round ends when there is only one team left with someone who is not jinxed.

You can help your team so much no matter whether you are jinxed or not. Obviously, if you’re not jinxed, you can win the entire round for your team by staying that way until the end.

If you’ve been jinxed, though, you can still be helpful by infecting players on the other teams. It’s rare that the team games place so much power in the individual player’s hands, but it’s way more fun when they do.

The Whirlygig is probably the most memorable “first round” game in Fall Guys. It’s a chaotic obstacle course filled with rotating propellers, and each segment of the course increases in difficulty.

The thing that makes the Whirlygig so much fun is that there are a few “high risk, high reward” paths you can take. For example, cutting through the center of the course at one point is a shortcut, but unless it’s timed perfectly, you’ll be hit by the propeller and flown off the into the void.

Alternatively, you can take the safer but longer path to the goal. It’s always hilarious to see people fly across the screen because they didn’t time a jump correctly… until it happens to you.

There seem to be a lot of mixed feelings about See Saw. In most cases, it can actually be very fun if you slow down and think, which is the opposite of what many people do.

It can be very tempting to follow the masses and jump for the see saw platforms along with everyone else, but that just causes you and the group to fall and end up as a giant crowd again. If you take your time and go in the opposite direction as the masses, you’re way more likely to end up at the top.

It’s a great feeling to pull ahead in this minigame because then you can just jump in the center of the see saws and not have to worry about anyone else throwing you off balance. If you fall behind, don’t panic. This is one of the more forgiving games to pull ahead after falling behind.

Rock ‘N’ Roll can be tough if your teammates don’t know what they’re doing. But when they do, it’s a ton of fun.

The prime strategy for this minigame is to have two or three people guiding the ball through the simple obstacles while the rest of the team runs ahead. The players who ran ahead can attempt to stop the other team from pushing their ball down the hole into the goal before your team scores.

It’s super satisfying when your team works together to do these two things efficiently. There’s not a lot you can do here as an individual player to save the round if your team is bad, but with the right amount of teamwork, it can be a blast.

Slime Climb is the one minigame in which my opinion of it completely changed after playing it a few times. At first, I hated it because I kept panicking to push through the crowd, ultimately falling into the slime and losing.

Once I realized that it wasn’t a race against the other players but instead against the slime itself, I came to appreciate it much more. Any player who crosses the finish line qualifies for the next round.

It’s a game in which you can take a deep breath, let the crowd move ahead of you a bit, and take your time through the obstacles. The slime doesn’t move too quickly, and it doesn’t matter if others cross the finish line before you. It still takes skill, but you don’t have to panic.

It’s hard to describe the rush of adrenaline felt when you know it’s the final round and all you have to do is step on a few hexagon tiles to win the crown.

It sounds simple, but man, it’s a lot harder than it sounds. All you have to do is be the last player standing after the others have fallen through floors of tiles. Hex A Gone is the perfect mix of luck, skill, and strategy.

Luck comes into play in regards to how the other players move. Skill is needed to run or hop across the tiles in a path that won’t send you falling to the tier below. Strategy lies in running across certain tiles so the other players will fall before you.

Hex-A-Gone is tough because you can be on fire one moment, but fall four floors to your death the next. And that’s exactly what makes it so much fun.

Fall Mountain feels like the ultimate final challenge, and it may be the most rewarding minigame to come in first place.

There are no special gimmicks or tricks in this one. It’s not too reliant on either luck or strategy. It’s a simple obstacle course to the top of the mountain, and whoever grabs the crown first is declared the winner.

Playing this course makes me feel like I’m truly competing on a TV show to race to the top of the mountain to hit the button at the top to win it all. It has elements of many other minigames mixed into it, such as falling objects and spinning hazards.

If you can read and react to the obstacles quickly enough, you can break ahead of the small pack to reach the crown. But be sure to time that final jump carefully or else you’ll be handing the victory to someone else.

Which Fall Guys minigame is your favorite? Let us know in the comments below. If you’re unfamiliar with the game, you can check out our review here.