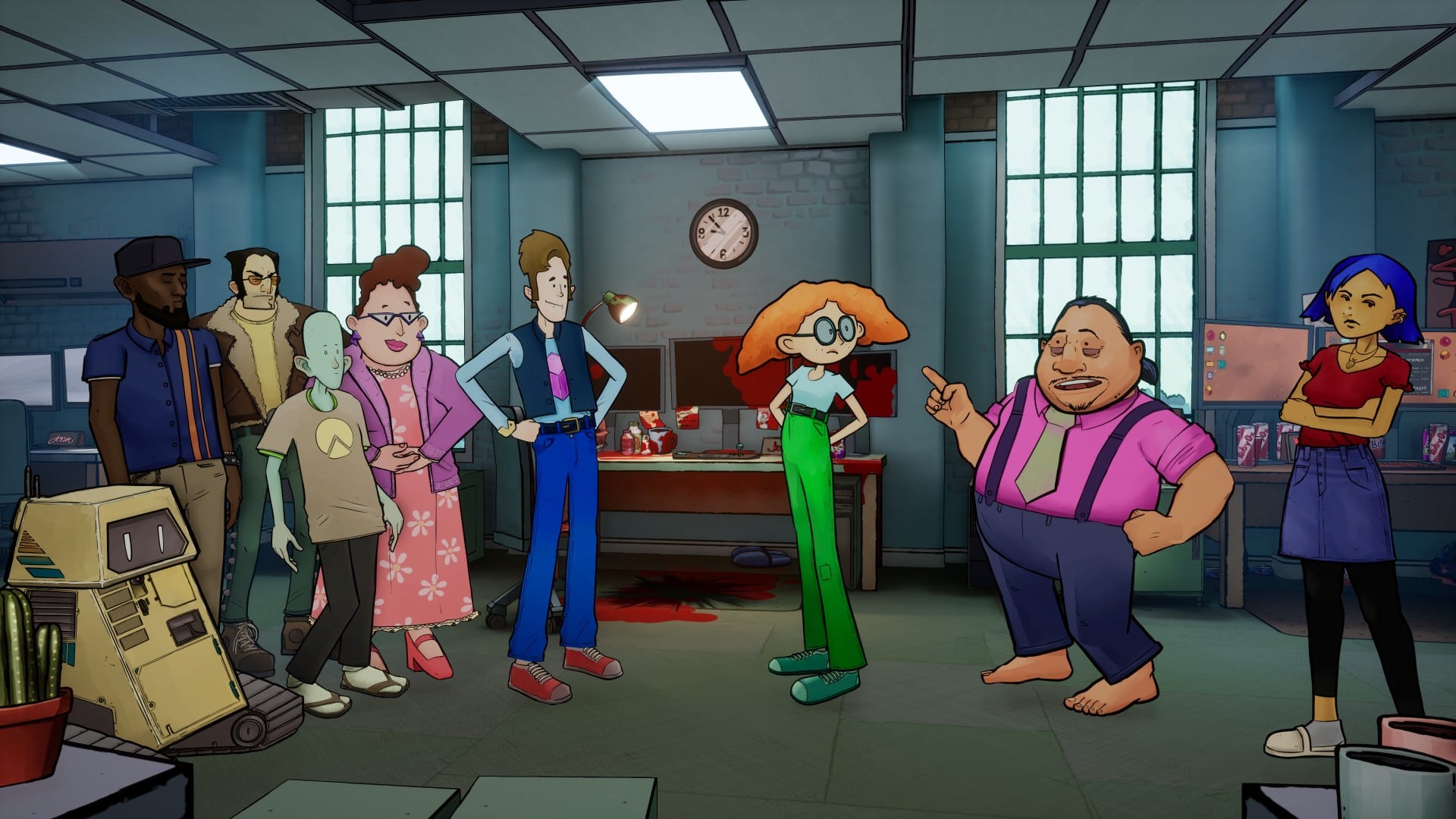 It’s really hard to pin down exactly what kind of game 3 out of 10 is, which while playing it, I got the sense this was the goal.

3 out of 10 is being developed by Terrible Posture Games, which is made up of the folks behind Tower of Guns and Mothergunship. At its core, though, it’s an episodic adventure game where players control various developers at the world’s worst game development studio, which is a departure from their previous work.

That said, in these compact 30-60 minute episodes you’ll be spending just as much time in minigames that are homages to other genres and games. At least that was the case in 3 out of 10’s first episode.

It was clear after briefly speaking with the developers this week that they are trying to have fun with 3 out of 10 and that they seem open to lots of experimentation in both the gameplay and the story.

The first episode is about a new employee, Midge, who is acclimating to her new art director job at the game development studio known as Shovelworks, after the previous person who held the position spontaneously exploded, leaving quite a mess.

She’ll bite off more than she can chew as she’ll have to contend with a tentacled monster in the fridge, angry mobs of protesters, and some kind of ritualistic sacrifices of interns to the mysterious game engineers.

They are all trying to work together, somehow, to make their latest game, Surfing With Sharks, better than a 3 out of 10.

With a couple of exceptions, everyone in the story is quite idiotic, and it’s definitely meant to be irrelevant and silly.

I really enjoyed the game development bits and even though it wasn’t the peak of gaming comedy this generation, it was cute and had me smiling throughout.

The minigames aren’t groundbreaking stuff, but they are fun, bite-sized tributes to games that you may remember from your childhood.

There’s a puzzle game that reminded me a lot of Yoshi for the NES, where you needed to swap columns around to stack ingredients and create recipes, a boss fight where you need to hot potato a caged intern before it’s captured by an angry mob, and a game where you need to pose an action-figure in a specific way as quickly as possible.

Also, you can always play the latest build of Surfing With Sharks, which is kind of an old-school NES/Tiger game where you need to move around to dodge obstacles and sharks and get to the end. It’s also the only of its kind: an endless runner that… ends. It needs some work, to say the least.

I’m not going to get too attached to anything that I played in this first episode though. The series is going to come at fans fast, as all five episodes will be distributed out within a five-week period.

We spoke to Joe Mirabello, creative director, and Chris Zukowski, technical director, at Terrible Posture Games and they informed us that 3 out of 10 will take various twists and turns throughout the five-episode arc and may not be married to sticking with the shtick of game development meta-jokes.

Although I enjoyed them the first time around, I can see how they might run out of material quickly if that was the only focus.

The minigames will, of course, be getting mixed up as well as the developers look to explore different genres and homages that they can create within Unreal Engine 4.

3 out of 10 is made entirely within the engine with no third-party animation and rigging tools, and was a large part of what created the mutual attraction between the developers and Epic Games.

According to the 3 out of 10 team, the game wouldn’t have been possible without the support of Epic Games, and the exclusivity arrangement, in this case, made sense to them.

Considering 3 out of 10 is free on the Epic Game store, and will be rapid-fire releasing, it’s not going to be too challenging to keep tabs on it and see if it’s for you.

The first episode is out today (you can check it out here) and will release new episodes every week for free until all five episodes are out exclusively on the Epic Games store.