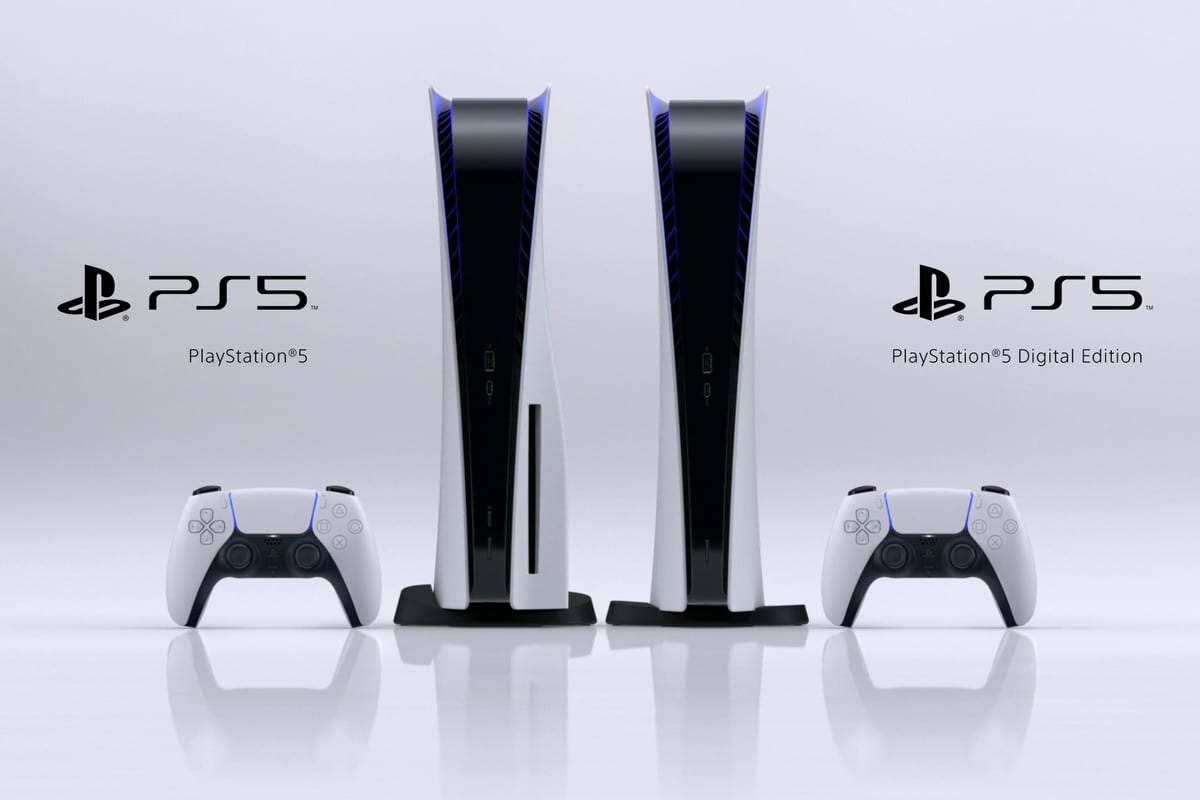 Finally, Sony revealed the PS5’s design for the very first time during last week’s Future of Gaming showcase. And yes, it looks like a router, and a whale, and a duck’s bill, and all the other hilarious memes. But beyond the divisive aesthetic, the big takeaway for me was the tandem reveal of a second hardware option, the PS5 Digital Edition.

Offering the exact same experience as the standard option, the PS5 Digital Edition’s lack of 4K UHD Blu-ray disc drive makes it sleeker and smaller. More to the point, it’s the SKU for those who hate buying physical and all the inconveniences that come with it.

Can’t get out to the shops because of an impending pandemic? No problem. Don’t wanna get off the couch because… lazy? Your game’s a button press away! The PS5 Digital Edition solves all of our bone-idol 21st-century problems, and I love it.

So much so, in fact, that I’d almost be tempted to pre-order it over the standard PS5 SKU, especially as I’m certain it’ll cost less. But then I live in the UK, which means I’d essentially be shooting myself in the foot by doing so.

A price disparity between physical and digital games has been a thing for quite some time over in the UK, and from a quick glance at the French PlayStation Store and Amazon pricing for The Last of Us 2, it looks as though that’s the case across the whole of Europe, too.

For now, from a European consumer’s point of view, unless you really detest physical, buying digital just doesn’t make financial sense; particularly so, when it could be argued you don’t ‘technically’ own the game when you do so. You own a license, in reality, which can be revoked at any given moment (or lost entirely if your account got hacked or banned), a fact that has been a sticking point among consumers for years now.

This price disparity, from what I understand speaking to my Yanky-doodle colleagues doesn’t exist in the US, and a lot of them are far more willing to take the plunge as a result. If Sony can get digital pricing to be more competitive in Europe, it’d surely help the PS5 Digital Edition’s cause in these territories.

Take, for example, Naughty Dog’s upcoming The Last of Us 2, which costs £54.99 to pre-order digitally on the PS Store. I can preload it ahead of time, and I’ll get some bonus pre-order goodies for doing so, but I can’t trade it in or sell it. I’m stuck with it forever.

Then we have the physical copy, delivered right to my door, complete with pre-order goodies (including some physical guitar picks), that can be traded in or sold once I’m done. That costs £48.85. That works out at £6 difference in price on one of Sony’s first-party titles.

It may not seem like a lot, but that can add up quickly over the course of a year. Say you buy five new releases, that’s £30. After buying seven new releases physically as opposed to digitally you’d have saved enough to buy a whole additional game. That’s without factoring in trade-in or resale value on your physical games, too.

In New Zealand and Australia, where physical video game prices are hugely inflated as a result of import costs, Sony’s digital store does offer parity in pricing at $119.95 as a maximum for new releases. Again, though, the lack of resale value still makes digital transactions less appealing even when initial costs are even. The problem rears its head in Canada too, albeit at a slightly reduced premium of $79.99 for both physical and digital.

The fact that digital games are devoid of any re-sale value is a major issue, one that I do wish somebody would do something about. If solved, it would play a huge role in balancing the economics of investing in an all-digital platform.

A digital video game ‘economy’ in which digital game licenses could be traded or ‘resold’ for PlayStation Store credit would certainly go a long way in making an all-digital future feel far more appealing.

Imagine, if these digital trade-in values offered better returns than the second-hand physical market, it would help to off-set that darn price disparity that makes buying digital less appealing in the current generation.

Despite the added cost, though, I do appreciate the convenience of going digital. Not having to change discs, not having to install games — or day 1 updates — for hours when you just want to play it. It’s brilliant, at least if you make the most of the preloading period that many games now allow for.

But for those who own the PS5 Digital Edition, the consequences of not preloading your new game are likely to prove a major bummer. You could be looking at downloads of over 50 GB for AAA titles –not an issue if you’re lucky enough to live in a well-connected area, but venture away from densely populated hubs and internet infrastructure begins to wane dramatically.

In the UK, for example, back in 2018 average home broadband speeds reached 46.2 Mbps; by no means terrible, but when compared to the US’ 2020 average speed of 135Mbps (over three times as fast) and you can see there’s still some clear work to be done.

It’s not just us in the UK who are struggling. Those in the mid-west of North America are still enduring slow speeds, as are people the world over living in rural zones.

Take India, wehere 15.97% of its population were on Dial Up internet as of 2018. That’s a fairly hefty chunk for the country with the second highest number of Internet users in the world. There’s not just a price disparity that the PS5 Digital Edition needs to navigate, but an internet access disparity to boot.

Wales, too, where Analysis conducted in 2018 showed that people there were stuck with speeds slower than 12Mbps on average. Thanks to Download Time Calculator, a quick bit of maths suggests a 50GB game would take just under 10 hours to download. If you didn’t preload, that’s the last thing you want to deal with on release date after you get home from work.

Presumably, Sony’s strategy is to offer the new hardware’s digital SKU at a slightly reduced cost for those who do want to embrace the all-digital future. So, the PS5 Digital Edition is more a niche product, then, something catered towards a small section of the install base rather than the de-facto choice for many.

And that’s all well and good. I just can’t help but wish Sony would take it a step further and try to revolutionize the whole digital video game market with the release of PS5. Even a small trade-in system or discount package of some sort would go a long way to making the Digital Edition a far more appealing product, even for those enduring slow internet speeds and the like.

That’s the outcome we all want, right? The all-digital future, realistically, is the best future for the industry –a future where publisher’s savings from selling their games digitally are passed on and reflected in game prices worldwide; where we can have our games preloaded and ready to play in a matter of hours; where one’s digitally-purchased games can be ‘traded-in’ for a discount. And most importantly, one where we don’t have to stand up to change games!

Of course, we don’t know absolutely everything about the PS5 just yet. Maybe I’m jumping the gun before Sony announces something revelatory that would see digital prices finally fall more in-line worldwide?

Until then, though, the PS5 Digital Edition feels just slightly ahead of its time. It’s just waiting for the world to play catch-up.