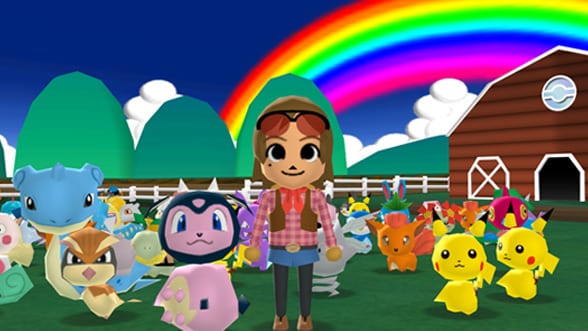 This week, we celebrate the 12th anniversary of the game My Pokemon Ranch. It wasn’t really much of a game, though. It was a $10 Pokemon storage system for Diamond and Pearl that could be purchased through the WiiWare download service.

Similar in concept to the GameCube’s Pokemon Box for Ruby and Sapphire, players could trade and store the Pokemon they had caught in the games. Unlike Pokemon Box, however, My Pokemon Ranch was the very first storage software to be released online to the general public.

My Pokemon Ranch was extremely simple in design. Run by a character named Hayley, the ranch could store up to 999 Pokemon (nearly double the amount you could store in a single Diamond or Pearl save file), and it allowed players to view 3D polygonal models of their creatures.

The game was criticized for being too simple, but we have to keep in mind that this was one of The Pokemon Company’s earliest attempts at a storage system that allowed you to connect your save file across multiple systems. A lot of the features included in My Pokemon Ranch are still present in the storage options we have today.

There were quests you could complete each day, which offered rewards that you could transfer to your Diamond and Pearl save files. The ranch could be upgraded up to 25 levels depending on how many Pokemon were stored, expanding the space each time.

You could take snapshots of the Pokemon you added to the ranch that could be saved on an SD card. Pokemon would react differently in the ranch depending on its nature in the game; for example, a Pokemon with a lonely nature might only play by itself instead of messing around with the other monsters.

There was even online connectivity in which you could visit other players’ ranches to see their Pokemon collections, although you couldn’t trade within the ranch itself.

Most notably, the game gave out rewards in the form of rare Pokemon. After upgrading your ranch, Hayley would give you hard-to-obtain Pokemon with special items or moves to trade back to your game. After storing 250 Pokemon, you’d receive the legendary Phione as a gift.

The greatest reward of all was obtained for depositing the maximum of 999 Pokemon into the ranch, which was no easy feat. Since Diamond and Pearl only let you carry 540 Pokemon at a time, this would take hours of catching and multiple trips. The reward at the end was a Mew, making it one of the only legitimate ways to obtain this mythical Pokemon at the time.

12 years later, as we store the Pokemon we’ve collected on the Home app, I can’t help but wonder why we haven’t seen greater improvements as the years went on.

After My Pokemon Ranch, we got Bank for the 3DS, which allowed us to trade and store our Pokemon, but it was a storage system and not much else.

There were no fun things to do, like play with 3D models of the Pokemon or take snapshots of them. There were occasional rewards, but they were distributed randomly, not through quests.

Now, in 2020, we have Pokemon Home, the latest solution for storing Pokemon outside of the main games. Aside from the storage system itself, it includes achievements, a reward for completing the Pokedex, and a few other bells and whistles. But aside from being on mobile phones instead of the Wii, it actually isn’t too different from My Pokemon Ranch.

I’m not sure if this can be attributed to Home being behind in the times, or if My Pokemon Ranch was ahead of its time, or maybe a bit of both.

The graphics in My Pokemon Ranch were nothing to marvel at, but the 3D models were kind of cute, and the game did a lot of experimenting that set the stage for Bank and eventually Home.

My Pokemon Ranch wasn’t perfect by any means, but it was simple and did what it was meant to do.

For all of the criticism that it faced at release, looking back, it got a lot of things right, especially when online connectivity between two different consoles was fairly new.

To collectors and completionists, My Pokemon Ranch was a valuable tool that helped pave the way for future storage systems.