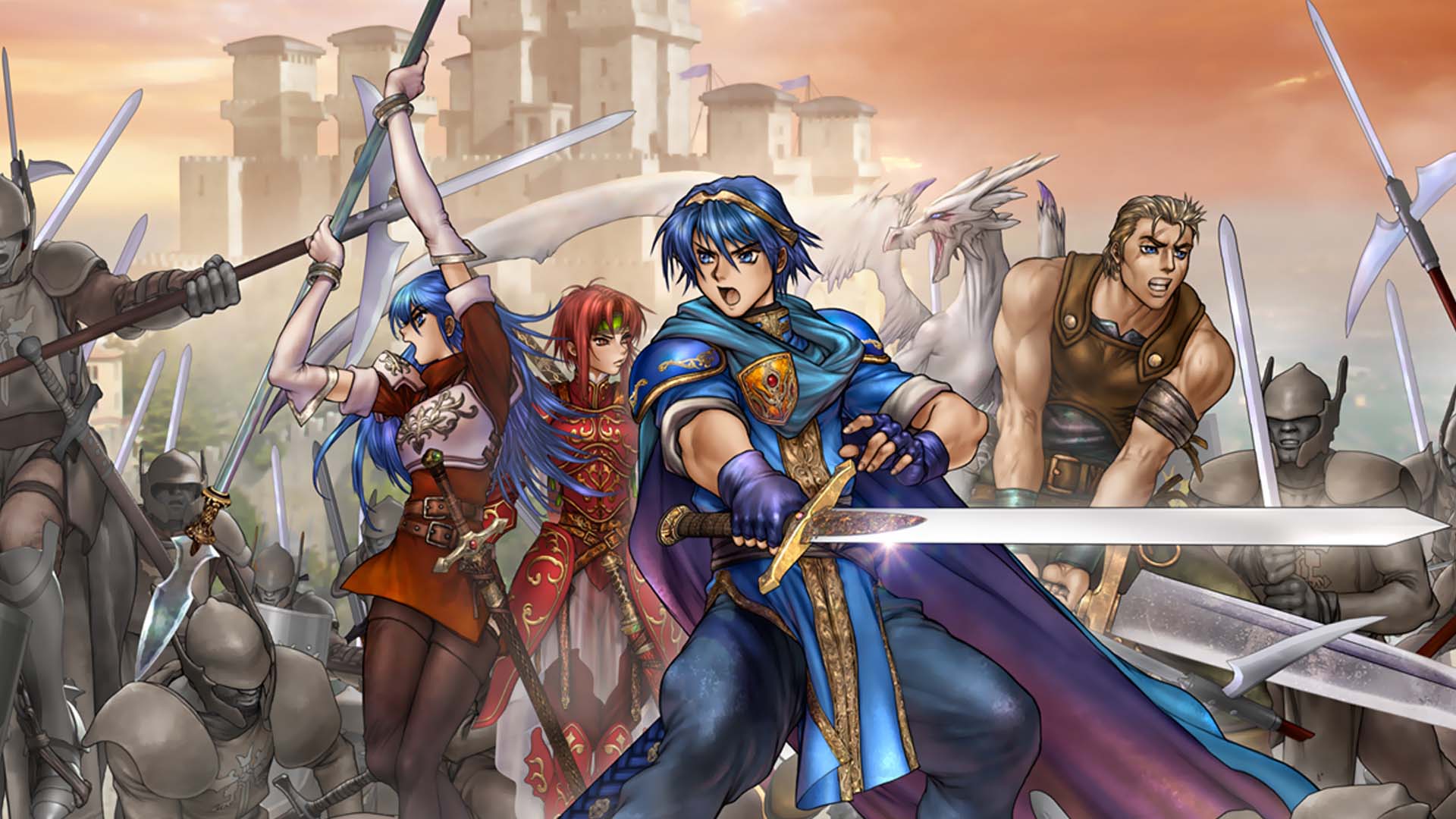 Lately, I’ve grown quite fond of buying old second-hand games without their original packaging, in order to enjoy the experience without having to fork out exorbitant costs for an illustrious “never played/fully packaged/vacuum sealed/dipped in holy water” so on, so forth.

After scoring a cheap copy of Pokemon Conquest to appease my burgeoning samurai spirit, my next target was the sizeable backlog of Fire Emblem entries I hadn’t even been aware of during their initial run on the market.

The community is quite outspoken in a lot of ways, and there’s something of a gatekeeper attitude among some members. They’ll insist that the fandom be divided into everything preceding the mega-hit that was Awakening on the 3DS, and the games that came after it opened the floodgates.

Partly because it’s like being a fan of an indie band before they became big, their quiet little bandwagon now bursting with members.

Mostly, however it’s due to the fact that, aside from staples like Marth, Ike and Lyn, many of the heroes from yesteryear have been shoved aside in favor of the more marketable newcomers.

Lord, the things I could tell you about Corrin…

I myself happened upon Fire Emblem a short while before its popularity boom, thanks to the 3DS Ambassador Program and its port of the GBA entry, Sacred Stones. For something I barely knew anything about, it ended up becoming my most played title of 2012.

One thing that stuck with me was how unforgiving it was in comparison to modern titles. In Three Houses on the Switch, you have a myriad of options to overcome your errors, the most prominent being the Divine Pulse — Fire Emblem’s equivalent to the schoolyard ‘make it so that didn’t happen’.

It’s certainly a far cry from my failings in Sacred Stones’ post-game Creature Campaign. I would sink hours at a time, venturing deep into the multilevel dungeons only for my mage to get felled at the last moment by a lousy skeleton archer who managed to crit.

“The rest… is up to you,” Artur choked, moments before I hit the reset button and flung the handheld across the room.

I haven’t touched a pre-Awakening Fire Emblem for several years, but now I had 2008’s Shadow Dragon in my grasp. As a remake of the very first title in the series, it married many of the classic concepts with conventions found in more modern entries.

It was time to stab some swains as Mar-Mar, and find out if I’d gotten too spoilt from my leisurely romps through Fodlan.

The most obvious adjustment to make is visually. The character models are sprite-based, but they animate smoothly, as if they’re alive, juxtaposed against more photorealistic backgrounds than I’m accustomed to.

It’s a little unnerving, to be honest, and it evokes the most curious memories of Dot and the Kangaroo.

More troubling is the early realization that this game really leans into the direness of its situation. In modern Fire Emblem titles, we’re having tea parties with our soldiers, perhaps even seducing them and lovingly stroking their cheek.

There will be no face rubbing in Shadow Dragon.

Within the first few missions, you must choose a unit to sacrifice in order for Marth to avoid capture. Because of this, there is no such thing as a perfect run. Either Cain, Abel, Frey, Jagen or Gaggles must die.

These stakes seemed unfathomable. This was the prologue, and already it demanded a more heart-wrenching decision than in the last four Fire Emblem titles combined. I had only met these fine gentlemen, how could I condemn one of them to certain doom?

It’s easily the most intriguing plot beat I have ever seen in the series, and though I love it conceptually, it goes against everything ingrained in me after being conditioned to expect nothing less than an optimal result.

Do you make your decision based on aesthetics? Growth rates? A morbid team-building exercise? In the end I opted for Frey, the canonical choice and the only unit I was unfamiliar with, but that wouldn’t be the only loss suffered if I wanted to get as much out of this game as I could.

There’s another curious element of Shadow Dragon that sees certain units join your army only if you’ve suffered enough losses. In the case of Norne, the adorable archer who has no apparent value, she downright refuses to cooperate unless I exchange a life for hers.

And so Jagen the grizzled paladin would gallop valiantly into the teeth of his enemies, knowing fully well that he was about to die. This was not only because I positioned him directly upon the deadliest part of the map, but I also stripped him of his weapons prior to sending him out, so that they wouldn’t be wasted when he bit the dust.

Clearly, Shadow Dragon paints a much more grounded picture of the horrors of war than what we have seen lately. The newer games have a handful of scripted deaths, but they’re usually telegraphed in one way or another. Here, people die simply so that you can succeed.

Shadow Dragon is generous with its unit distribution, perhaps to a fault. Entire battalions will join you upon starting chapters, and other than the introductory dialogue when they join your cause, you don’t really learn much about them.

Support conversations are scarce, and the wealth of soldiers really creates a nameless, faceless army. They end up feeling like the dwarves in the Hobbit, overly plentiful and hard to discern from one another.

Whether or not I was intentionally marching units towards disaster, I quickly learned that I had become far too reckless and foolhardy in my Fire Emblem tactics. Again, putting a unit in danger nowadays has about as much risk as wasting a rewind option, even if it’s the protagonist.

There were occasions where I would dabble with death in Three Houses, just to see how Byleth fared. One-hit KO from the Death Knight? Ha! That was amusing. Let’s undo that and move on, for we are nigh invincible.

As for Shadow Dragon, my units dying without my explicit permission served as a reminder that I needed to exercise more caution. Shiida was the first to fall, downed by an archer on a reconnaissance mission while trying to recruit the services of Nabarl. I never was careful with those stupid flying horsies.

Darros would croak shortly after, because axe users sure do like to flail at nothing, before being joined by Cord. At least, I think it was Cord. It might have been Gloin.

Despite all of the above, I proceeded to soft reset upon each collapse — I was still pursuing as close to perfection as I could. The game just kept banging me over the head with unit elitism, however, as it later dawned on me that there were no grinding opportunities between chapters.

You have to swiftly choose which units you’re going to invest the limited XP in, and leave the others on the sidelines.

Chiefly, this meant that Marth would be fed easy kills like a slovenly royal plunging his sword into a captured, wounded animal. Not only was he forced into action every chapter, but he’s the only one capable of visiting villages — is Draug not appealing to the eye? — and amusingly, seizing the capture point to claim victory.

You may have cleared a map of every single enemy, but until Marth says you’re done, you’re stuck there, milling about and twiddling your thumbs. Perhaps it’s an insight into the character’s megalomania, or just outdated design.

Everything comes to a head by chapter 6. Other than Frey and Jagen, my preordained lambs to the slaughter, I had kept everyone else alive, and my army was thriving. If I wanted to access the Gaiden chapters, however, I would have to make some redundancies on this map.

Accessing the myrmidon Athena requires you to have 15 units or less. I currently had 26 under my command. What then proceeded was an obtuse process of literal elimination, as I set about deciding who to bring into battle with me, with the explicit intent of sticking them upon an enemy pike.

It felt gross and unpleasant. The look of doubt on Matthis’ face, as if he knew that something was amiss. Then there was elderly Wendell, about to perish for a cause he never believed in to begin with.

I even recruited Rickard on that chapter, just to briefly enjoy his company before confiscating his sword and introducing him to the enemy general.

The Gaiden chapters are intended to be compensation for players who are struggling to keep their units alive, but to me, it felt more like a punishment for hoarding imaginary friends. Their lives forfeit, they would prove more obstacles than allies, sprinting after one another with the inglorious destiny of 11 tragic lemmings.

And for what? So that I could play one extra chapter, and so that I may acquire one extra unit? It was a steep price to pay for my inquisitive nature — curiosity would kill not only the cat, but Wrys, Vyland and countless others, to boot.

Ultimately, playing Shadow Dragon in 2020 made me long for some of the excess that the series would later become famous for. I wanted to uncover more about these characters. To grow to love them, and to feel something when they fell in battle, no matter how low the stakes were.

I’ll be interested to see how 2003’s Blazing Blade, the first Fire Emblem released in the west, compares. It’s taking its sweet time to arrive in the mail… alas, fast travel wasn’t as common back then.