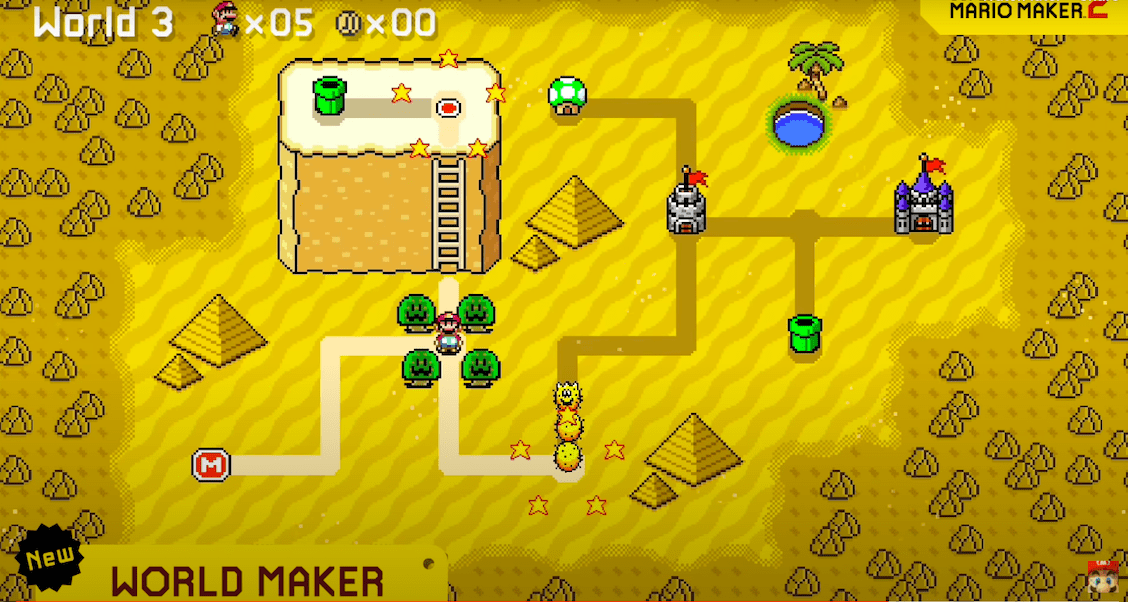 Super Mario Maker 2 is closing in on its first birthday, and other than the Master Sword update, post-launch support for the game has so far been pretty light. Many fans, including myself, had been resigned to the fact that a World Maker likely wasn’t in the cards this time around and would have settled for a new course theme or two. Even that concession was starting to look dicey with impact COVID-19 is having on game development.

Then out of nowhere, Nintendo released a bombshell of a trailer teasing the now live “final major update” to Super Mario Maker 2. And let me tell you, if this is the last one, it’s going out with a bang!

I was up until the wee hours of the evening/morning today trying to get as much work as I could on Super Ed World before I had to go to bed so I could wake up for work on time. I couldn’t help myself as the allure to start putting together my own Super Mario game, something I’ve dreamt about since I was a kid, was too strong.

The highlight is, of course, the World Maker, which will certainly inject a dose of life into a community that was starting to scale down to its most hardcore fans.

While it’s lacking a few features (aspirational goals for future games, I suppose) it’s certainly a quality addition to the suite of features in Super Mario Maker 2.

You can create up to eight worlds (standard in most Mario games) that can contain up to four courses each from your created levels. In addition, you have mini-game huts, such as the sliding match game from SMB3, that players can visit to get extra lives, and warp pipes to add a bit of creative flair to how players get around the map of each world.

While being limited to four courses per world might be constraining for the most skilled and dedicated creators, it’s more than enough for the average person who has only made a course or two ever. You can, of course, add as little as one course per world if you wanted to.

A nice touch is the surprising amount of ways that you can customize the look of your worlds. You can add clifftops, bridges, decorations, themed course entrances, etc.

What’s a bit frustrating, but so totally Nintendo, is that from what I can see there isn’t a way to really sort or sift through Worlds. Unlike courses, you can’t label them, and when you enter the Worlds menu from Course World, you just get what appears to be a random selection.

What you can do though is look up the top makers, and see the World that they have uploaded (you can create eight “games” but have one uploaded online at any given time. It’s definitely annoying, but keeping tabs on the best makers is something dedicated Super Mario Maker 2 community members already do. So C’est la vie, I guess.

The real icing that’s missing on this cake though is the secret exits and courses. That said, I’m not shocked were left out. Adding the ability to have multiple exits in a single level sounds like something that would require a pretty major change to the entire game which is currently designed as simply: start at entrance get to exit. Even World Maker, as great as it is to have, is a pretty simple as it’s just an organized way to show off your courses.

Still, World Maker has been the most requested feature since Super Mario Maker 1 was released, and finally getting it on its own would have been a great enough send-off. But in the words of the immortal Billy Mays, that’s not all.

The final update also added a slew of new power-ups, one for each of the classic themes including the Super Mario Bros 2 mushroom, Frog Suit, Power Balloon, and the Super Acorn. In the extra 3D World theme the boomerang is now available alongside a bunch of new hat items including cannon box, propeller box, red POW box, Goomba mask, and Bullet Bill mask.

With the powerup active you can now land on the heads of enemies and actually pick them up and throw them. This can be utilized to destroy certain types of blocks, fly across bullet bills, or even pick up chain chomps as use them as a defensive tool. While it’s not the same as an entirely new SMB2 theme, it does radically change the way that a course can be played and in a lot of ways, it effectively functions as a theme.

Also, Phanto is now in the game if you’re interested in giving a whole new generation of kids PTSD.

Boss enemies are also spiced up as all of the Koopalings are now in game as well, each with their own unique flair. Facing off against Boom Boom, Bowser and Bowser Jr. would have gotten dull over the course of eight worlds, that’s for sure.

I could continue to gush about this update (the Frog Suit lets you walk on water now which is super neat!), but I think you get the point.

If you would have told me that a hypothetical Super Mario Maker 3 was going to launch with all the stuff we had in SMM2 but include a SMB2 theme and a dedicated World Maker, among other new powerups and enemies (Mecha Koopa is back with a lot of new tricks), I would have totally signed up for that.

If not a sequel, I would have certainly also paid good money for a DLC which contained all of the above as well.

Either way you slice it, this is a massive update which Nintendo could have absolutely charged fans for, and would have been justified in doing so as it adds incredible value.

There’s now a long term aspirational goal for every dedicated course maker to create their very own Super Mario game, filled to the brim with the best of the best of their courses. Yes, there will be lots of Super Little Joey Worlds that are filled with trash, but savvy searchers will be able to benefit from quality course makers eventually putting out entire new Super Mario games that can rival the quality of the real ones.

Depending on your tastes, fan worlds could even surpass official games when you take into account how many tools Super Mario Maker 2 provides that don’t appear in traditional games.

While it’s sad that there doesn’t appear to be any more major updates in the cards for Super Mario Maker 2, I’m going to have my hands full for the foreseeable future putting together 32 of my best courses.