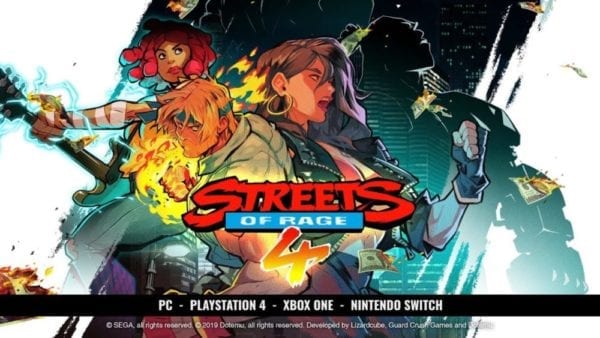 A new gameplay trailer has hit today for Streets the Rage 4, the newest game in the Streets of Rage series that have been dormant for 25 years. The new installment is being developed by Dotemu, Lizardcube, and Guard Crush Games.

While the trailer does show off plenty of streets and tons of rage, the simple existence of a fourth game that’s been waiting in the back of the minds of gamers isn’t even the best part of the trailer.

Not only do you play as series staple characters Alex and Blaze alongside three others (including already seen Floyd and Adam), but the roster has been bumped up even further. In addition to the five characters, an additional 12 unlockable characters are in the game from across all three previous Streets of Rage titles.

Previous versions of Axel and Blaze are also among them, letting you continue to rage with the best that nostalgia has to offer.

As for the tunes, the soundtrack has been crafted by Olivier Derivière. On top of that and fitting for a game that is really playing up being retro and letting you enjoy your favorite things about SoR, the soundtrack includes large contributions from series composers Yūzō Koshiro and Motohiro Kawashima.

Even with this new soundtrack, if you feel like taking things old school, you can switch to music from Streets of Rage 1 and 2 (sorry SoR3, fans).

Check out the trailer below, and get feast your eyes on some roads of anger.

There is not an official release date outside of “soon.” Recently the Nintendo eShop put up a release date the developers were quick to say in a press “is not final or confirmed by publisher and co-developer Dotemu.” This incorrect release date has since been corrected and the store page now says Available 2020.

Streets of Rage 4 will be releasing for PC, PlayStation 4, Xbox One, and Nintendo Switch.