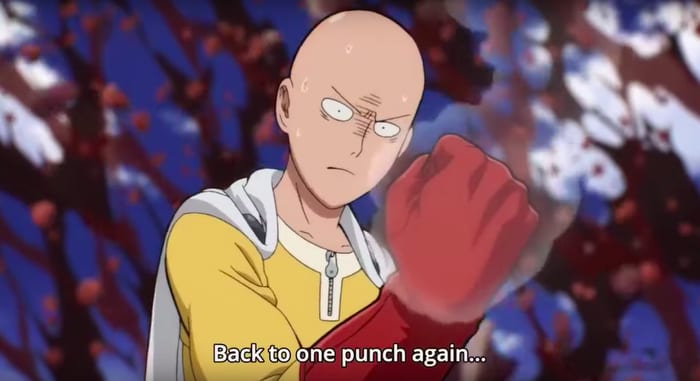 More often than not, the story mode of One Punch Man: A Hero Nobody Knows follows a simple structure.

For hours, players grind up their created character through repetitive fights, trivial activities and fetch quests to gain money and experience. Slowly but surely, they become strong enough, and skilled enough, to take on bigger and badder threats, even being pitted against the worst of the worst in the form of villains from the series proper.

It looks to be a real challenge, finally pushing players to their limits and forcing them to use everything they’ve learned.

Then, Saitama shows up. Players are forced to play as him, and with a single punch, they’re forced to blow that challenge away with no effort.

It’s not exactly a surprise for those who have seen the anime or read the manga the game is based off of. Heck, it shouldn’t even be a surprise for anyone who has seen the title of the game. But it still manages to leave players with a lingering question: What’s the point of playing One Punch Man: A Hero Nobody Knows when the pay-off is taken away so quickly?

Which is a fair point. Nearly every boss, from Vaccine Man to the “indomitable” Boros, are dispatched by Saitama with a single blow, as per the conceit of the show and game. As such, what reason do players even have for going through all of that training, grinding and hard work over all those hours?

It’s frustrating to say the least. And yet, it also conveys a point more clearly than even the anime managed to: Saitama’s power, while useful in the context of keeping the world safe, is a curse, not a blessing.

All of that power, and that lack of a struggle to achieve what one wants, leads to disappointment; not only for Saitama, but for the player. It should have been their fights, their moments of glory, but instead, their enemy is taken out before they can even get the chance to feel anything.

Again, this isn’t a surprise for those who have seen the show or read the manga. But unlike those mediums, One Punch Man: A Hero Nobody Knows forces players to experience that heartbreak like never before. They’re there through all of the struggle, all of the build-up and anticipation of training for and finally finding a challenge, only to have it taken away by a cruel joke.

Which, in its own way, is kind of brilliant.

Where it was easy to laugh at how Saitama blew away opponents in the anime, it’s harder to do so when players take up control of him and are placed in his shoes. It’s harder to laugh when they’re the ones forced to watch that challenge slip away, and receive confirmation that there is no challenge out there they’ll be able to enjoy, and likely never will be.

Is it the best gameplay design? Not at all – it makes the grinding for levels in previous hours feel wasted, and saps the fun out of the experience after the humor of the routine wears off.

That’s kind of the point though. It isn’t fun to be the most powerful being in the world, and to not be able to find a worthy opponent. It’s the journey to become stronger, and to find someone or something that can push back against how far one has come, that makes the whole process worthwhile.

The fact that One Punch Man: A Hero Nobody Knows can convey that so completely, and so much better than other mediums, is most certainly a point in its favor. Even if it isn’t the best game out there, no one can take that away from it, and it’ll stand as a testament to the tragedy One Punch Man’s titular protagonist faces with every new installment in the series.