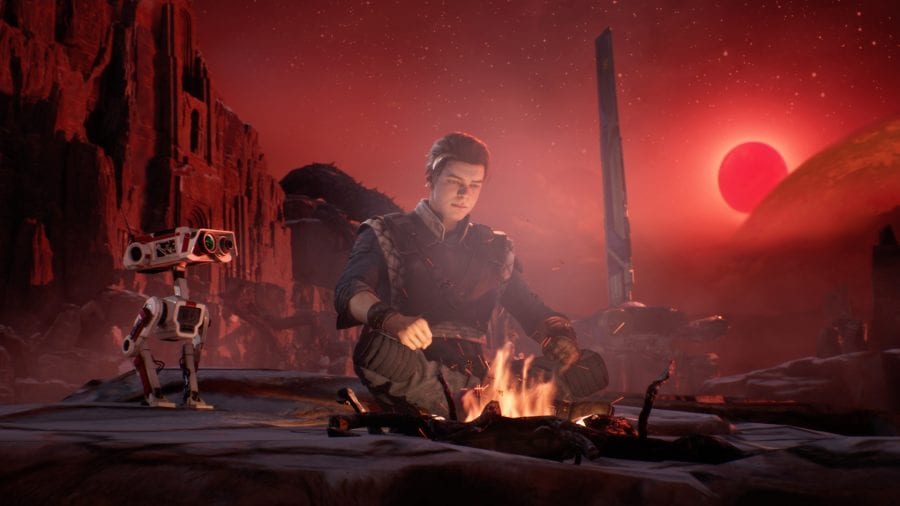 Star Wars Jedi: Fallen Order is an interesting beast. It’s a game that draws a bunch of disparate elements from other titles, but somehow manages to combine them all into something engaging and unique. Chief among those inspirations is Dark Souls, but Fallen Order doesn’t ape the formula entirely. It’s a game that knows what works about Souls-likes, but doesn’t need to emulate it entirely.

Countless other titles have tried to copy that lightning-in-a-bottle Souls formula, but few actually get what makes it work. It’s the sense of exploration, of everything being tied together. A difficult combat system that respects players, and teaches you from your mistakes.

These ideas are at the core of Jedi Fallen Order, especially exploration. Each of the game’s planets are made of inter-weaving paths with loads of shortcuts that can be unlocked, and tons of secrets to find along the way.

Each planet is a joy to explore, poking your way around the alien landscapes of Star Wars. Through environmental storytelling and direct collectibles, each world is also fleshed out to feel very different.

Exploration is also where the game’s Metroidvania inspirations come in, with different obstacles and paths that you’ll need to unlock abilities for.

Lightsaber combat is methodical, using a melee combat system focused around timing, hitboxes, and guarding/parrying. On its face it’s very similar to Dark Souls with its parrying, dodging, unblockable attacks, etc. Yet, this is a Star Wars game and that idea heavily plays into things.

Force abilities like Force Push or lightsaber throw make it feel uniquely Star Wars, and your Force gauge replenishes as you attack enemies.

When you die, you’ll lose a large portion of your experience, but not the entire thing. All you need to do in order to get it back is hit the enemy that killed you, just hit them once. It’s a similar risk-reward system to Dark Souls, but one that’s easier to deal with.

Just like exploration, combat uses the core ideas of Dark Souls but doesn’t want to just do the same thing.

Fallen Order draws from other games, like Uncharted with its climbing and platforming, or even Zelda with a bit of its puzzle-solving. Yet it applies that Star Wars stamp to each and every aspect, looping your Force abilities into every aspect.

It’s clear that Fallen Order also takes cues from other Star Wars games like Force Unleashed and Jedi Academy in terms of the general feel of lightsaber combat. It’s almost staggering how many influences Fallen Order is taking elements from, but like I said before it isn’t content to just be a copy of any of those games.

Jedi Fallen Order wants to be its own thing, despite its inspirations. It has enough similar elements that you could get away with calling it a Souls-like, but it’s so much more. Respawn Entertainment clearly looked at what works best about Dark Souls, and adapted those elements into their own unique vision.