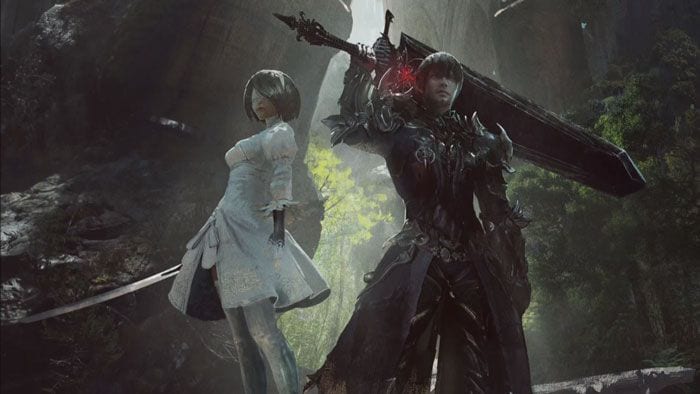 Patch 5.1 for Final Fantasy XIV is finally here, and with it comes the brand new Alliance raid series titled YoRHa: Dark Apocalypse. It’s themed around NieR: Automata, so you can bet that there will be new clothes and gear to collect. Here’s how to get 2B and 9S’ outfits in FFXIV.

How to Get 2B and 9S’ Outfits in FFXIV

First off, there’s one important factor you need to be aware of when trying to get these outfits. It’s possible for both male and female characters to get 2B-themed outfits, but if you want 9S’ stuff, that’s only available for the male characters.

The first way to get the 2B and 9S outfits is by getting your weekly gear drop from the Copied Factory raid.

There are a total of four bosses in the raid, and each boss will drop a treasure for each alliance taking part. This means that each alliance will get a chance to roll for two random pieces of loot: head, chest, arms, legs, and boots.

While the gear itself is separated into the usual categories (fending, scouting, maiming, aiming, casting, healing, and striking) as per usual, all of the gear pieces actually look more or less the same, and the look only varies if your character is male or female.

Just like all current content in FFXIV, you can only get one piece of gear each week from the raid. Once you’ve gotten your loot, you’ll only be able to roll again at the weekly reset on Tuesday.

Thankfully, there is a farm-able way to get the 2B outfit if that’s what you’re looking for. After beating the Copied Factory raid and defeating the final boss, there will be an extra treasure chest that comes with three 2B outfit coffers. These coffers can be rolled on by all 24 people in the raid.

Unlike the regular gear drops, the 2B outfit from the coffer is a level 1 outfit that’s meant for glamour purposes. In addition to that, there’s no weekly lockout on the coffers, and you can run the raid as many times as you within a week to try to roll for it.

How do you get the 2B and 9S outfits in FFXIV?

Only male characters can get the 9S-themed outfits, and the 2B-themed outfits are available for both genders. You can either get the outfits through the weekly loot drops from the Copied Factory raid, or try to get the 2B outfit coffer from the final chest in the raid as many times as you want within the week.

That’s all you need to know about how to get the 2B and 9S outfits in FFXIV. Be sure to search for Twinfinite for more tips and information on patch 5.1 and FFXIV.