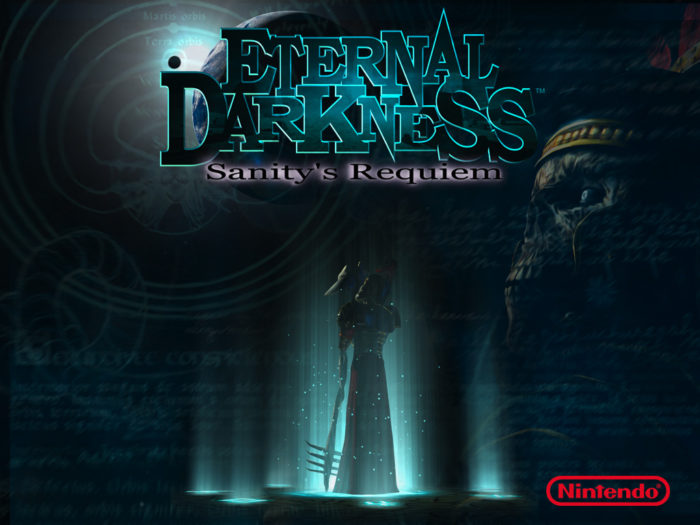 Made by Silicon Knights and released in 2002, Eternal Darkness: Sanity’s Requiem is one of the most unique but unknown and underappreciated games in the horror genre.

If you’ve never heard of it, that’s because the game sold poorly despite being loved by critics and winning multiple awards. It was the first “M” rated game published by Nintendo and is much more of a psychological thriller than survival horror. The game took place in different time periods and had a large cast of playable characters. You had to solve puzzles while dealing with terrifying monsters and other tricks the game tried to throw at you.

Although many people compare Eternal Darkness to Resident Evil, it’s actually much more akin to Silent Hill. Instead of managing limited resources against a horde of zombies, Eternal Darkness likes to mess with the player’s mind. This is done through the sanity system that the game employs.

The sanity effects are what make this game so special. Whenever the character you’re playing as gets spotted by an enemy, your sanity meter goes down. At first, there are only minor effects like the camera angles moving slightly or weird noises being heard.

Once your sanity meter goes down big time though, then you’re in for a wild time.

The game might suddenly freeze for a prolonged amount of time, making you question if you should restart the console or not. The volume icon on your TV could pop up and start to increase dramatically as the game gets loud and louder.

Eternal Darkness will even try to mess with you and stop randomly with a “To Be Continued” screen.

Is the volume on your TV going up, or getting a “To Be Continued” really that scary? Not exactly, but it really keeps the players on their toes and it makes them question what is real or if it’s just the game messing with you.

In spite of how unique, and creative these mechanics are, the original producer has been trying for a long time but to no avail to create a sequel. Imagine what modern technology could do with this concept?

It could do things like pulling up your menu and making you think your Switch keeps going into sleep mode but really, your screen is just dark. Or it could bring up the eShop and act like it’s repurchasing the game digitally for $60.

It could make you think you’re getting constant friend requests, act like the game was deleted and that you need to redownload it and so much more. The possibilities are endless because of the advancements of the video game industry and technology as a whole. There are so many more things Eternal Darkness can mess with in 2019.

You may have noticed above that in correlation to an Eternal Darkness sequel or spiritual successor, only Nintendo has been associated with it.

This is because back when Nintendo first published Eternal Darkness, it trademarked the game and its “Sanity Effects” mechanic and concept. They have contentiously renewed the trademark throughout the years, even as recent as December 2016.

It’s smart for Nintendo to claim such a unique idea, but they have seemingly done nothing with it and it feels like a huge missed opportunity. Especially when you consider that Silent Hill has been pretty… silent over the past few years.

There is no doubt that with all the tools and experience Nintendo has, along with the trademark of such an original idea, they could achieve the same level of horror and uniqueness that has been missing from the psychological horror genre.

Sure the game still stands up well now if you just wanted to experience it as is, but the graphics look pretty dated which is a result of it originally being a N64 game which was then remade for the GameCube.

Another issue with it being an older game is that some of the tricks it tries to play on you via the sanity meter are kind of obvious since the developers intended people to play on a CRT TV.

When you see volume going up and the game getting louder, you aren’t exactly jumping to turn your TV down because the volume bar looks like an old CRT volume bar.

If the sanity effects were tied directly to the Switch hardware and modern TVs, then the game would be a lot scarier. It would keep the player more invested in the atmosphere of doubt that the game tries so hard to portray.

Eternal Darkness has still managed to be regarded as one of the most underappreciated horror games in the entire industry and for good reason.

Its mechanics and concepts were something that hadn’t been done at the time, and since it’s trademarked, we haven’t really seen since.

Although the game didn’t initially sell well, a sequel/spiritual successor is desperately needed, especially since the horror genre has been on such an up-rise the past few years. Eternal Darkness? More like “Eternally Underappreciated.”