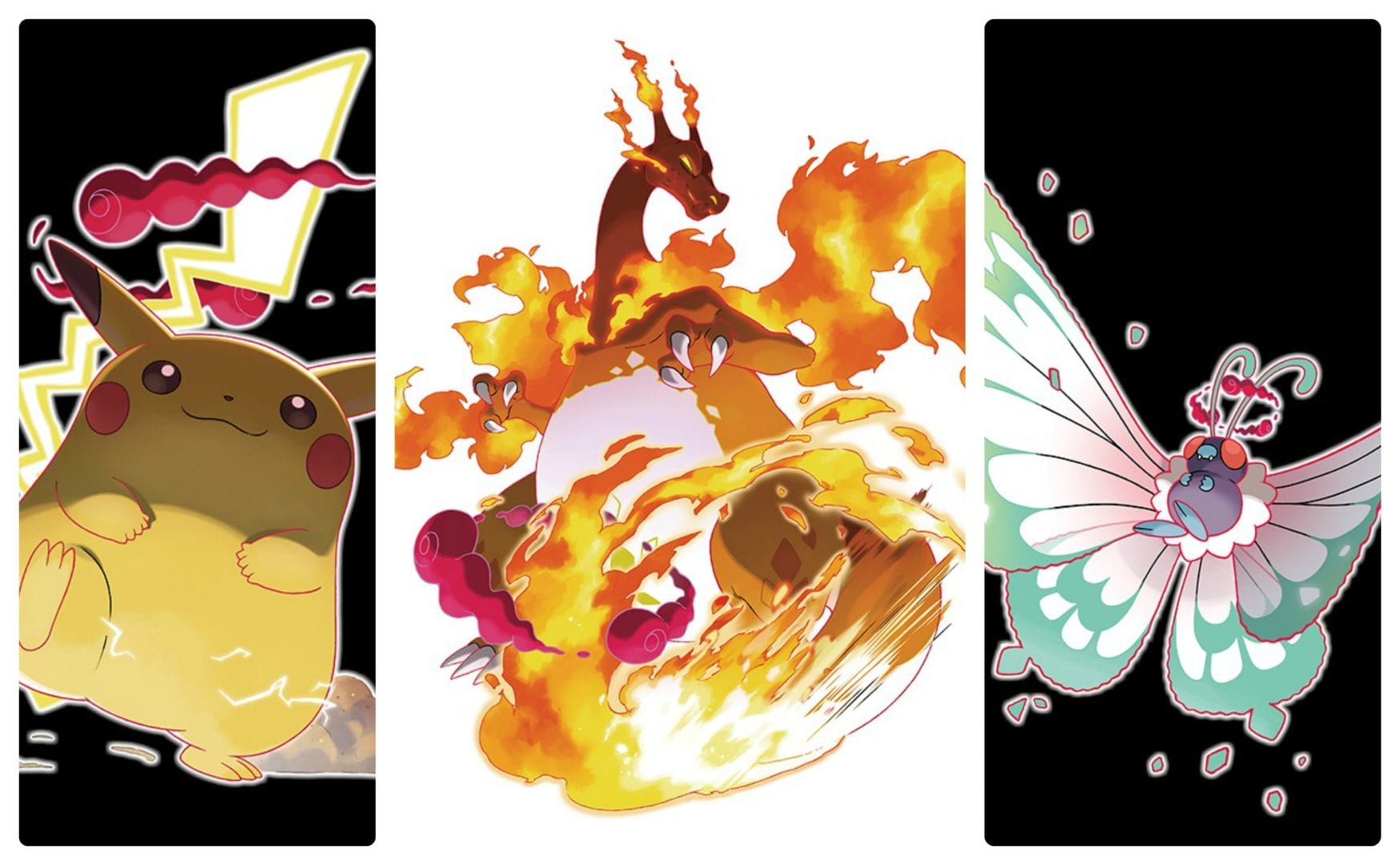 Just earlier today, The Pokemon Company and Game Freak released a brand-new trailer for the upcoming pair of Switch JRPG’s, Pokemon Sword and Pokemon Shield. The trailer, which you can watch below, showcased several new Gigantamax forms for existing Pokemon such as Pikachu and Charizard.

Gigantamaxing is a new feature for the Galar region in Sword and Shield and it essentially allows a Pokemon to transform into a colossal giant, changing its shape, appearance, and stats, but it can only be used once per battle and not every Pokemon has the ability to do it.

In a press release from The Pokemon Company, they released dozens of new screenshots and key art for these new Gigantamax forms and they also revealed info on each one, which you can check out below.

The electricity generated in the sacs in its cheeks is stored in its tail. In battle, it will strike opponents with its tail and send a jolt of electricity through them as great as any lightning strike.

Gigantamax Pikachu has become so powerful that it can produce enough electricity to rival a power plant. However, using this electricity to help power people’s homes seems difficult, as Pikachu can only remain Gigantamaxed for a short time.

Electric-type attacks used by Gigantamax Pikachu will change to G-Max Volt Crash, which not only deals damage but also paralyzes all opponents.

Trainers that have play records from Pokémon: Let’s Go, Pikachu! on their Nintendo Switch system will be able to receive a special Pikachu that can Gigantamax in Pokémon Sword and Pokémon Shield.

The flames inside its body have become stronger, and now fire erupts from its mouth and horns in addition to its tail. It seems that the strength of the flames increases when Gigantamax Charizard roars. Charizard’s flames have become enhanced with Gigantamax power and now form wings on its back.

These wings are hotter than magma, and Charizard can fire them off to scorch its opponents. Fire-type attacks used by Gigantamax Charizard will change to G-Max Wildfire. G-Max Wildfire doesn’t just deal damage to an opponent when it hits—it will also continue to deal damage for four turns to any Pokémon that isn’t Fire type.

The fur around its neck has become extra fluffy and luxurious thanks to Gigantamax power. Any opponent caught in this fur becomes enamored with Eevee and loses the will to fight.

Gigantamaxing has caused Eevee to become more rambunctious than ever, and it will attempt to play with any opponent. However, it often ends up crushing its opponent due to its massive size.

Normal-type attacks used by Gigantamax Eevee will change to G-Max Cuddle. G-Max Cuddle doesn’t only deal damage when it hits—any opponent that is the opposite gender of Eevee will become infatuated.

Trainers that have play records from Pokémon: Let’s Go, Eevee! on their Nintendo Switch system will be able to receive a special Eevee that can Gigantamax in Pokémon Sword and Pokémon Shield.

Gigantamaxing has caused Meowth’s body to stretch to astounding lengths, and the coin on its head has also become massive. The giant coin can emit a torrent of Gigantamax power, filling the surrounding area with a powerful golden gleam.

Meowth loves shiny objects, and when it sees skyscrapers lined with glass, it won’t be able to resist the urge to sharpen its claws on them. This behavior can cause considerable damage, such as wearing down the exterior walls and breaking windows.

This special Meowth that can Gigantamax can be received as an early-purchase bonus for Pokémon Sword and Pokémon Shield by selecting the Get via Internet option in Mystery Gift from Friday, November 15, 2019, to Wednesday, January 15, 2020.

Its most notable feature is its blinding wings, which have grown to gigantic proportions. The light of Gigantamax Butterfree’s wings comes from its scales, which can inflict paralysis, poisoning, or sleep on its opponents.

These scales are Butterfree’s most effective weapons. Its vast wings can stir up a wind strong enough to lift a 10-ton truck, just by flapping. This wind also scatters poisonous scales around the area, so simply being near this Pokémon is very dangerous.

Bug-type attacks used by Gigantamax Butterfree will change to G-Max Befuddle. G-Max Befuddle doesn’t only deal damage—it will also scatter scales around opponents and cause them to become poisoned, become paralyzed, or fall asleep.

Pokemon Sword and Shield are set to launch for the Nintendo Switch as an exclusive on Nov. 15, 2019. In other Pokemon news, there was a 24-hour forest livestream that revealed a new Galarian form of Ponyta and we just learned the other day just how big the file size is for these RPGs.