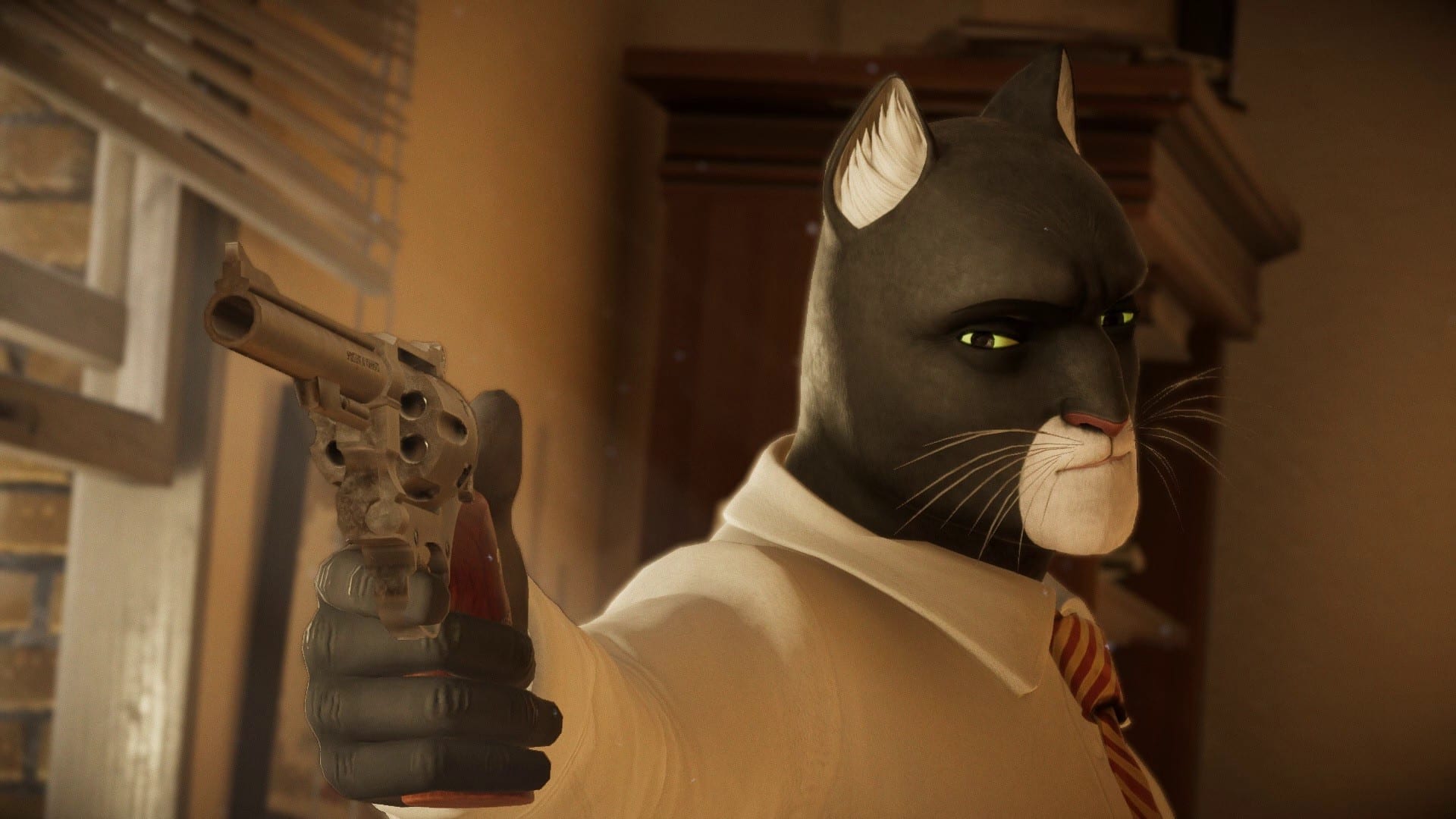 If you’re like me, the closing of the famous Telltale Games left a huge hole in your chest, and the current gaming market features far too few narrative, decision-heavy visual novel titles that beg for repeated playthroughs. However, one indie light on the horizon could potentially fill the void: Blacksad: Under the Skin. I got to play the game’s demo during New York Comic Con, which was pretty dang good and should scratch that Telltale itch, but it wasn’t perfect. Then again, what game is? Editor’s note: This game.

If you never heard of Blacksad, you’re not alone. Before Microids contacted me, I had little knowledge of the game or its source material, a Spanish series of comics that star the titular Blacksad. Then again, I never heard of Sam and Max before I played the Telltale games of the same name.

As you can probably tell by the pictures in this article, Blacksad is a hardboiled detective in an alternate world where everyone’s an anthropomorphic animal. This design gives the game a gritty, The Maltese Falcon meets Zootopia vibe.

Right off the bat, every character hit the mark for me, from Blacksad and his wit that’s almost as sharp as his sense of smell, to side characters like a rhinoceros who is a tough guy until he realizes his marriage is about to collapse. You might assume their anthropomorphic natures detract from the game’s tone, but if anything, their animal traits accentuate their charm.

However, your mileage might vary with Blacksad himself depending on your love of the hard-boiled detective trope. Do you enjoy characters who deliver inner monologues and dry, chuckleworthy quips? Do you love protagonists who speak in a deadpan, almost Geralt-like manner? If not, then Blacksad: Under the Skin isn’t for you since that’s around 80% of the game’s dialogue, but if you love these traits, continue reading because I have a hunch this alley cat is right for you.

Blacksad: Under the Skin is best described as a tapestry of Telltale Games’ greatest strengths, even though it’s developed by Pendulo Studios and YS Interactive. The game weaves the choice-heavy narrative style of games like The Wolf Among Us with puzzles that, while not as involved as those from Monkey Island, are a cut above the “puzzles” in Telltale’s later titles.

Blacksad: Under the Skin’s puzzles were a healthy mix of performing semi-actual gumshoe work and obsessively interacting with everything like a rabbit with ADD. Actually, calling them puzzles is a bit of a misnomer; think of them as mini-scavenger hunts for clues to help solve a case, as well as items that help you search for clues.

Since actual detective work is far more complicated than most of us can fathom, Blacksad: Under the Skin threw me a bone and recorded everything I found in either an in-game journal or a menu I like to call Blacksad’s Train of Thought. Of course, I still had to find clues, whether from chatting with a waitress or following a trail of footprints, but whenever I found the info, the game jotted it down for me.

If I found an interesting tidbit of information that isn’t crucial to the case, such as a man (lynx, actually) likes to play the sax, it went in the journal; if it’s important, it was thrown in the Train of Thought pile. Sadly, Blacksad: Under the Skin didn’t let me personally sort through the info and automatically sifted it into one category or the other, which was a missed opportunity.

On one hand, this system didn’t let me feel like a detective, but on the other hand, combing through all the info the game threw at me would have been tedious and boring.

While I didn’t progress far enough into the demo to effectively use Blacksad’s Train of Thought, I would have used it to determine which important clues go together in the final release. If I’m correct, then the Train of Thought is a clever mechanic that should force gamers to think and walk through the clues like a real detective (or at the very least a lawyer). However, from what I saw, the game didn’t penalize me for linking incorrect clues.

While I would have loved the ability to come to the wrong conclusion —or at least hear some Blacksad snark if I linked incorrect clues — such a feature would probably derail the game’s narrative, which is a death sentence for games like this one.

On the subject of Blacksad: Under the Skin’s narrative, I enjoyed what I experienced. The game featured a suicide/mysterious disappearance story that, if I know my film noir genre, would probably expand into an entangled web of plot twists, figurative and literal backstabs, and enough inner monologues to fill a book.

The demo featured plenty of explorable locations, each packed with ambiance that nailed the noir charm, even during the day. The locations were relatively small, but since Blacksad walked at a sloth’s pace, the areas felt larger than they actually were.

Actually, the more I think about it, the more I dislike Blacksad’s walking pace. By the halfway mark, his gait started to grate on me, especially because I had to walk between areas to search for clues —a feature I’ve ironically been dying to see in a modern Telltale Games title. I know Blacksad: Under the Skin is supposed to be a slow game, but without the ability to run, the game felt slower than it needed to be.

As for combat, it was almost identical to combat in other choice-centric, narrative titles: follow the on-screen prompts to not die. It’s a simple system that works for Under the Skin’s style of game, and it ain’t broke, so why fix it?

Since I played an early build of Blacksad: Under the Skin for the demo, my experience was far from flawless. I witnessed a slew of glitches and bugs, including voices that cut out mid-sentence, a floating pen or two, and so many missing sounds that at times, I felt like I was watching a silent movie.

And then there was the “empty” diner that seemed like a busy, bustling restaurant because of its ambient sounds. Was that a glitch or a mistake on the sound editor’s part?

When I played the demo, I had no idea I could use Blacksad’s feline senses to detect clues until I saw a confusing conversation option that consisted of Blacksad’s face instead of the usual words. Plus, the demo never hinted at the existence Blacksad’s Train of Thought; I discovered it purely by accident, which is less than ideal. With any luck, the full release will include a tutorial.

However, no matter what glitch or problem Blacksad: Under the Skin threw my way, I always looked forward to the next story beat. The various glitches and the long and lonely treks down musicless streets were nothing compared to the excitement I felt knowing the next hardboiled plot twist was just around the corner.