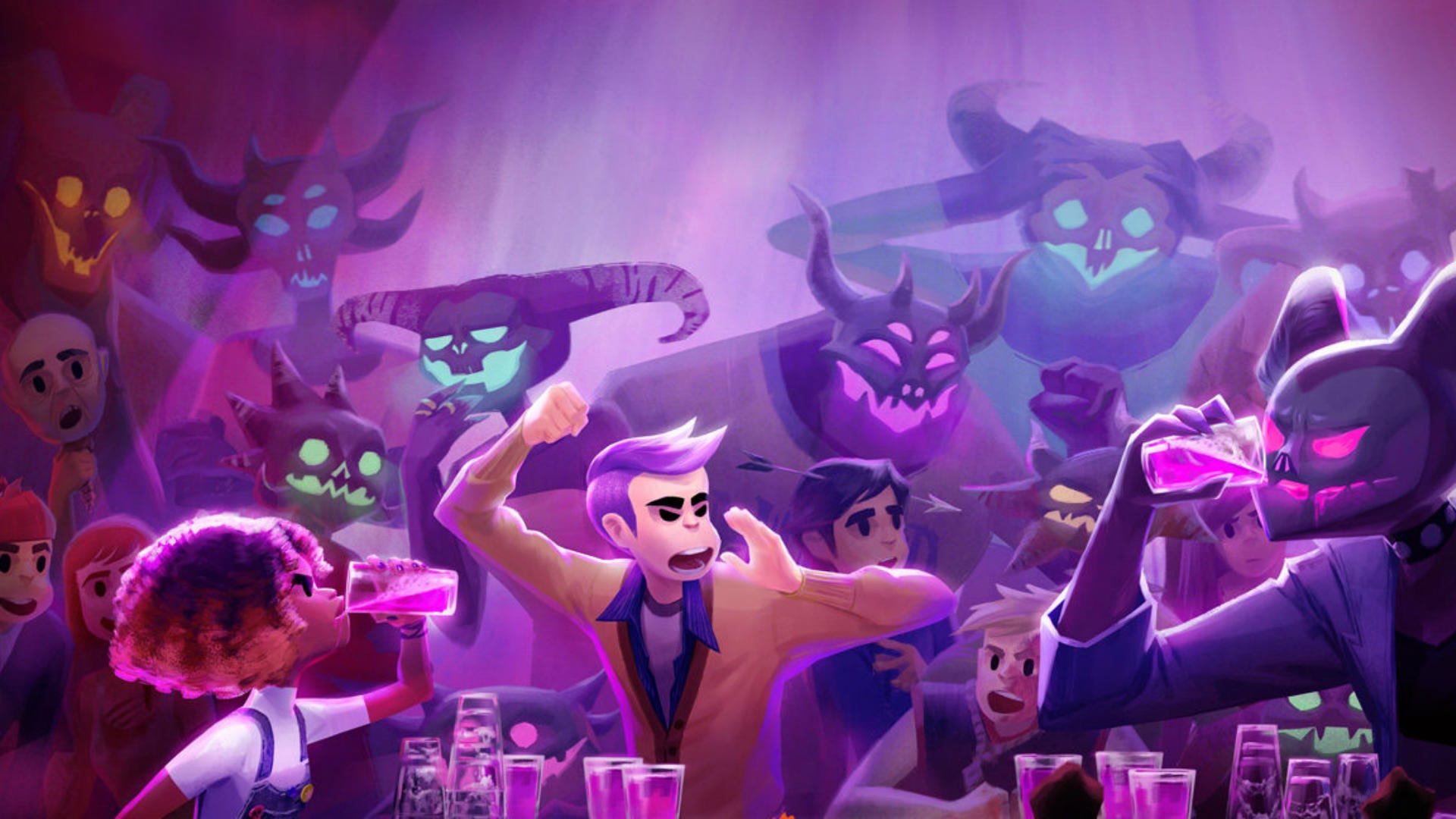 Like many, Oxenfree surprised the hell out of me in 2016, as Night School Studio’s debut title surpassed expectations with its moving story and clever gameplay mechanics. As such, Afterparty has been on my shortlist ever since it was announced, especially considering the absurdity of its premise.

Afterparty centers around two students, Lola and Milo, just about to graduate college. Like many, these two anxious souls aren’t too eager to find out what awaits them after graduation, as the prospect of the real world, jobs, and everything else seems like hell.

From the small bits of social interaction Lola and Milo have at the introductory party, it is plain to see they are slightly different. Milo has trouble making friends and talking to people, while Lola is brazen and a bit antisocial herself.

Even with some liquid courage in them, conversations always come back to the fact that these two are outcasts and really only have each other.

Despite this, the main characters come off as relatable nerds thanks to clever writing, supported by quality voice work from Janina Gavankar (Lola) and Khoi Dao (Milo).

The writing and voice work in general throughout Afterparty is a delight. Everyone from important side characters to background roles each have their own unique personalities that serve the environment and story, all of which span from the game’s over the top dialogue.

While college and small talk are terrifying, it isn’t long before Lola and Milo realize what true hell is, as it is revealed the two have actually died and been transported to the evil section of the afterlife.

As soon as the landscape of Afterparty’s setting makes its debut, it’s clear that this isn’t the eternal damnation that is talked about in the bible.

Though the torture and demons are still present, the game’s take on Hell is odd and modern. In what can only be described as a millennial version of things, demons and humans alike complain about the mundanity of day to day operations over a drink at the bar to round out each day.

“It’s a job. No one really wants to be doing what they’re doing,” says demon bartender Father Van Dyke. “When your shift is over, you drink with whatever dingaling is in front of you.”

That is pretty much every character’s attitude in the game, as they are just trying to get through things one day at a time.

While the nature of the writing may not work for everyone, possibly coming off as too “try hard”, the subject matter resonated with me and was pretty hilarious. Even throwaway lines or something as simple as a demon falling down from overdrinking had me in stitches.

While the jump in maturity – and immaturity – is a stark contrast to that of Oxenfree, it works because the comedy and overall themes of the game are still similar. Gameplay also revolves around conversation and the narrative in Afterparty, with the drinking system being the focal point instead of the radio in the previous title.

Depending on what drink you order, extra lines of dialogue open up, making for a large array of choices in which to respond to certain situations.

As the game goes on, it is clear that some of the drinks, and the dialogue that comes along with it, don’t really fit. Many feel cobbled together, existing merely as an excuse to add more absurdity.

An example of this can be found when interacting with a bunch of demon lawyers midway through the plot. One of the alcohol choices is a mixed drink that makes Lola and Milo talk like vaudevillians, old-timey theatrical characters that sound as out of place as their name suggests.

What use are 18th-century theatrical accents and dialogue going to have in a conversation with millennial lawyers? Not much, as they’ll just continue what they are saying, basically ignoring Lola or Milo’s input.

This wouldn’t be that much of a problem if the choices resulted in different outcomes. Instead, not only do drinks not have a lock and key purpose but they also sometimes take away from the role-playing element of situations when they don’t make sense.

When it comes down to the overall story and its branching narratives, this statement also rings true.

Even though there were a couple of different paths to take that resulted in distinct situations, the throughline of the narrative is still pretty linear.

Since the plot and its characters are so strong, this isn’t a terrible thing but it doesn’t support the feeling that the game will be drastically different when replaying it. Choice really comes down to A or B scenarios that lead back to the main plot regardless.

Maybe chalk it up to high expectations of its premise or the bar that was set previously by Oxenfree, but Afterparty just leaves a lot of potential on the table.

I’ve no doubt that many that loved Oxenfree will also be on board for this ride to hell, as its setting, characters, and dialogue are enough to warrant a playthrough for anyone who likes a narrative focus. At the end of the day though, Afterparty will leave many with a bit of a hangover, wondering if there was more that could have been done with the drinking system and its branching narrative.

Should You Buy Afterparty?

Anyone who enjoyed the style and premise of Oxenfree and doesn’t mind a bit lewder and vulgar themes will love a quick playthrough of Afterparty.

Afterparty will be available Oct. 29, 2019, for Microsoft Windows, Nintendo Switch, PlayStation 4, and Xbox One.

Night School Studio is an indie development team based in Glendale, California. Their debut title was the smash hit indie title Oxenfree, which released in 2016.