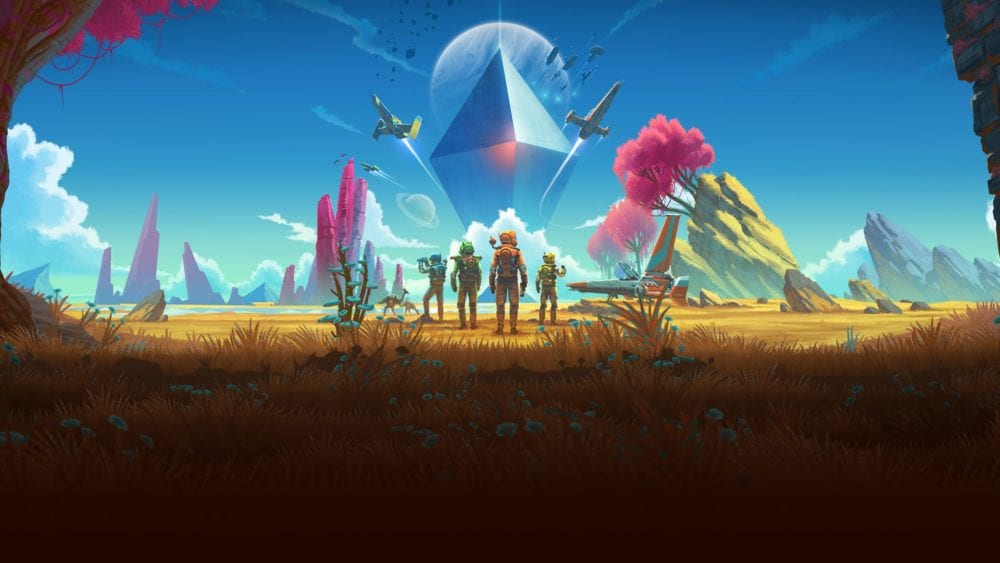 Hello Games is on a mission to improve No Man’s Sky, going above and beyond to entice players to try out their action-adventure survival game with free, extensive DLC. While the Next update certainly changed a lot of minds on the title, No Man’s Sky Beyond looks to be even more impressive.

With changes ranging from how players interact with the world to what they can create in it, No Man’s Sky Beyond takes the redeemed title beyond even what was initially promised but left undelivered.

In a game where you can do anything and go anywhere, the only logical answer to “what would be the first thing players would want to do in No Man’s Sky?” should always have been riding an alien.

With No Man’s Sky Beyond, dreams will finally come true, as the update is set to introduce the ability to not only tame creatures but ride them as well.

Whether it is biped or even crab-like aliens, players will never have to walk across the terrain of a planet again. Instead, they can simply call on one of their trusty steeds to transport them throughout the world.

Multiplayer has been a hot button issue for No Man’s Sky for a while – as fans were outraged that the game didn’t have it upon its release, despite it seemingly being advertised.

In No Man’s Sky Beyond, Hello Games looks to deliver multiplayer that provides a fun experience for friends and enriches the world at the same time.

While he wouldn’t define it as massive, creator Sean Murray stated to Eurogamer that the online component of the update is a big feature.

“I was trying to think of a word that’s not massively multiplayer, I think that draws a lot of genre connotations that I don’t want, and I don’t think we deliver on,” said Murray. “But you can go anywhere and bump into people.”

Thanks to the implementation of community missions and a social hub, it is possible to run into upwards of 16 to 32 people throughout the world.

With the addition of Virtual Reality, No Man’s Sky Beyond brings us one step closer to getting to experience space life first hand.

While there are plenty of obvious benefits to playing the game in Virtual Reality, including seeing the beauty of its worlds from a first-person perspective, it’s the small, but immersive features that make the game’s VR feel one of a kind.

An example of this can be found in the form of intuitive translations, as turning on the analyzer mode and reading text translates it. Interacting with objects is also as simple, merely requiring you to reach for and grab it with the PSVR’s triggers.

No Man’s Sky VR also overlaps with the aforementioned multiplayer as well, meaning you get to enjoy this unique adventure in first-person with friends too.

No matter its faults, No Man’s Sky has always been a beautiful game.

Whether it is the procedurally generated worlds or the vastness of space travel, there is plenty of lovely landscapes and imagery to behold throughout the game.

Despite its beauty, one of the core complaints regarding the terrain is that it is all a bit samey. For the most part, each world features biomes that use similar designs throughout, instead of a world filled with a handful of distinct areas.

No Man’s Sky Beyond looks to solve the repetitive look of things by diversifying the biomes that can be found on each planet.

From dense jungles to open terrains to underwater cities, the scenery on display in the trailers for Beyond alone is enough to take your breath away.

Each of the new biomes is also set to contain unique ingredients that players can use for crafting, cooking, and other important creative things in the game.

It wouldn’t be No Man’s Sky if the Beyond update didn’t add a boatload of new and improved ways players could create and craft, now would it?

One of the most exciting new creation features coming to the game fundamentally changes how base-building works.

Thanks to the addition of electric power and computers, players will now be able to create industrial-style bases all on their own. With these items, bases can now be crafted to be almost entirely motorized and automatic systems.

Plenty of quality of life elements will also be brought to the game, including sitting in chairs, cooking and recipes, and even the ability to milk space animals.

It is time to free the NPCs (non-playable characters) of No Man’s Sky. No longer will NPCs be confined to fester in the same spot, simply waiting for a player to visit to give their life meaning.

With Beyond, NPCs will have far more freedom to roam with the world of No Man’s Sky, as players can encounter them strewn throughout planet surfaces.

While it may seem like a small thing, roaming non-playable characters is another change to the game that helps make the world feel less rigid and more alive.

Alongside give NPCs a little bit more agency, the update is also going to introduce a handful of fresh faces, creating all-new NPC races to interact with.