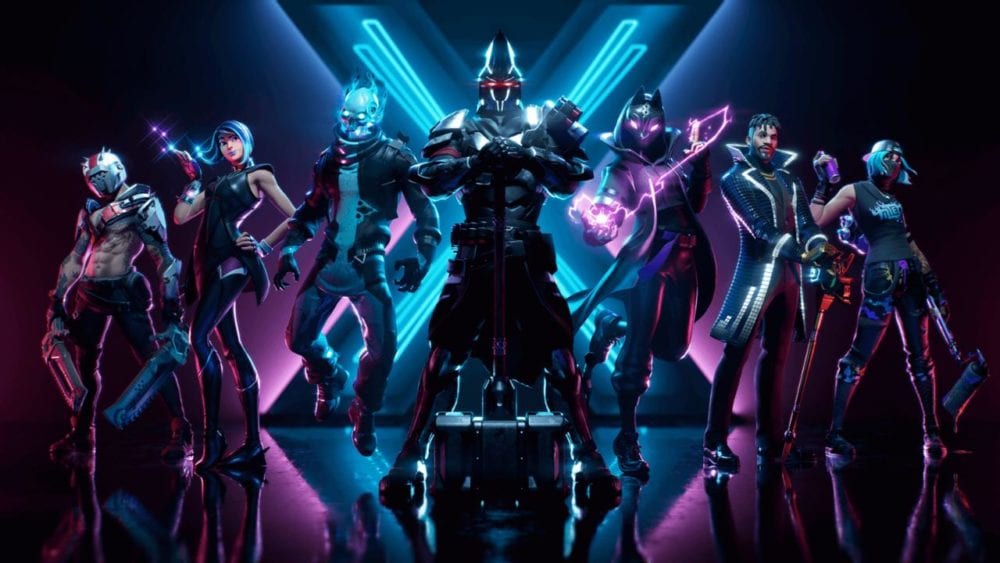 Fortnite Season 10 is here at last, bringing with it yet more tweaks to the map, skins, weapons, “missions,” and crazy mech vehicles all dressed up in a sweet new battle pass. With Fortnite X, as they’re calling it, the theme this time around is something of a mashup that’s both new and familiar at the same time.

“Out of Time” is the official theme description, alluding to a sort of time warp that mixes the old and new. Here we’ll be breaking down everything that’s new about Fortnite season 10, so strap in.

The changes to Fornite’s map in season 10 aren’t quite as drastic as they were last time around. There’s not too much in the way of massive overhauls and new areas, but one or two old favorites do return and there’s some smaller stuff to keep your eye out for.

Dusty Depot is back! No longer the smoldering hole that was Dusty Divot as a result of the comet’s impact, the central location has apparently been rebuilt and looks as good as new.

There are a few warehouses in the area now, as well as a reboot van that you can use to bring friends back to life. Also, the Brute mechs (which we’ll detail later) spawn in this location.

However, a lingering frozen comet that threatens to once again crush the area also returns to the sky, which hovers above the map and can actually be visited. You can either drop onto the comet or build your way up and explore its interior. There’s a chest or two to be found if you do.

Loot Lake houses the gravity orb that seems to be cause of everything funky in Season 10. If you get close enough you’ll notice that gravity changes and you’re able to float around. We’re expecting this to form part of a narrative throughout the season, especially since it appears to be expanding.

Elsewhere, a Stone Head Statue and Durr Burger Head are back, though that seems like little more than a cool throwback to prior seasons. There doesn’t appear to be any function to it.

Also, the monster skeleton –the one with the sword in its head– remains from the previous season, though now it’s bleeding a pink goo all over the place. Perhaps it’ll come to life later in the season?

Rift Zones return to Season 10, meaning that points of interest on the map are likely to change more frequently. Whereas in some seasons map changes have been tied to major events and therefore occurred only once or twice, we’re expecting the addition of the Rift Zones to change things up much more often.

There’s already rumors of some sort of Wild West Ghost Town to be added moving forward.

Despite the fact that vehicles haven’t always gone down well with Fortnite fans in the past, Epic has added a new one this season. Called the B.R.U.T.E mech, it’s a mech operated by two players, with one driving and other shooting its weapons. As you’d imagine, it’s kinda OP.

The driver has the ability to “dash” into combat and stomp enemies and structure into the ground. It can also Super Jump high into the air.

As for the passenger operating the weaponry, they’ll have a shotgun and missile launcher at their disposal. If that wasn’t enough, the mech also has an “Overshield” function which allows it to consume 200 of any material to create a personal shield for five seconds that protects the vehicle.

From the patch notes, we’ll list below the damage stats:

Fortnite’s Challenges have been replaced by Missions, which are essentially the same thing. Just as with the old Challenges, Missions will be released each week and will be based on a series of thematic objectives. Completing these will reward you with Battle Stars, XP, and exclusive cosmetic items.

As we’ve explained in our more detailed post specifically about Missions, the first theme is called Rumble Royale.

As is the case every season, Epic Games will vault certain weapons and items if they don’t fit with the overall meta. This season has seen quite a few vaulted, and there aren’t any new items or weapons to speak of.

The full list of vaulted weapons is as follows:

There’s no way to know for sure whether any of these weapons will come back, but Epic has been known to bring weapons out of the vault during a season. If they do, though, you can be sure their stats will have been tweaked accordingly just to keep everything balanced.