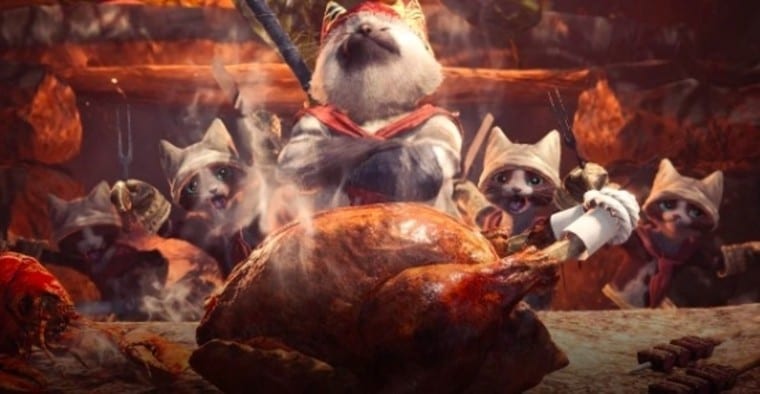 Monster Hunter: World is all about tracking huge monsters and wyverns to then take them down and carve their bodies for meat and precious crafting materials. These hunts can take a great deal of energy from your hunter which is where the canteen comes in.

By going to the canteen, you can choose from a variety of delicious meals and recipes that can buff up your hunter and fellow Palico with stat boosts and special abilities.

We’ve seen people replicate these meals from the game and bring ’em out into the real world, but this Reddit user really went all out to surprise their partner on their birthday.

Stephanie Crilly, who goes by Dreyrugr_andlat on Reddit, posted a photo today to show off one of the best birthday gifts you can possibly give someone.

To celebrate the birthday of her loved one and their love for the franchise, she went out of the way to create a Monster Hunter-themed feast full of tasty entrees that looks pretty spot-on when you compare it to the actual food from the game.

She got plenty of skewers with different kinds of meat and shrimp, went out to the backyard to find big leaves that act as plates, and she even blindfolded her partner, sat him down, and played the Meowscular chef cooking music tune that plays when you eat a meal in MHW –talk about dedication.

Since posting it to Reddit, Stephanie has received nothing but positive attention as the post has gotten almost 2000 upvotes and 100 comments.

She and her partner have been obsessed with Monster Hunter: World ever since it launched back in January of 2018 and has put over 500 hours into the massive action-RPG.

Playing this newest entry has even prompted her to jump into the older games of the franchise, like Freedom Unite on the PSP.

Since she knew that her partner loved the game as much as herself, she thought she would do something unique and special for him that wasn’t just a t-shirt or something.

You can see images down below of the fantastic feast that she threw together. If you want to check out the original post on Reddit, you can see it right here.