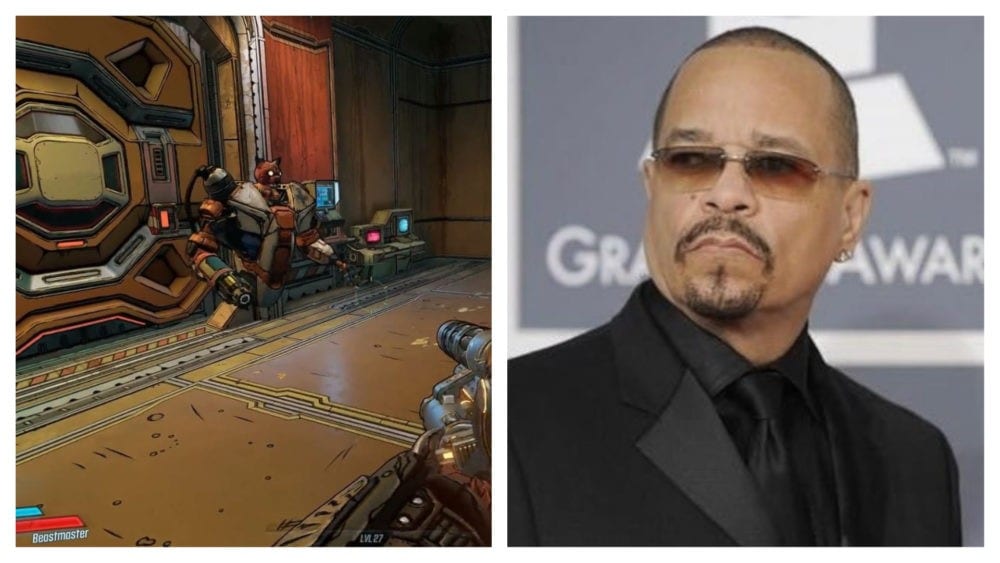 Although it was kind of hinted it, Ice T’s cameo in Borderlands 3 was a pleasant surprise when we demo’d the upcoming looter-shooter last week.

While I’m just a shade too young to have appreciated Ice T’s music career while it was taking off, I do love his character in Law and Order: SVU and his Twitter presence as the leader of the FLTG is all-around extremely entertaining.

For those that aren’t aware, Ice T is a big fan of video games and has credited voice acting roles in Gears of War 3 and Grand Theft Auto: San Andreas. He’s a big time fan of the Call of Duty games, and also enjoys other looter-shooters like The Division and Destiny 2.

Thus, his voice appearing in Borderlands 3 shouldn’t come as a major shock to anyone who has been paying attention to Ice T’s online and gaming presence over the years.

I spoke to Borderlands 3 co-lead writers Danny Homan and Sam Winkler at the preview event and I obviously I had to ask about who reached out to who, and what it was like working with Ice T. Below is a snippet of our conversation.

Note: from this point on there’s going to some information discussed about the character that Ice T voices in Borderlands 3. Nothing over the top, but this is your spoiler warning in case you’re completely adverse to it.

Ed McGlone: So what’s the deal with Ice T in Borderlands 3, how did that happen?

Danny Homan: He was a big fan of Borderlands…I mean that was the thing, like he just authentically loves Borderlands.

Ed: Who reached out to who?

Winkler: We reached out to him. We wanted to make sure that it wasn’t just: you shoot in enemy named like Cryo-T or something like that. [laughs] We felt bad [it would be] kind of insulting.

So we had this character Balex that you know… It was a funny pitch on its own of like two AI that have a bad breakup and so the ship crashes. But once we got iced tea and of that in that role… it just kind of wrote itself man.

Yeah, he and Randy know each other and so they just started chatting.

Homan: I’m glad that particular mission was the one he was involved with because during a recording session he just kept on stopping being like “What the hell is happening? “What is in the water down there? What are you guys doing?” [laughs]

Winkler: Yeah tons of fun to work with and Balex… he’s really cool. He ends up sticking around.

In Borderlands 3, Ice T voices Balex a AI that has been implanted in a cuddly teddy bear against its will. The main quest will eventually lead to where Balex and his vengeful AI ex-girlfriend crash land and you’ll have to help each other out.

Borderlands 3 will release on Sept. 13 for PS4, Xbox One and Windows PCs. You can check out our extended hands-on preview here if you you’re itching to learn as much as you can prior to release.