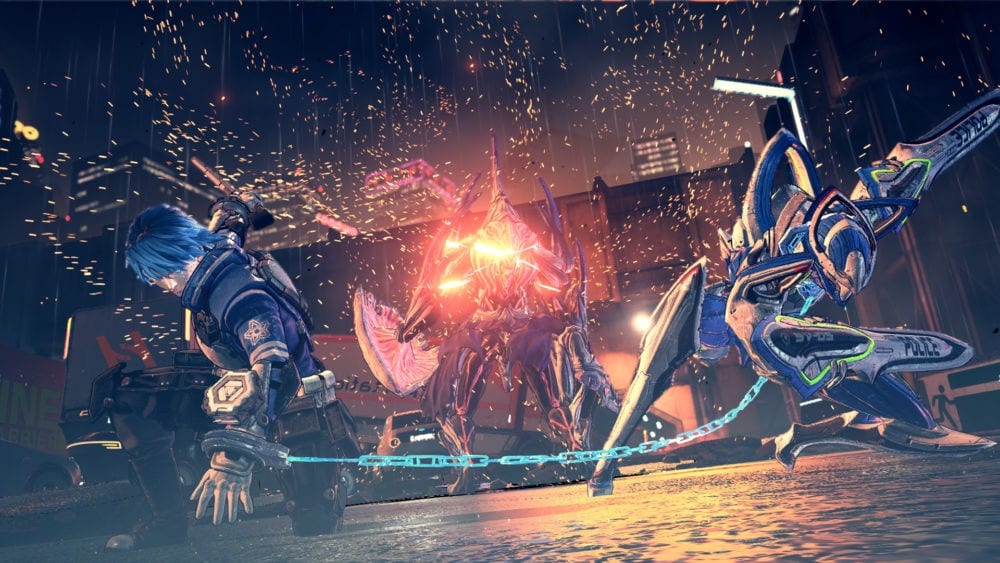 Astral Chain is an assault on the senses in every sense of the word, but I mean that in the most endearing way possible. I consider myself a fan of Platinum Games, so I’ve been anticipating the release of Astral Chain, although a bit cautiously. Six hours of straight gameplay later after booting up Astral Chain, it might be one of the very best games Platinum has ever made.

Astral Chain takes place in a world where humanity has been driven to the brink of extinction, by a mysterious race of creatures from another dimension called Chimera. Humanity now lives in a metropolis haven called Ark, and you play as one of the members of the city’s police force, along with your twin.

Astral Chain is quick to drop you right into the action with an explosive opening, immediately introducing you to the serious threat the Chimera pose to humanity.

I don’t want to spoil the opening moments of the game, so instead I’m going to jump right into the thing everyone cares about with Platinum: the combat, and hoo boy it sure is something.

Astral Chain’s combat is simple enough on its face. You have multiple weapons you can switch between, starting with a close-range police baton and a long-range handgun. You can launch into a combo by repeatedly hitting ZR, and there’s a dodging system that feels very similar to NieR: Automata or Bayonetta, that encourages perfect timing.

Things get very complex, however, when you factor in the game’s main conceit, the Legion. Legions are Chimera captured by the Astral Chain that functions as your partner in battle, and they add some serious depth to combat.

Legions are mapped to ZR letting you summon them at will. They’ll attack enemies near them automatically, but you can move the Legion around the battlefield by holding down ZR and using the right stick. This still lets you move your own character and attack at the same time.

There are some brilliant functions that your Legion give you as well, adding even more complexity. By moving your Legion around an enemy you can wrap the Astral Chain around them, and if you complete a whole circle you’ll momentarily bind the enemy in place. You’ll also use this at certain points in the game to capture runaway criminals, you are a member of the police after all.

At the same time, if an enemy charges, you can catch them in your chain by moving your Legion to the opposite side, thereby throwing the enemy back and stunning them.

On top of all this, you can equip your Legion with different skills, for example, I have one that makes multiple blades spin around my Legion and damage enemies. Each Legion also has their own unique ability mapped to L, with your first one, the Blade Legion, having the ability to slash in a specific direction.

Interestingly, this skill works almost exactly like the slashing mechanic in Metal Gear Rising, and it’s a brilliant reuse of a mechanic that I’ve always wanted to see more of. The next Legion I unlocked, the Archer, gave me the ability to aim and shoot arrows from a range.

While I’ve only unlocked the first two Legions, the Blade and Archer play totally differently, and you need each one in certain puzzle elements and battles. You can swap between them on the fly, however, allowing for a seriously huge amount of option in battle.

I mean it in all sincerity that this is some of the most fun I’ve had with combat in a Platinum game in a long time, and they’ve done some fantastic stuff lately. The ability to control your Legion separately, and the options that gives you, is a complete game-changer.

It certainly helps that Astral Chain sports an absurdly gorgeous anime-inspired art style; one that constantly barrages you with explosions, blazes of particle effects, flashing neon lights, and more. Astral Chain is clearly inspired by Cyberpunk media, and while it doesn’t explicitly broadcast Cyberpunk themes, the general feel and design of the world matches the genre.

While you are a member of the Police, a program called IRIS gives you an unnerving amount of info on Ark and its residents, to a bit of a dystopian degree. Outside of battle, you have to use IRIS to investigate crime scenes and areas, finding clues and hints on what to do next.

The game does have investigation sequences where you’ll need to talk to residents and piece together information, then complete a simple sequence where you put said information together. Astral Chain is separated into different “Files” that essentially function as chapters.

At the start of each File you’ll start in the Neuron task force center, at the bottom of the police station. Here you can talk to your fellow Neuron members, improve equipment, run training programs, changes your clothing, and more. It’s your main hub, and there’s a kind of anime wackiness to a lot of the characters you interact with.

While combat is certainly where I’ve been most impressed so far, Astral Chain’s story is plenty interesting itself. I cannot overstate how much this game feels like a playable anime, and the whole humanity on the brink of extinction thing works well.

The story is highlighted by slick as hell cutscenes and a fantastic soundtrack that really accentuates the action and intensity. Astral Chain is easily one of the best looking games on the Nintendo Switch, and at times I find myself blown away that the game can run as smoothly as it does on the little system.

I’m absolutely hooked on Astral Chain right now, and I’m having serious flashbacks to the first time I played Vanquish, Metal Gear Rising, and Bayonetta 2. It’s easily one of Platinum’s most complex games yet, both in terms of gameplay and story, and while I still have plenty to play, let’s just say Astral Chain has made a good first impression.