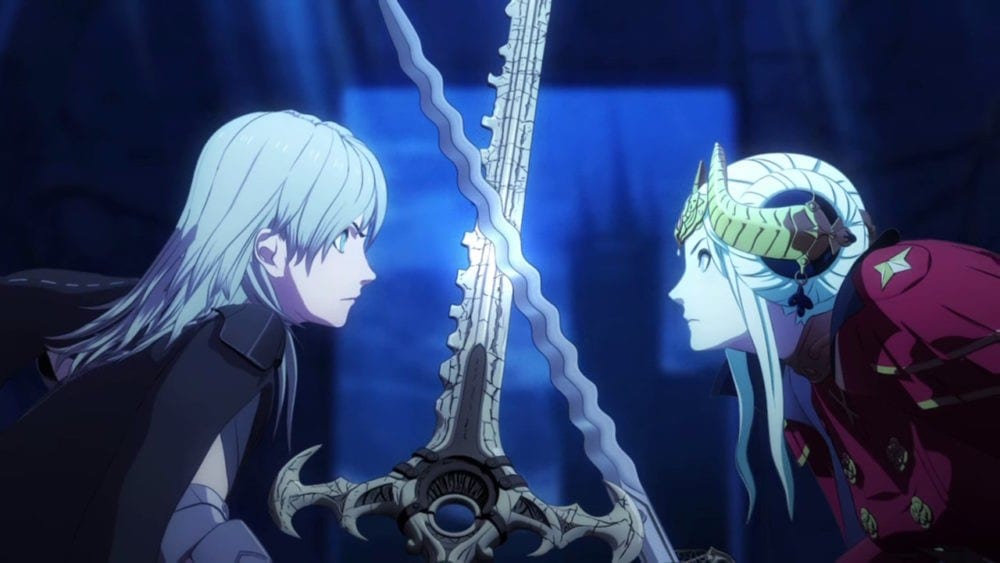 Fire Emblem: Three Houses serves as a fantastic, one-shot, standalone experience. But did you know that, under the right circumstances, playing through the game a second time can lead to some sad times?

My first run with the game saw me aligning with Edelgard and the Black Eagles. Somewhat interestingly, this route presented some pretty major decisions you had to make very early on in the game, which involved Byleth taking a more active role in the rise of the Adrestian Empire and helping Edelgard become the new emperor.

As you approach the end of the first act, you learn more about Edelgard’s own motivations and her disdain for the Crests. She wants to tear down Fodlan and rebuild it from the ground up. She wants to create a meritocratic society in place of the idle church worship that exists now.

By the end of that chapter, you realize that it’s Edelgard versus the world, as the Kingdom of Faerghus allies with the Church of Seiros to take her down.

While Claude and the Leicester Alliance are… off somewhere, doing who knows what.

Anyway, Edelgard’s ambitions are admirable. She believes in equality, and is willing to do whatever it takes to make that new dream a reality. Her methods are callous, but I found myself drawn in by her single-mindedness and determination to build a better Fodlan.

And, y’know, it’s way easier to side with her and see the Church of Seiros as the bad guys when you’ve got a shady as hell Archbishop like Lady Rhea.

This woman is so obviously shady it hurts.

At the end of my first playthrough, I was completely satisfied with the conclusion I had come to, but of course, I had to see the other side of the story as well. So I jumped straight into a second playthrough, and this time, I sided with the Church.

Right off the bat, the tone of the story in Fire Emblem: Three Houses feels completely different than if you had sided with the Black Eagles. As I mentioned in my review, there are so many little hints and details that subtly point towards Edelgard’s secret identity as the Flame Emperor, and you start to pay more attention to her words and actions.

Edelgard quietly nudges Byleth to her side by slowly bringing up her own ideals and ambitions for a Crest-less world, she talks about having to make hard decisions. And all the while, as you’re aligned with the Church, you’ve got Rhea at your side telling you that you’re doing right by the Goddess, and that she’ll rip the hearts out of anyone who dare opposes Seiros.

All with that light smile on her face.

Siding with the Church in Fire Emblem: Three Houses feels incredibly unsettling, which is weird, because you are supposedly on the path of righteousness, compared to Edelgard’s nihilistic tendencies.

It’s got everything to do with the fact that you know Edelgard’s vision for Fodlan is likely the best long-term outcome, but the Church lures you over to its side with the argument that Edelgard is starting a large scale war that will result in the deaths of countless innocents.

There’s also the uncomfortable fact that you’ll never quite know the full truth of Byleth’s past without staying with the Church and Rhea, especially once Sothis’ identity as the Goddess is revealed.

On paper, the Church route in Fire Emblem: Three Houses should be seen as the canon story route to take: it’ll likely answer most of your story questions about Byleth (questions that Edelgard, or any of the other House leaders for that matter, would never be able to answer).

Plus, you’ll be keeping peace in the world by killing the mad emperor who’s trying to reshape the world to fit her own ideals.

When you just wanna say ‘yes’ to Edelgard, but the game won’t let you because you already made your choice, you heathen.

And yet, the writing in this game is so well-done that you can’t help but get that sinking feeling in the pit of your stomach when it finally comes time to sever ties with the Adrestian Empire and oppose Edelgard.

The game makes sure to hammer home the element of tragedy that underscores the Empire and Church’s irreconcilable differences such that even when you’re in the supposed role of the “good guy,” you never stop questioning your actions and wondering if you’re actually on the ‘right’ path.

Fire Emblem: Three Houses is a really tightly written game with believable characters that have complex motivations. Regardless of which path you choose, people are gonna get hurt, and there’s no clean way to wrap everything up.

Like all three House leaders, the best you can do is make peace with the choices you’ve made, and hope that your determination for your vision wins out over the rest.