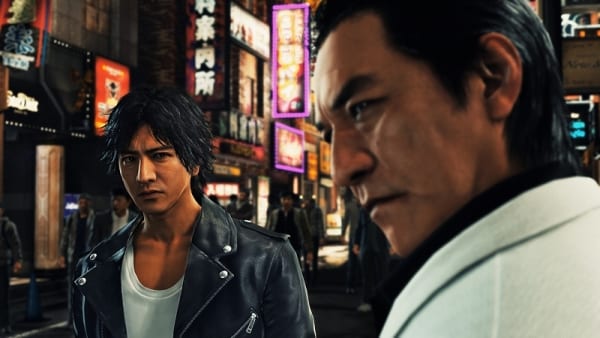 Yakuza can be a daunting series to start with so many different entries across over a decade. You have a prequel, numerous spinoffs, and six mainline games; all of which are known for being lengthy experiences.

With Judgment, however, Ryu Ga Gotoku has created an incredibly unique opportunity; introduce new players to the Yakuza formula, without any of the trappings of a long-running series.

You play as Takayuki Yagami, an ex-lawyer who’s turned to detective work after a client he acquitted committed murder. The story still heavily involves crime syndicates and the Yakuza, but there’s definitely more of a mystery/noir tint to everything.

Judgment is more accessible than Yakuza as well, because of its full English dub. While Japanese is, of course, still an option, the English voice cast does a phenomenal job at bringing unique takes on their characters, while still keeping the heart of the game alive.

When I say Judgment uses the Yakuza formula, I really mean it, as the game uses almost exactly the same gameplay structure. You play through the main story in a linear fashion, but can explore the city at your leisure and partake in its many services and side content.

Judgment is technically open world, but it’s not a massive one. It’s more a contained zone that grows and changes with new opportunities throughout the game.

As you run around the city, groups of thugs will confront you transitioning into combat which plays out like a third-person brawler. While there are combos Judgment, and Yakuza, aren’t super complex character action games. Instead, imagine something that kind of finds a happy middle ground between games like Dynasty Warriors and Devil May Cry.

More than anything Judgment lets you live life in a Japanese city, experiencing its culture and quirks while interacting with some truly bizarre citizens, like an actor who’s far too into his role as a vampire, or a guy who challenges people to hit him in a fight called Mr. Try and Hit Me.

There’s just so much to do in these games, and Judgment is one of the longest Yakuza-like games in a while. There are tons of Side Cases to play through, friends to make using the game’s Friendship system, minigames to play, and more.

Judgment is so uniquely Japanese, and that’s a great thing, but its dramatic main story is universal; it’s something anyone can get invested in and enjoy.

If you’re a fan of crime thrillers Judgment has that in spades, and you can focus on just the main story if that’s what you want. But if you want the full experience of what the Yakuza games are about, Judgment has that for you as well.

One minute you’re saving a sweet shop owner from a group of thugs, and the next you’re using your drone to find the cat of a dead Yakuza chairman. The game strikes a balance between the silly and the serious so so well, and it’s able to effectively flip flop between the two without it getting out of hand.

What might be most important to tell any newcomers about Judgment and Yakuza, however, is that these games are nothing if not genuine. There are truly heartfelt stories in both the main content and side content. The characters grow and change throughout the experience, and have complex motivations.

Judgment truly wants you to care about its characters, and its great writing goes to extreme lengths to make that happen.

If you were intimidated by the Yakuza series before, and how much its steeped in Japanese culture, Judgment is your very best way to see what it’s all about.

It’s undoubtedly the most accessible, easy to grasp game that Ryu Ga Gotoku Studio has made in years, and it hones that Yakuza gameplay formula to a bright sheen.

I sincerely hope we get more Judgment in the future, but if not, then hopefully at least trying Judgment might attract more people to the seriously underrated Yakuza series. If you’re looking to find out even more about Judgment before jumping in, you can take a look at our full review.