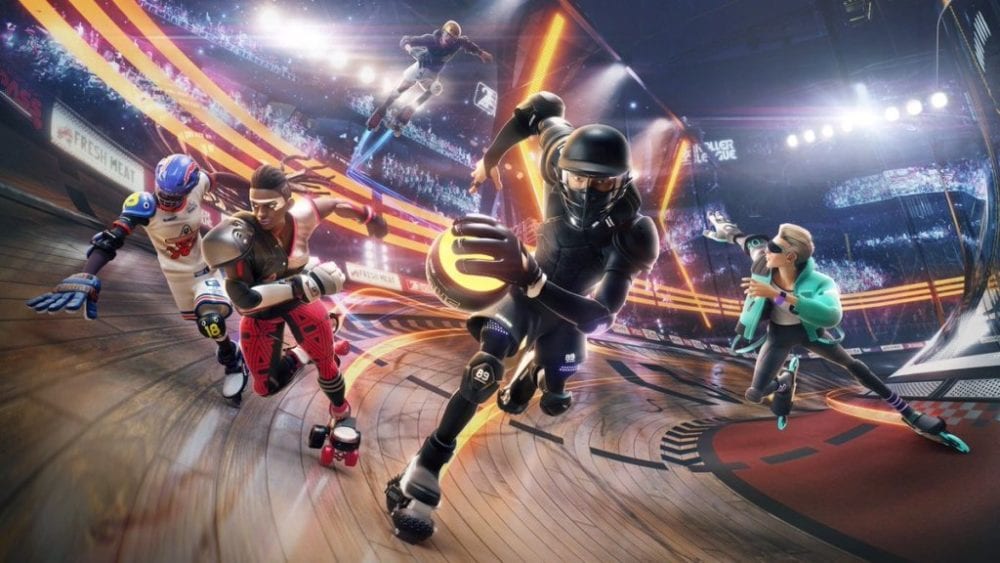 The likes of Rocket League, Everybody’s Golf, and even the Mario franchise have all found success in adding quirk and fun to existing sports. They all present a colorful and different version of the sport, without losing the intricacies and competition that make them so popular in the real world.

Everybody’s Golf requires precise swings and attention to detail, but it’s Rocket League’s blend of simple goals and fast, difficult to master gameplay that Roller Champions is most similar to, which is a testament to how promising it is.

Whether you know roller derby as a sport or not, which I didn’t before playing, Roller Champions is easy to understand.

It’s a 3v3 team-based multiplayer game, taking place in a small arena, and the aim of the game is to throw the ball that’s dropped into the arena through the small hoop on one side. However, it’s not just a case of rolling up to the hoop and chucking it in.

There’s a start line under the hoop and you need to pass it with the ball in your hands at least once before you do another lap and try to score.

Once you get to grips with the controls, matches become really fast paced too. You accelerate by holding R2, as you would in any racing game, but just using that will see you slowly roll around the arena, unable to get the ball or catch other players.

To pick up the pace, you need to use the slopes on the sides of the track. By accelerating up one side and holding L2 while going back down, you can gather momentum that’ll help you get away from your opponents or get into better positions for passes.

When you start being able to speed around the track, it’s great fun, and it’s all made more hectic and tactical by the tackling and dodging system. By pressing X/Square, you can push the other players over.

It’s not exclusive to those carrying the ball, though. You can use a tackle to stop potential passing moves or to allow a teammate to approach the ball carrier with fewer opponents to get past.

You can also develop defensive formations of sorts when another of your teammates is carrying the ball. When your team has the ball and you’re trying to complete a lap, it’s helpful to follow the carrier while looking back at the chasing opponents.

You can lock onto the ball like in Rocket League, but it’s often more beneficial to track the other team than the ball.

Doing so allows you to block the best skating lines between you and the ball carrier, giving them space to race away and have time to shoot without being under pressure.

It’s this potential for tactical play that makes Roller Champions so intriguing. It’s much more than a race around a track. There’s the possibility that players will begin to master the tactical elements and create really cohesive team performances.

It’s not an easy game either. Due to the pace of the skating, once you get used to the movement, you pass the scoring hoop at quite a pace. While you’re skating past, you need to hold LB to aim and then direct the arrow that shows where the ball will go.

Readying yourself, aiming, and releasing the ball all has to be done in fractions of a second, and it takes a lot of getting used to.

The first game of my demo reached the seven-minute limit with just one point scored by either team. Everyone kept missing what are probably easy shots, just because getting to grips with the mechanics is tricky.

There are ways to improve your shooting, though.

Jumping slightly before aiming your shot allows you to stabilize your position, making it easier to land it successfully. However, it’s another button to think about pressing as you try and score, adding another layer to it.

It’s just another way that quality players could show off if Roller Champions proves to be popular. Simply the potential for that puts the game in a great spot for success, though.

There’s also a risk and reward that plays into the scoring system. The matches we played were first to five, and they could have theoretically ended in a matter of seconds.

Completing three laps, while possible, is really difficult, especially if you’re against a team that is even remotely competent at defending or keeping up their speed.

Deciding whether it’s worth sacrificing the easy point for the possibility of three or more is an important choice to make, and you need to take into account player positioning at the time, the quality of your opponent’s defensive play, and you’re own shooting ability.

There will also be the ability to customize your character’s look in the full release, and there will inevitably be all the funky, themed arenas that would add some variety to the standard roller derby format.

Roller Champions’ gameplay is fluid, fun, and deep enough that I can see quality players pulling off great goals and making everything look really easy in the future, making it the next Rocket League style arcade sports hit.