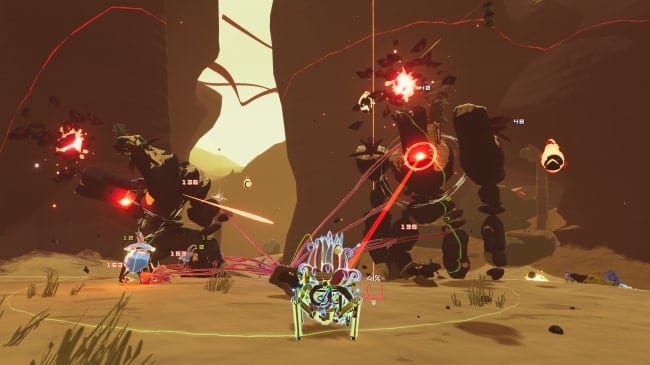 As part of Risk of Rain 2’s Scorched Acres update that released this week, players can check out a new biome, a whole host of new enemies, new gear, and most importantly they can unlock Rex. Rex is a robo-plant, as we like to call him, and he’s a pretty nifty new character. Problem is, unlocking him requires some work. Here’s what you need to know to unlock Rex in Risk of Rain 2.

How to Unlock Rex in Risk of Rain 2

Rex is unlocked by completing the Power Plant challenge, which involves transferring a Fuel Array from your pod all the way to his broken body hiding in the Abyssal Depths.

The first step you need to take to get Risk of Rain 2 Rex is to go straight behind your pod upon crashing into the earth. From there, head around behind your pod and you’ll be able to interact with it by pressing E (most likely). This will give you a piece of equipment called the Fuel Array.

There are a few things to note about the Fuel Array here with regards to unlocking Rex. First and foremost, if you choose to play as Mul-T, it won’t drop in a pod. Instead, it lands in a giant crate that doesn’t have the Fuel Array in the back. You can go and grab the array from any of your teammates’ pods, though, should you find yourself in this position.

Second, the Fuel Array will explode if you hit 50% HP or less. This will kill you and also deal significant damage to any of your teammates within close proximity. As such, do your best to avoid taking damage while carrying the array, as not only will you be unable to unlock Rex… you’ll also be dead, and that’s no fun.

From here, you then need to advance through to Stage 4 which is the Abyssal Depths. At this point, you’ve got to keep an eye out for the broken robot, Rex. He can be found on the second highest platform in the center of the Abyssal Depths.

Interact with Rex by pressing E and you’ll slot the Fuel Array into him. After that, you’ll have officially unlocked Rex in Risk of Rain 2.

All Rex Abilities in Risk of Rain 2

That’s everything you need to know about how to unlock Rex in Risk of Rain 2. For more tips, tricks, and guides on the game, be sure to check ’em out below.