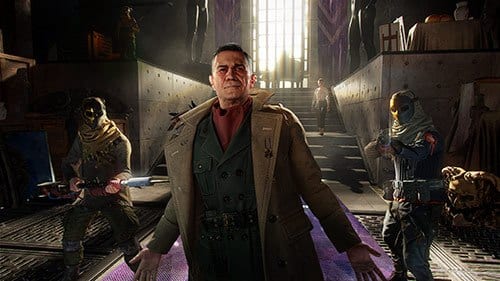 Dying Light 2, the sequel to Techland’s parkour focused open world game, was initially revealed last year. Adding to the few glimpses we saw of the game in the first announcement trailer, we were treated to some more information at both Square Enix and Microsoft’s E3 2019 press conferences.

Twinfinite also had the chance to attend a behind closed door presentation that included a 30-35 minute extended demo that looked deeply at the choice based narrative that’s going to be a huge part of the new game.

Following that demo, we had the chance to sit down for Dying Light 2’s Lead Game Designer, Tymon Smektala, to go into more detail about the choices in the game and how the new narrative will play into the gameplay.

Tom Hopkins: With the story choices, in which ways will you see the consequences play out, will it be big area focused ways, or smaller ones as well?

Tymon Smektala: Okay, so, the choices and the consequences work on at least a few layers in the game, so of course there are huge decisions that you make in the main story missions, and you could argue they have the biggest impact on the narrative and on the city, but that’s not the only choice you make in the game.

The other layer of this is, you make choices as you play missions and a lot of those missions, they have smaller choices which either change how the actual mission plays, so by your decision you can make it a more stealth like mission or more all out guns blazing, well, machetes blazing experience.

So, for example, there are encounters where you see survivors trying to do something and you can admit, you can say ‘that’s not my problem’ but you can start interacting with them and you can start helping those guys and suddenly they will start helping you as well so you will see they will start installing line bridges, or ziplines, or and those rope elevators you can use to get to the roof – a lot of different things. Or they can help you in combat. Or they can help you with respawns.

All of those smaller, open world sandbox gameplay elements you can activate or deactivate, turn on or turn off depending on you choices. Also, some things we’ll keep hidden from the player, for example, there’s a moment where, if you fight with bandits, sometimes, let’s say you kill two guys from a group of three bandits, so the last guy is begging you for mercy, so it’s up to you.

I want to kill him, because he’s a bandit, or maybe you will save his life, and we track those things as well and because of the choices you make in those moments, we also change some things in the city and, again, on the consequences side, there are at least two levels of this.

One is the narrative consequence, where it changes how the story flows, and the other one is, of course, the open world sandbox narrative level where you shape the city around you.

Tom: So, will that lead to multiple endings?

Tymon Smektala: Yes, so there are multiple endings, we are not revealing the number, mainly because we are still arguing about some of them, if we still want them, is this really something we want to have in the game, maybe this is too controversial or something, so, there’s a discussion between the narrative team and basically everyone involved.

We still looking down exactly the exact number of endings, but yes there will be multiple endings in the game.

Tom: How does the map in Dying Light 2 compare in size to the first game?

Tymon Smektala: The map is about four times as big as all the maps from the first game combined, so it is a huge game. The city is made of seven very different regions, the important bit is that you travel between them seamlessly without any loading screens.

It is just a huge map through which you travel, but we spent a lot of time making sure those districts really create different types of gameplay, and have a different flavor when it comes to gameplay, so we did this by introducing specific parkour moves that only happen in specific places or by introducing enemies that appear only in specific areas or some additional gameplay mechanics that only happen here or there.

Tom: How do the factions in the game differ, and can you balance their control?

Tymon Smektala: So, yes, the important thing is that you never really join any factions, you just interact with them. Aiden is this guy, he has this outsider mentality, he doesn’t really want to blend with anyone.

So those two factions  have a very different outlook on what they can do to actually survive for the next day, or week, or month, or maybe even, I don’t know, years.

Though, to be honest, not many people think with that perspective in our world, because this is basically survival on a daily basis. But aside from the Scavengers and the Peacekeepers, we have smaller groups, smaller factions like The Renegades and a few others like that which don’t really control the city, don’t really fight over control of the city, don’t really want the city to follow their agenda, their philosophy, but are still a very important aspect of the narrative or the open world.

We also have smaller groups that you could compare to the Fishermen village from the first game, just small groups of people who try to find themselves between the hammer and the anvil that the Scavengers and the Peacekeepers are.

Tom: With Aiden being infected, how will that play into the gameplay?

Tymon Smektala: So, yes, this is an important factor in the gameplay because when you go inside dark places you, and also when you go outside during the night, the immunity that you have to the infection, it goes down, and when it goes down, basically, you die, you turn into a zombie.

So, it’s very important for you to keep that immunity high and this is something you can actually improve as you play the game.

But at the start, you cannot really do that, but you want to since a lot of missions, they have quite interesting variations when you play them at night. Or, you also want to do that because during the day, the zombies, the infected, they stay inside building, and if there’s anything else to loot, it’s inside those buildings, so you really want them to get out during the night, so you can venture in and you can creep inside so you can get as many components for crafting and other stuff that you can sell.

This is an important part of the gameplay and this is something we really play with a lot.