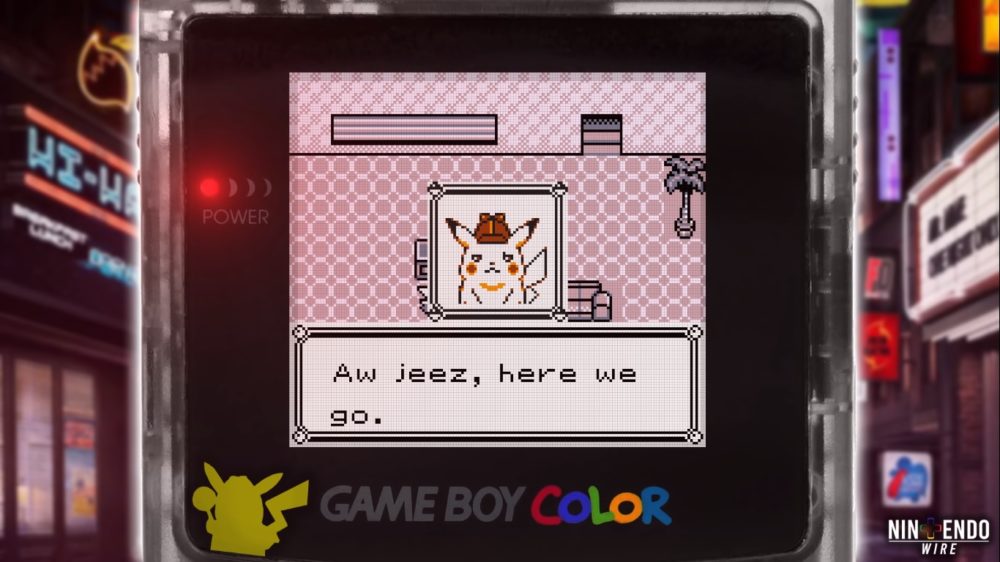 Detective Pikachu hits theaters tomorrow in the US, and has already had advanced screenings in some places worldwide. In celebration of the film, Nintendo Wire released a video that recreates some of the most well-known scenes from the trailers in classic Game Boy Color style.

The “game” opens in a Game Boy Color window with a text box telling us “Welcome to Ryme City”. The YouTube video is just under a minute long but covers all a ton of key Pikachu scenes and gives them a Pokemon Yellow makeunder in what they’re calling a “de-make”. We even get a little box pop up to show us Pikachu’s(usually exasperated) expressions.

Anyone following the Warner Bros. movie will recognize these scenes by now from the insane amount of trailers and teasers that have come out over the past weeks. From Pikachu’s(Ryan Reynolds) first meeting with Tim(Justice Smith) to his cage fight with a Charizard, all the major scenes get an 8-bit re-imagining.

If that wasn’t already high-effort enough, the video is also set to one of the songs in the movie’s soundtrack and promotions, treating us to a peppy chiptune version of The Turtles’ “Happy Together”.

The only downside to this adorable tribute – it makes us want a real retro Game Boy Detective Pikachu game to play.

If you’ve somehow managed to avoid hearing about the live-action/CGI hybrid movie based on the 3DS game, Detective Pikachu centers on Tim Goodman, a former Pokemon trainer and the son of prominent Rhyme City detective Harry Goodman. As Tim investigates the mysterious disappearance of his father he’s joined by Harry’s former partner, who just so happens to be a Pikachu. Together they explore the city in search of clues as they unravel the mystery surrounding Harry’s disappearance.

You can check out Nintendo Wire’s Detective Pikachu: Game Boy Color Remake down below. The movie officially comes to theaters tomorrow on May 10.