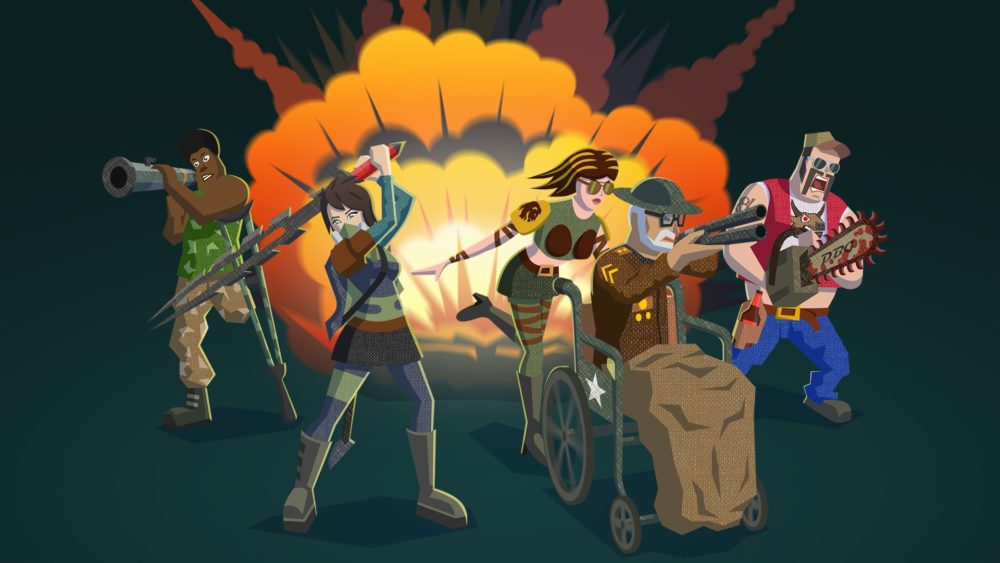 If you’ve never heard of the zombie game Infected Shelter, I wouldn’t blame you. It’s an indie titled developed by the two-man developer team Dark Blue Games, so it doesn’t have the marketing budget of something like Days Gone. However, that doesn’t mean Infected Shelter isn’t worth your time.

Even though the game is in Early Access and far from finished, this “randomly generated rogue-lite post-apocalyptic action RPG shooter/dungeon brawler” the developers describe as “Mortal Kombat + Dead Cells + Castle Crashers” still provides an enjoyable, if repetitive, experience that will scratch many a gamer’s itch.

Before I continue, I should clarify that this preview is based on the Early Access version of the game. Infected Shelter isn’t finished yet. If you decide to pick up the title, please remember that future patches might render some of my points moot.

The graphics aren’t for everyone, but they hit home with me and mitigated the game’s somewhat repetitive nature. I must have spent 90% of my time wandering linear “corridors” (assuming you can call wooded paths flanked by impenetrable underbrush corridors) and slaughtering zombies, military officers, and robotic drones.

Credit where credit is due, the corridors are randomized. I must have entered the same underground tunnel about fifty times, but whenever I was about to become bored, I stumbled into a new area such as a grove of pear trees or a post-apocalyptic flea market, which kept me invested and wondering what new, snazzy locale I would find next.

As a dungeon brawler, Infected Shelter is all about brawling enemies, and each zombie, soldier, and robot features a unique skill that kept me on my toes. Not only does Infected Shelter provide a steady drip-feed of new enemies —none of whom are pallet swaps— it even ups the ante with bosses.

I restarted the game numerous times (it is a rogue-lite, after all) and encountered the same three bosses over and over again. But, whenever I found one boss early in a run, I was pleasantly surprised when I bumped into it later during another run and discovered the boss had a few new tricks up its sleeves.

However, fun enemies are nothing without fun combat, and Infected Shelter’s combat system is about what you’d expect from a dungeon brawler. The game uses a simple weak/heavy attack combat system and sprinkles in some simple blocks and dodges for flavor.

Infected Shelter also adds some synergistic elemental damage. Fire damage, for instance, normally takes little nibbles out of enemies over a short period of time, but fire damage dealt to an enemy drenched in oil consumes them faster than a blue whale at a krill convention.

Plus, Infected Shelter implements a simple fatality mechanic that lets characters instantly finish off stunned enemies, and these finishers are as bloody as they are satisfying.

Even though Infected Shelter’s combat is simple and fun, it’s not perfect. The game consists of 2D characters fighting on a 3D plane, but hitboxes aren’t very reliable.

I can’t count the number of times I attacked an enemy and missed because I was a pixel or two behind them. This made judging where to attack difficult, a difficulty that was mitigated when enemies started swarming the screen. Even when I didn’t hit my intended target, I usually hit something.

Now, you’re probably wondering where the RPG aspects come into play. The answer starts with the characters, only two of whom were available. These were the Guitar Girl and the Granddaughter and Grandfather.

The Guitar Girl is a glass cannon with high attack and low health, whereas the Granddaughter and Grandfather is a bit more tanky with more health and lower attack.

The Grandfather is in a wheelchair, and his Granddaughter tends to use him as a battering ram/mace. Infected Shelter might be post-apocalyptic, but it features a quirky sense of style that’s a welcome change of pace from other modern zombie games.

As an added bonus, each character’s name, clothes, and equipment (guitar for Guitar Girl and wheelchair for Granddaughter and Grandfather) is randomized for every run, which made me feel as if I was controlling a different character each time.

Plus, I unlocked a pool of randomly assigned character traits after I defeated the first boss. Name another game where you can play as an ornithophobic guitarist or an old man with osteogenesis imperfecta.

Infected Shelter also includes quite a few RPG-esque lootable items. Some drop from enemies, while others are bought in shops with in-game cash. However, the most reliable source of loot is treasure chests that fall from the sky whenever an area is cleared of enemies.

Most items are simple, mundane things, such as healing doughnuts and fried ducks, katanas and pistols that break after a few minutes, and clothes/equipment with different stat bonuses. Other items, however, are a bit more supernatural.

These include runes that provide stackable passive stat buffs, relics with various and situational passive abilities, pets that attack enemies, skills that do everything from summon attack eagles to smite enemies with lightning, and one-use items that are basically pocket skills.

Early runs in Infected Shelter only doled out a few basic weapons, clothes, relics, and skills, but as the game progressed, I began to see the Dead Cells inspirations as I collected blueprints and used them to unlock new, more powerful items for subsequent runs.

Some were mundane tools, such as a gas mask that reduces gas elemental damage, while others were mystical artifacts, including a golden spade that summons a giant, spectral Shovel Knight. Plus, some blueprints unlocked permanent, passive boosts such as increased health and one free resurrect per run. However, these blueprints weren’t very balanced.

Most blueprints need 30 or 50 Infected Samples, including mundane tear gas rifles, golden apples, and magical flaming maces. And, since enemies bleed Infected Samples, I unlocked several blueprints every run, which diminished the awe I felt when I gained epic and legendary items.

Infected Shelter also adds one more notch to the progression belt with followers. As I traveled the game world, I occasionally found other survivors trapped in cages. Once freed, they joined my settlement (which I only saw at the beginning of each run) and provided bonuses such as additional skills and extra starting items.

Like the permanent improvements, these followers were a welcome addition that made me feel like I was going somewhere, even though I was revisiting the same corridors over and over again. And, some improvement blueprints even upgraded the followers with better swag. I started many a run with a golden spade in one hand and a skeleton-summoning skull in the other.

Infected Shelter, as an Early Access title, is fairly polished, but it’s not quite there yet. I already mentioned the unbalanced blueprints that can be fixed with a balance patch, but the game also requires some other tweaks. For example, stats aren’t clear. One stat is called Serendipity, but what is Serendipity? Apparently this stat affects Luck, but that raises the question why the stat isn’t called Luck in the first place.

Infected Shelter also has some editing issues. I couldn’t help but notice a few mistakes, such as misspelled words (e.g., Strength is misspelled as Strenght) and iffy grammar (e.g., Head of a Dead).

However, Infected Shelter’s biggest issue is its repetitive content. Even though I occasionally entered a new area, I didn’t encounter them often enough. Many gamers could potentially be turned off by revisiting the same abandoned streets, tunnels, and woods ad nauseum.

To make matters worse, Infected Shelter doesn’t feature any story save for a cutscene that plays at the start of every game session, which doesn’t do the title’s repetitive nature any favors. Also, on a side note, I think the blueprint that promises one free relic from Chief doesn’t work.

Despite Infected Shelter’s problems, I’m hopeful for the game’s future. Infected Shelter will probably keep me coming back for more in my never-ending quest to improve my skills, discover new areas, and find new blueprints.