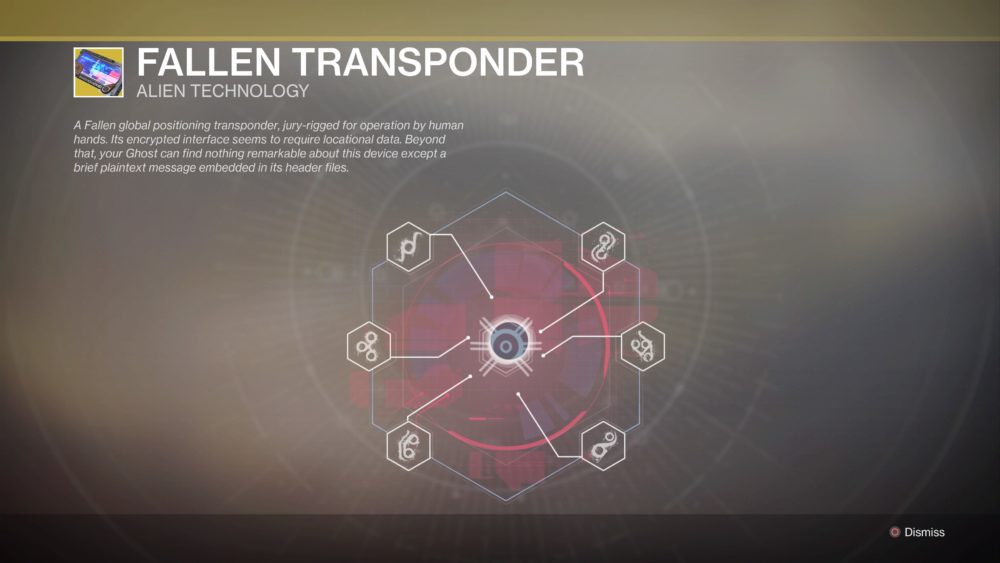 One of the most popular and famed weapons from the original Destiny, Outbreak Prime, may now be available in Destiny 2 following a surprise update on May 7. Here’s how to start the Outbreak Prime exotic quest so you can join in on trying to piece together the clues for getting this prized Pulse Rifle.

The quest pursuit item that you’re looking for is the Fallen Transponder. This pursuit contains all of the clues for completing this part of the Outbreak Prime exotic quest. You can’t progress until you have this.

To get the Fallen Transponder and get started on the Outbreak Prime quest in Destiny 2, make your way over to Titan and start the heroic adventure called Bad Neighbors.

It’s currently available via the director as of the initial week of the launch of this quest. Simply track it from the Titan map and head on over to it via the Siren’s Watch landing zone.

Once you’ve started the heroic adventure, make your way through the first few steps of the adventure as normal until you run into a Shrieker that is guarding a narrow hallway. Clear the room, including the Shrieker, to make your life easier.

From there, the quest wants you to go straight through a locked door in the room directly behind the Shrieker, but you’re not going to do that.

Instead open the unlocked door to the left (see the image above), and you’ll gain access to a new area. Head down the stairs to the right and make your way into this lab of sorts.

On a table near the center of the room you’ll find a fallen device that looks like some kind of datapad (see below). Interact with it and you’ll obtain the Fallen Transponder. This will unlock the pursuit for the Outbreak Prime exotic quest in your inventory.

As of this posting the Destiny 2 community is still sorting out what to do next. It appears, though, that you’ll need to go to various Fallen lost sectors around the Solar System based on the clues that are provided by examining the Fallen Transponder.

As we verify these quest steps, we will update this post.

That does it for how to start the Outbreak Prime exotic quest and get the Fallen Transponder in Destiny 2. As we learn more about this quest we’ll be sure to update this post.