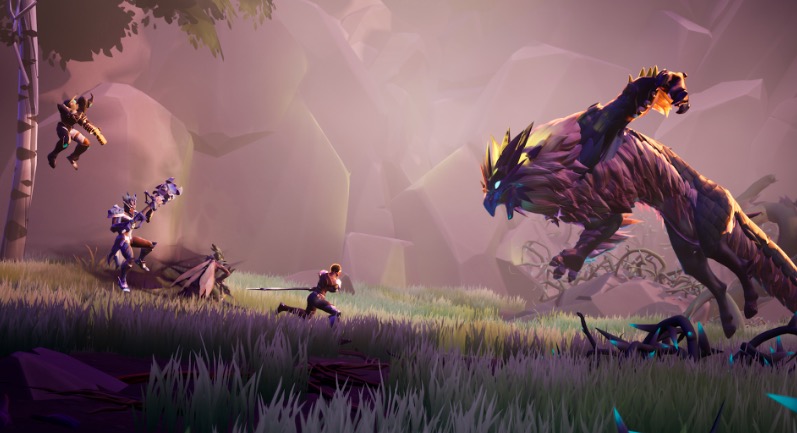 If you’ve ever played Monster Hunter, you will immediately realize exactly what developer Phoenix Labs has done with Dauntless.

They’ve stripped the main components (hunting, grinding, loot, etc) from Capcom’s Monster Hunter series and have made them more accessible and fast-paced than ever before.

Even though Capcom simplified many of the series’ notoriously complicated mechanics with Monster Hunter: World, it’s still a daunting prospect for newcomers.

There are so many systems and things to learn that the game throws at you all at once with no explanation for a lot of the mechanics but once you get the hang of it –after only 40 or so hours– the game gets just a little bit easier to understand.

But to some folks, taking 40 hours to understand only the basics of a video game is way too much time.

I say 40 hours because while Monster Hunter: World may look simple on the outside, there’s tons of stuff that you can dive deep into if you so choose.

There are so many different weapons and armor sets to craft and upgrade, as well as special passive abilities that can be obtained if you equip the proper combinations of items.

The later quests can also become brutally difficult, with monsters being able to take you down in only one hit if you aren’t well-prepared. This might scare people away since the game demands a lot from the player. But Dauntless is another story.

It makes the whole loop of getting online, taking on quests, farming monster parts, and crafting stronger equipment way more accessible than Monster Hunter: World ever has, and because of this, Dauntless has the potential to resonate with a different audience.

This audience is people who have looked at Monster Hunter and have liked what they’ve seen, but may have been overwhelmed and frustrated by the multitude of mechanics and slow-paced combat.

Dauntless seems like it wants you to spend as much as time as you can out in the field and battling monsters. It wants to throw you in the action without requiring you to customize your character’s gear for hours and hours as you do in MH.

Right from the get-go, Dauntless throws you into online matches with other people and the handful of NPC’s quickly go over how the game works, and the rest you’ll pick up naturally and quickly.

It’s not dense at all, but if you’ve ever played a MH game, you’ll feel right at home because Dauntless’ rinse and repeat gameplay loop is almost entirely similar.

You customize your character, equip your weapon/armor, pick a quest, and go kill the monster. You kill the monster, you get rewarded with stuff to make weapons with, and you do it over and over again.

What makes it different from MH, though, is that the monsters are way easier to fight. Dodging is easy to do with pretty much any type of weapon, using items is done quicker and simpler, and the game is just way more forgiving.

I found myself with a group of three other hunters on a quest with us just decimating an enemy by surrounding it and smacking it until it dropped down.

The monsters telegraph most of their big attacks, giving you time to get out of the way and continue to whittle its health down with your squad.

You can even roll right into the Behemoths moves thanks to the invincibility frames, something that would never fly in Monster Hunter.

But even though Dauntless does a great job at giving people a diet or lite version of Monster Hunter that’s fun for all ages, as well as several quality-of-life improvements, the game doesn’t quite live up to the polish and AAA quality that’s found in the Monster Hunter series.

While the maps and locations you visit might be a tad bit empty, the bright colors pop and bring a little bit of life to the world –which definitely helps the game in the long-run, because there’s just not much to do on the maps besides killing the assigned monster.

All there is on each map is a few flowers and rocks to mine, but that’s pretty much it. There’s no detail in the environments and all you have to do to find the monsters is use an ability that will lead you to them.

This will be apparent for MH players, but the simple nature of the game is what gives it a leg-up over MH when it comes to pure accessibility.

By using one of the six types of weapons, you have to hack and slash your way to victory by damaging the monster from above, behind, and any other ways you can get a hit in. Unlike Monster Hunter, Dauntless is very forgiving when it comes to combat.

You still have a stamina bar like MH, but you can pretty much roll out of the way of attacks pretty quickly and without much planning.

Attacking, blocking, and rolling out of the way of deadly attacks in MH has to be planned out because if not, you will end up taking heavy damage very quickly which will lead to your untimely death –even using one potion in MH needs to be thought out, especially in battle.

Luckily, in Dauntless, dying doesn’t mean game over like MH. You can revive yourself or you can reach out to one of your teammates to bring you back to life, and it’s actually done in just a few seconds, bringing you back into the action.

This is something that I really like about Dauntless; it’s fast-paced and doesn’t make you feel like you’re not good enough. It’s all about having fun with friends, showing off your cool weapons, not taking things so seriously.

It might be a straight-up Monster Hunter clone, but if you’re looking for a more chill and relaxed online action RPG that looks like Fortnite, then Dauntless is worth checking out –and plus, it’s free-to-play, so you can’t beat that.